Georges P. Vanier (1888-1967) was a celebrated soldier, diplomat, and Governor-General. For its July 1, 1998 edition, Maclean's magazine commissioned a panel of historians, publishers, academics and artists to list one hundred individuals they considered the most significant in the history of Canada. General Georges P. Vanier was chosen as the most important Canadian in history.


"Among the 55 million people who have lived, worked and loved in Canada over the centuries, a few can claim to have made a real difference. In Maclean's view, one man stands above the others. A man of courage and sacrifice, in war and peace, he exemplified the best in his countrymen... Duty, obligation and service- Vanier epitomized these noble ideals. And as Governor-General he represented in person all those who went overseas to risk their lives for abstract concepts like democracy and freedom-and, yes, duty, obligation and service to a higher ideal than self. Vanier was Canada's moral compass...an unquestioned man of probity and honour. He is the leading Hero-and the Most Important Canadian in History."

The following merely outlines Georges Vanier's career. I recommend that you have a look at the many web sites devoted to Georges Vanier and his family to gain a greater understanding of this great Canadian.

World War I
Georges Vanier was a 26-year old Montreal lawyer when he enlisted in the Canadian Army at the outbreak of WWI. In 1915, he helped to organise in the French Canadian 22nd Battalion of the Canadian Expeditionary Force. Vanier served in France courageously at Passchendaele and Vimy. In late 1918, he led an attack at Cherisy and was shot in the chest and both legs, resulting in the loss of his right leg.
Aide-De Camp to Governors-General
In 1921, Vanier was appointed as aide-de-camp to Governor General Viscount Byng. In 1925 he took over command of the Royal 22e Régiment at La Citadelle, Quebec City. A year later he became aide-de camp for Byng's successor the Marquess of Willingdon.

Diplomatic Career (1928 - 1953)
Vanier' s lengthy diplomatic career began in 1928 with his appointment to Canada's military delegation to the League of Nations. He then served as secretary to the Canadian High Commission in London from 1930 to 1939. In 1939, Vanier was elevated to the position of Envoy Extraordinary and Minister Plenipotentiary to France. 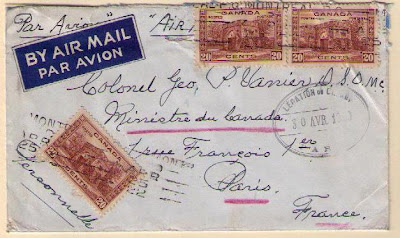 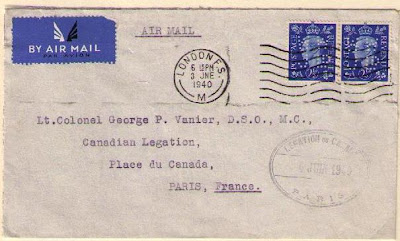 Vanier and his wife were forced to leave Paris in 1940 when the Germans invaded France. 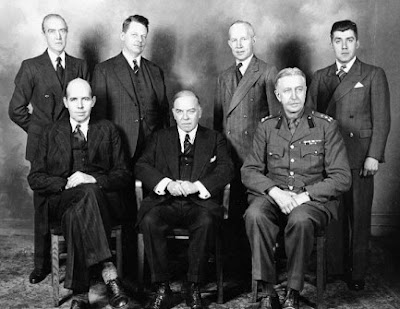 Georges Vanier (seated, right), with Prime Minister William Lyon Mackenzie King (seated, centre), and other members of the Canadian delegation dispatched to the United Kingdom to discuss war planning, 1941.
In 1942, Vanier was named Extraordinary and Minister Plenipotentiary to several governments in exile as well as Canadian Representative to the Government of France in Exile.
Following the liberation of France in 1944 , Vanier's was posted as Canada's ambassador to France, a position he held until his retirement from diplomatic service in 1953.

Governor-General (1959 -67)
Georges Vanier was appointed Governor General of Canada in 1959 to replace Vincent Massey. In spite of the challenges of poor health and political unrest in Canada, the 71-year-old Vanier said of his commission to represent the Queen: "If God wants me to do this job, He will give me the strength to do it."
Despite his poor health, and his doctor's warnings about strain, Vanier travelled across Canada, gaining the affection of Canadians. He worked to promote better relations between English and French Canadians. He focussed on the disadvantaged, young people and seniors. His work organizing the Canadian Conference on the Family in 1964 led to the creation of the Vanier Institute of the Family. 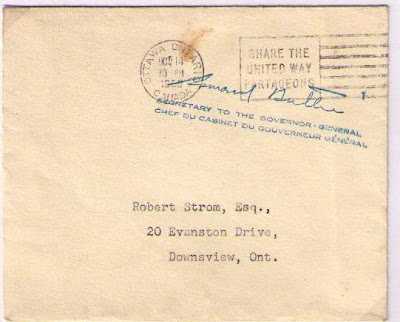 Secretary to the Governor-General handstamp
Ottawa to Downsview, October 14, 1959

Crown on the reverse of the envelope 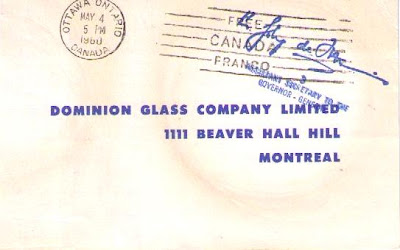 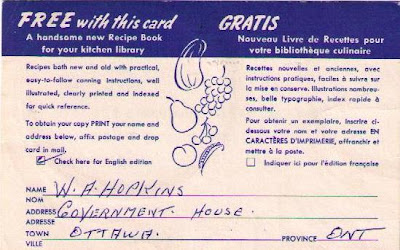 On March 4, 1967, before watching a Montreal Canadiens hockey game on television at Rideau Hall, Vanier had spoken with Prime Minister Lester Pearson and had expressed to him that he was willing to continue on as governor general until the end of the centennial year. On the following day, Governor-General Georges Vanier died. 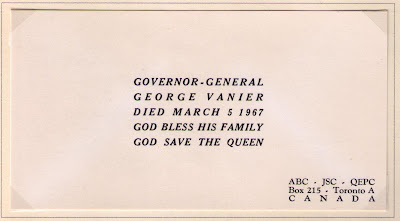 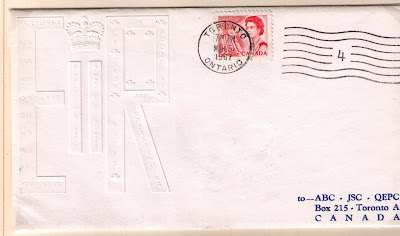 A deeply spiritual man, Georges Vanier and his wife Pauline were nominated in 1992 for beatification in the Roman Catholic Church.

Commemorative Stamp
The Georges Vanier commemorative stamp was issued on September 15, 1967, the anniversary of the day on which he took the Oath of Office in 1959. 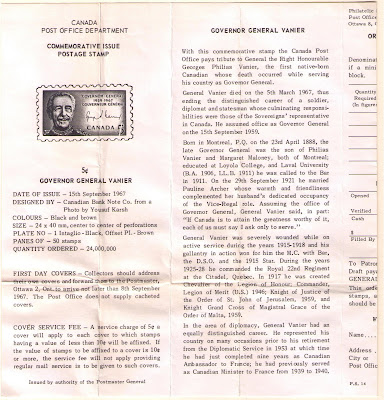 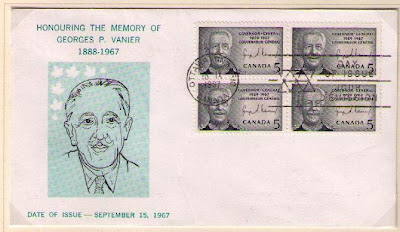 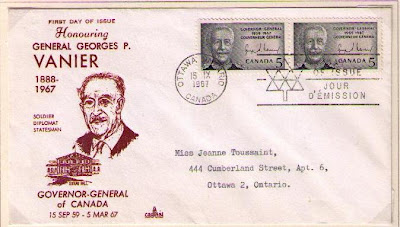 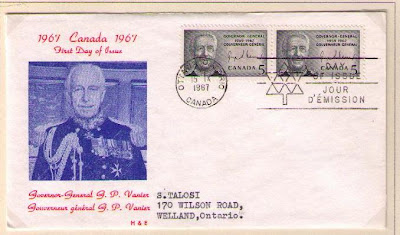 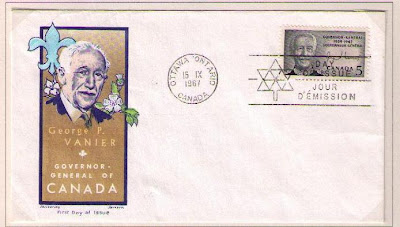 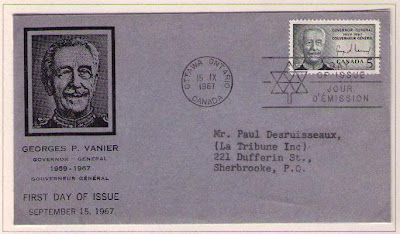 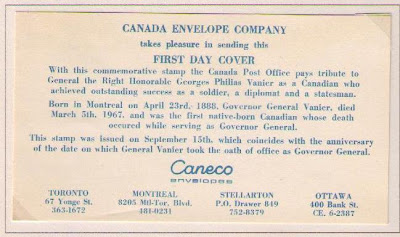 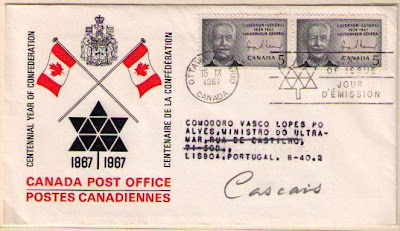 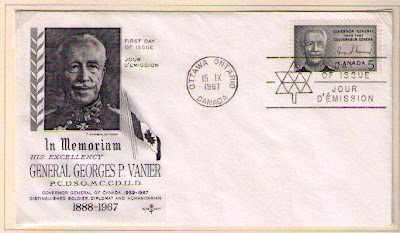 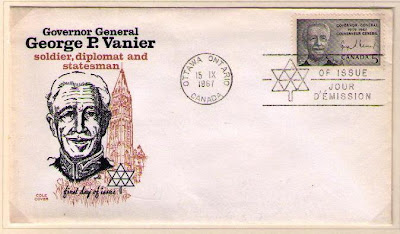 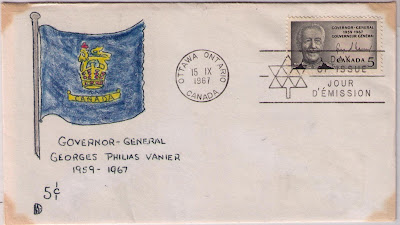 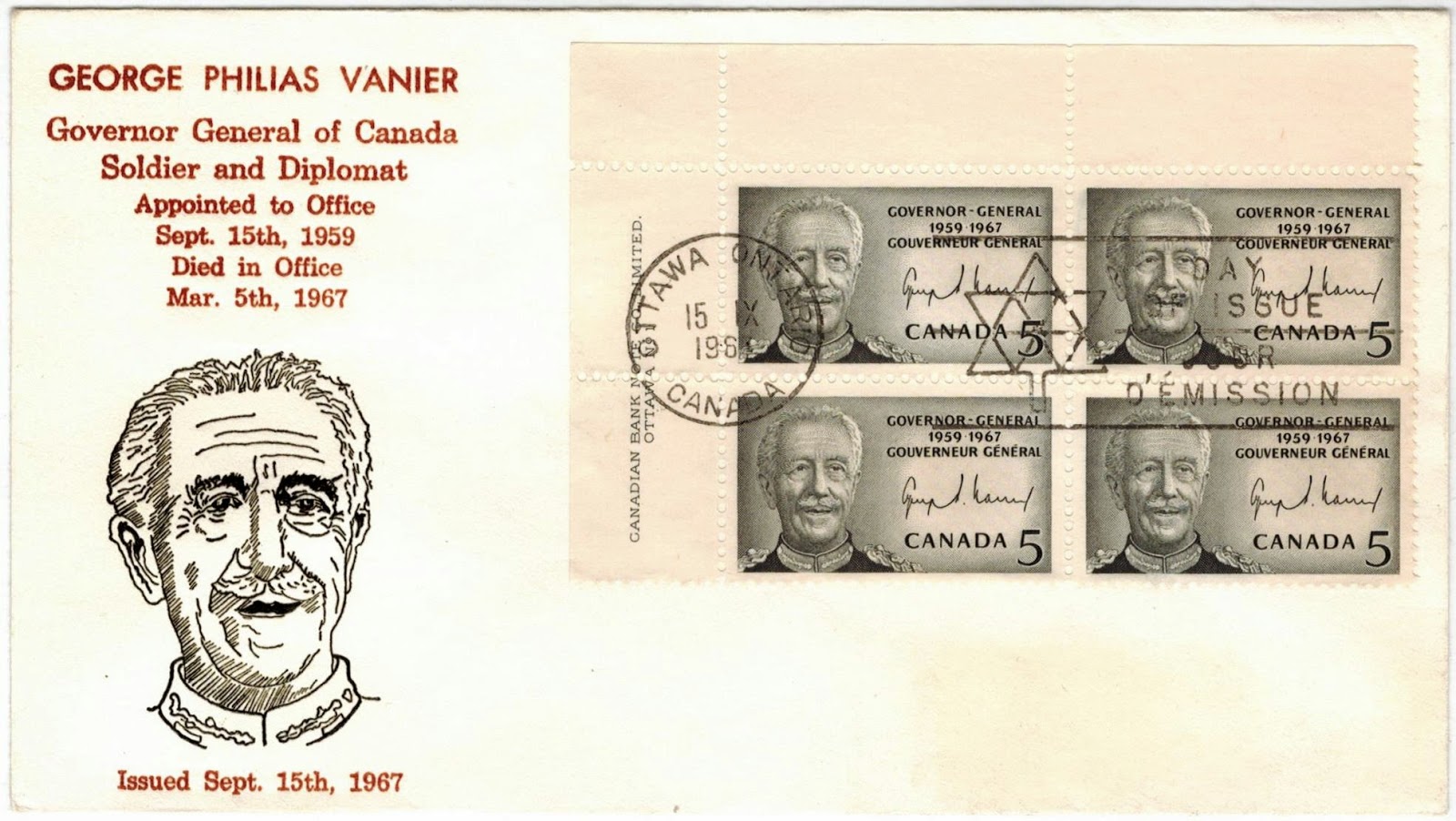 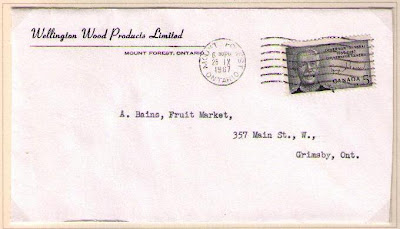 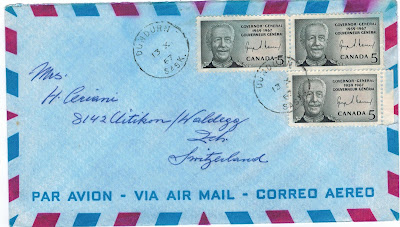 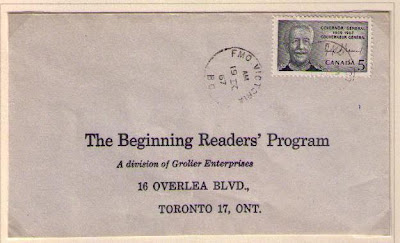