Coronation Review of the Fleet 1953 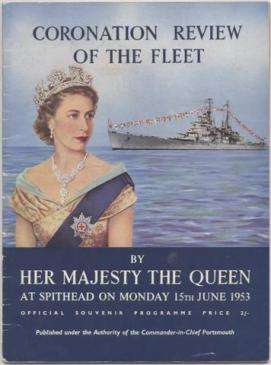 In honour of Queen Elizabeth's coronation, a fleet review was held at Spithead, England, on June 15, 1953. The Coronation Fleet Review consisted of 197 British warships under the command of Admiral Sir George Creasy, together with 13 commonwealth warships, 16 foreign warships and representative ships of the British Merchant Navy and Fishing Fleets. 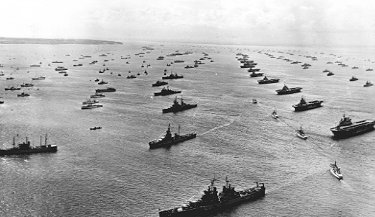 A newsreel of the Spithead Review, which is over ten minutes in length, can be seen at the British Pate website. The film shows Queen Elizabeth reviewing the vast fleet aboard the Royal Yacht H.M.S. Surprise. Photographs of the Review have been posted at the Battleship Vanguard website.

Canadian participation at the Coronation Review consisted of a carrier, two cruisers, one destroyer, and two frigates. HMCS Quebec was the flagship for Rear Admiral Bidwell leading the Royal Canadian Navy ships to Spithead. 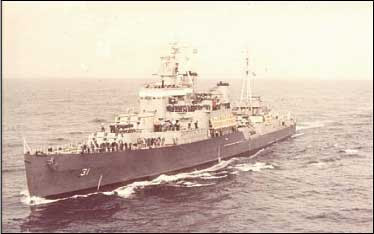 HMCS Quebec (C66) was a Crown Colony class light cruiser that served the Royal Canadian Navy as HMCS Uganda (C66) during World War II. Renamed in 1952, HMCS Quebec served until she was decommissioned in 1956.

Correspondence from HMCS Quebec anchored at Spithead
The forces air letter shown below was written on Friday June 12, 1953 by a crew member on board the HMCS Quebec. It is surprising to note that in this letter to his wife, the writer makes no reference to the extraordinary naval event which was about to take place. 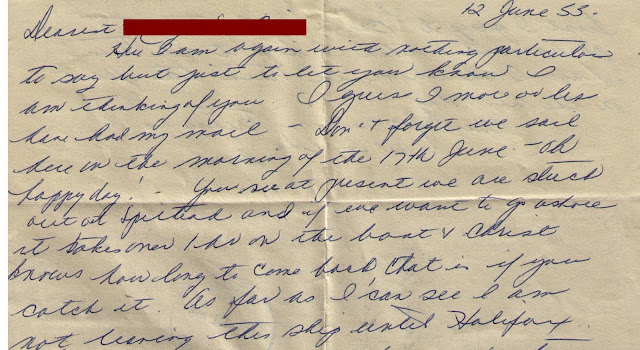 12 June 53 Dearest _______: Here I am again with nothing particular to say but just to let you know I am thinking of you. I guess I more or less have had my mail. Don't forget we sail here in the morning of the 17th June. Oh happy day! You see at present we are stuck out at Spithead and if you want to go ashore it takes over 1 hr on the boat + c__ knows how long to come back, that is if you catch it. As far as I can see I am not leaving this ship until Halifax..

There is no further reference to Spithead or the Coronation Review in his letter. One would have expected some discussion of this historic event which was to take place in a few days. Perhaps the writer exhausted the topic in earlier letters. Another possibility was his reluctance to admit that this was a memorable experience. 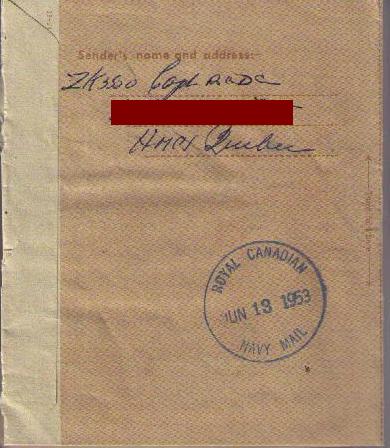 The air letter would have been given to the mail orderly on board the HMCS Quebec. Mail was not cancelled aboard ships, but ship mail was identified by the use of circular cachets. The HMCS Quebec cachet was applied on June 13, 1953. The mail from the HMCS Quebec was probably delivered to the British Post Office in sealed bags and forwarded by air to Canada for cancellation and delivery. 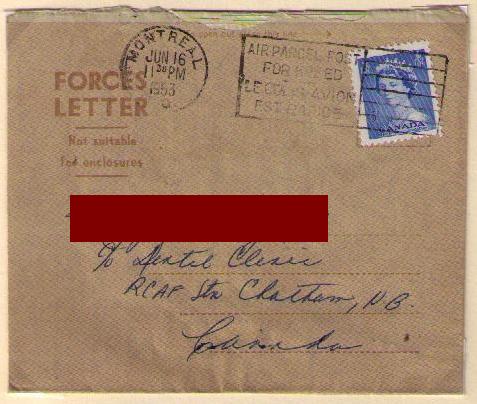 The air letter was received at the Montreal Post Office where it was cancelled on June 16, 1953 for delivery to RCAF Chatham, N.B.

This cover was to be included in an article I was drafting dealing with Navy mail from the Karsh to the Cameo periods. The only reason I was curious about the letter was that I was unable to make out the key word "Spithead" in the letter. I googled several possible spellings without success. I assumed that a search of the Quebec would not be fruitful since the ship would have sailed to many ports during its years of service. Needless to say, attendance at the Coronation Review of the Fleet was an HMCS Quebec highlight mentioned in most web articles.

I must admit that before I did this research I had never heard of the Coronation Review. Looking at the Pathe newsreel was a real treat. I recommend that you have a look.
Posted by philcovex at 3:59 AM