Postal Mechanization During the Centennial Period

The automation of letter cancellation and sorting was at the trial stage when the Centennial definitives were first issued, but by early 1974 the Post Office Department began the national implementation of mechanization.

Collectors of the Centennial definitives are well aware of the automation trials thanks to the many authors who have shared their knowledge of the topic since the 1960s. This article will not try to duplicate those excellent efforts. My objective is to briefly summarize with covers how the Canadian Post Office went from the trial phase to national implementation of automation.

In 1962, the automation of letter cancelling and sorting began in Winnipeg on a trial basis. The system called SEFACAN (segregation, facing and cancelling) was developed in Great Britain.

A tumbling drum sorted mail into size categories. Two of the lengths of mail separated by the segregator are shown below: 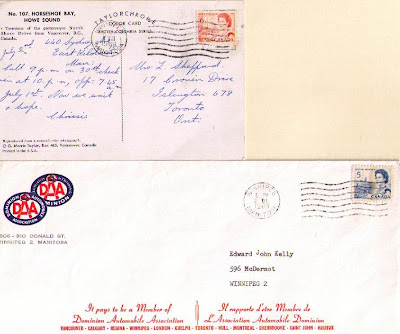 Stamps distributed in Winnipeg were coated with phosphorescent bars (Winnipeg tag), visible under ultra-violet radiation. Harrison and Sons manufactured the "Letallite B2" phosphor applied to the stamps. The machine was designed to detect the phosphorescence and thus the position of the postage stamp on the envelope. The letter was then correctly oriented for cancellation.

The phosphorescent bars on the stamps were detected by the machine allowing it to properly cancel this letter: 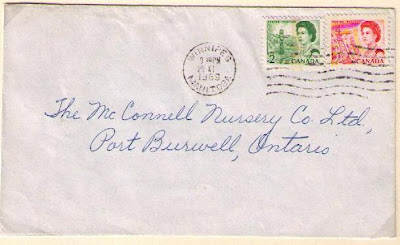 The Winnipeg machine sorted letters into two categories : local and out-of-town (forward) based on the phosphorescent bars on the postage stamps. The 4 cent stamp paying the local letter rate was coated with one bar (left or right side of the stamp), while the 5 cent stamp and other denominations were coated with two bars. The machine's sorting function of the machine ended on November 1, 1968 when the letter rate was eliminated. There was no further need to coat the 4 cent denomination differently.

The single bar on the single 4 cent stamp below indicated that it was a local letter: 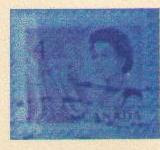 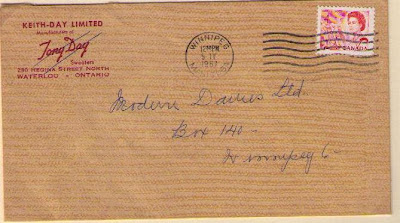 The two bars on the 5 cent stamp are seen under UV radiation. 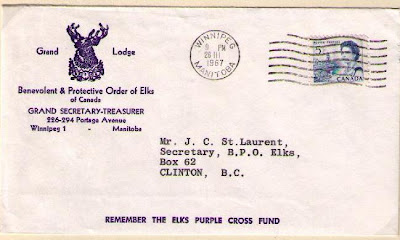 Forward letter to Clinton, B.C., March 28, 1967
2-Bar tagging
The scanner detected two bars and the letter was sent to the forward stream.

In the late 1960s, a second type of facer canceller was installed in Winnipeg and other Canadian post offices. Manufactured by the Pitney-Bowes Corporation, the MK-II facer-canceller worked on a reflected light principle. A light beam reflected from the moving letter into the machine's electric eye sensors activated the mechanism. The 6 cent stamp's colour was changed from its original orange to black to permit easier detection of the stamp's location on the envelope by facer canceller machines.

"Mr. M. Gardiner, who is engineer in charge of the electronic equipment in Winnipeg was most helpful in answering questions...he advised that Sefacan still has a big advantage over the new Pitney-Bowes Facer-Canceller (12% rejection as compared to nearly 30 %)...

The Winnipeg trials however did not lead to national implementation of Sefacan machine facing and cancelling. Instead, a new type of machine was installed and tested at the Ottawa post office in 1972.

The Ottawa trials were a success and lead to the automated system still in use in 2010. 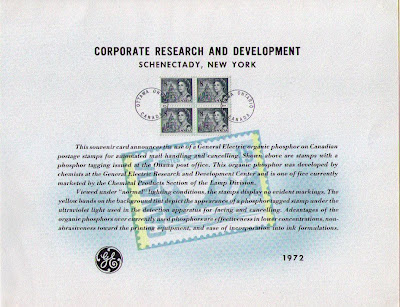 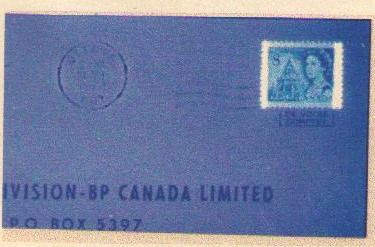 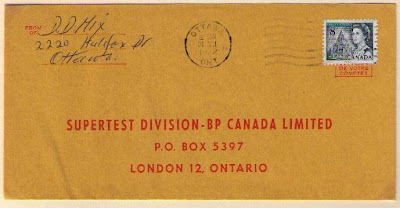 
b) Postal Code and Sorting

Canadians were assigned postal codes beginning in Ottawa in April 1971 and were instructed to include the addressee's postal code on the letter. Machines were developed that were able to scan and read postal codes on mail and mechanically sort the letters. The first generation of coding machines made by Bell Telephone, Belgium were not able to read printed or handwritten postal codes. Postal employees working at one of 24 keyboard consoles read the code on the envelope and typed the code on the envelope. The code was then be printed on the letter as yellow fluorescent bars which could be read by the machine and sorted.

First Day of Coding and Sorting

The Mechanized Letter Sorting system began handling live mail on August 22, 1972. The souvenir cover below with enclosed letter was sent to the Administrator General of Posts, Belgium, c/o an Ottawa address, K1H 6V5 : 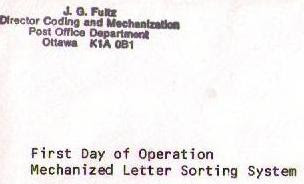 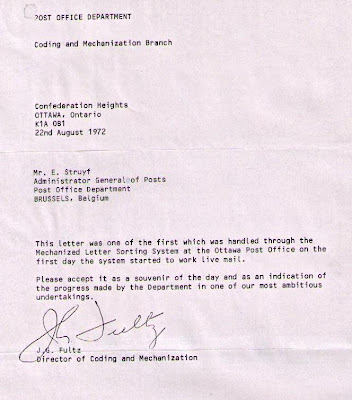 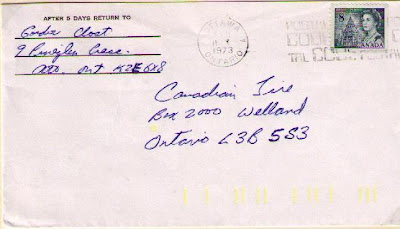 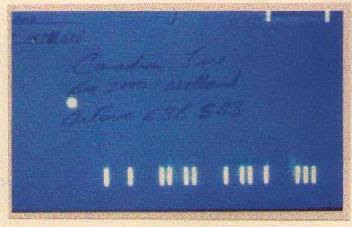 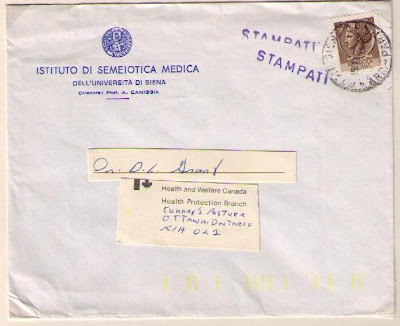 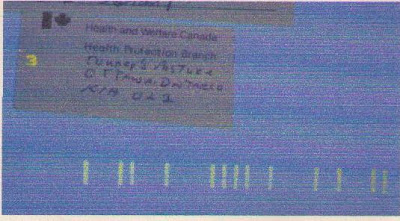 Operator of console 3 keyed in the fluorescent bars 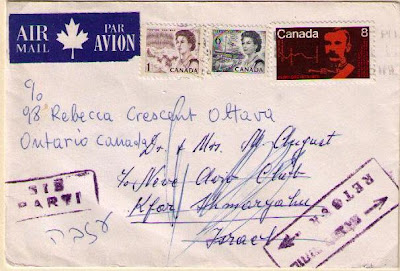 OP2 tagging on the stamps 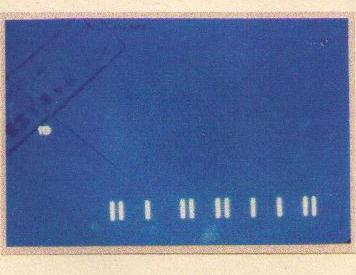 The Ottawa trials were successful and beginning in 1974, the automated machines were installed across the country. On February 1, 1974, Winnipeg became the second post office to implement fluorescent detection of stamps and the use of coding machines.