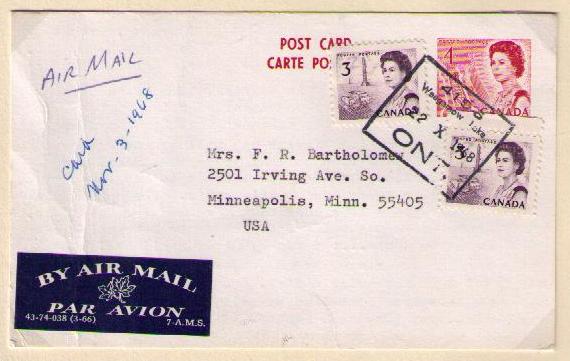 The card shown above was mailed from Weagamow Lake, Ontario, on October 22, 1968, and addressed to Minneapolis. The 4 cent regular stationery post card was uprated to pay the 10 cent air mail rate to the United States and was cancelled with the Weagamow Lake Money Order Office Number handstamp. Although it doesn't appear to be remarkable on its face, it is a postal history gem.

The Weagamow Lake post office (opened in 1961 as Round Lake and changed to Weagamow Lake in 1968) serves the North Caribou Lake First Nation (also known as Weagamow or Round Lake) which is located on the north shore of Weagamow Lake. It is 320 km north of Sioux Lookout, Ontario, and access to the community is by air or winter road. A gravel airstrip provides air service year round, and a winter road provides seasonal access for about two months of the year. In 1968, however, there wasn't an airstrip, so air service was provided by bush planes equipped with skis to land on the frozen lake or with floats for water landing.

All of the above makes this an interesting item but what elevates it to gem status is the correspondence which artfully describes how the writer is adapting to life in an isolated northern Ontario community. Of special significance are the references to the change in the post office name as well as the difficulty with mail delivery in the late fall: 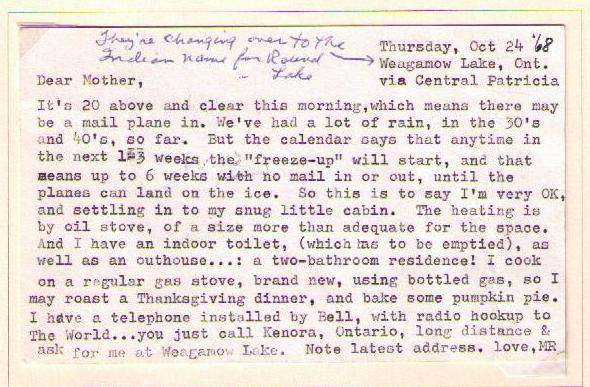 Thursday , October 24 '68 Weagamow Lake, Ont.via Central Patricia
[They're changing over to the Indian name for Round Lake]

Dear Mother, It's 20 above and clear this morning, which means there may be a mail plane in. We've had a lot of rain, in the30's and 40s so far. But the calendar says that anytime in the next 1-3 weeks the "freeze-up" will start, and that means up to 6 weeks with no mail in or out, until the planes can land on the ice. So this is to say that I am very OK, and settling into my snug little cabin. The heating is by oil stove, of a size more than adequate for this space. And I have an indoor toilet, (which has to be emptied), as well as an outhouse...a two bathroom residence! I cook on a regular gas stove, brand new using bottled gas, so I may roast a Thanksgiving dinner, and bake some pumpkin pie. I have a telephone installed by Bell, with radio hookup to the World...you just call Kenora long distance & ask for me at Weagamow Lake. Note latest address. love MR

What a delightful message.
Posted by philcovex at 5:28 PM