Grise Fiord is the northernmost civilian community of Canada, located in the High Arctic on Ellesmere Island. 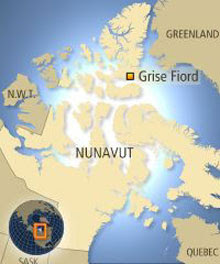 In the early 1950s, the Canadian federal government relocated Inuit from northern Quebec to settle at Grise Fiord. Eight Inuit families were moved after being promised homes and game to hunt, but the relocated people discovered no buildings and very little familiar wildlife.They were told that they would be returned home after a year if they wished, but this offer was later withdrawn as it would damage Canada's claims to sovereignty in the area and the Inuit were forced to stay.

In 1993, the Canadian government held hearings to investigate the relocation program. The Royal Commission on Aboriginal Peoples issued a report entitled The High Arctic Relocation: A Report on the 1953-55 Relocation, recommending a settlement.The government paid $10 million to the survivors and their families, but did not apologize until August 18, 2010. Indian Affairs and Northern Development Minister John Duncan apologized on behalf of all Canadians for the “hardship, suffering and loss they experienced as a result of the relocation.” “We deeply regret the mistakes and broken promises of this dark chapter of our history.

The card below was sent by a film maker who was encouraged by the RCMP Commissioner to come up to Ellesmere Island. I've transcribed his message below. 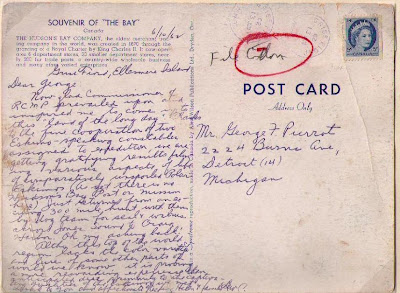 Now glad Commissioner of RCMP prevailed upon and inspired me to come up to this "land of the long day". Thanks to the fine cooperation of two Eskimo-speaking constables assigned to expedition, we are getting gratifying results filming various aspects of life of comparatively unspoiled Polar Eskimos (As yet there is no Hudson's Bay Post or Mission here). Just returned from an exciting 300 mile hunt with them by dog team for seal and walrus across Jones Sound to Craig Harbor. Oh, my aching back.

Altho this top of the world region lacks the color varieties and lure of some other parts of world we know it is proving a most rewarding experience than anticipated due primarily to the captivating qualities of the Eskimos we meet...
Posted by philcovex at 12:54 PM