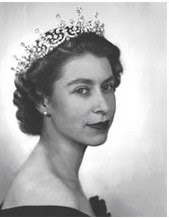 On April 1, 1954 the Canadian post office issued a 5 cent definitive stamp to begin the process of replacing the unsuccessful Karsh issue. The remaining denominations, 1-4 cents and 6 cents, were released on June 10, 1954. A photograph of Queen Elizabeth taken by court photographer Dorothy Wilding was the model for the engraved image of Her Majesty on the second set of definitives which have become know as the "Wilding" issue.The Wilding issue was in use for almost nine years, a much longer life span than the Karsh series.

The Wilding period starts on April 1, 1954 and extends at least to the release of the last of the Cameo stamps which replaced the Wildings on May 2, 1963. It may be that I will go beyond that date but I will usually have a good reason for doing so.

The first article looks at the domestic forward letter rate. There weren't many rate changes during the Wilding period and the forward letter rate was no exception. The 5 cent forward (out-of-town) letter rate for the first two ounces was introduced on April 1, 1954. The rate remained in effect until October 31, 1968, a fourteen year period of rate stability. 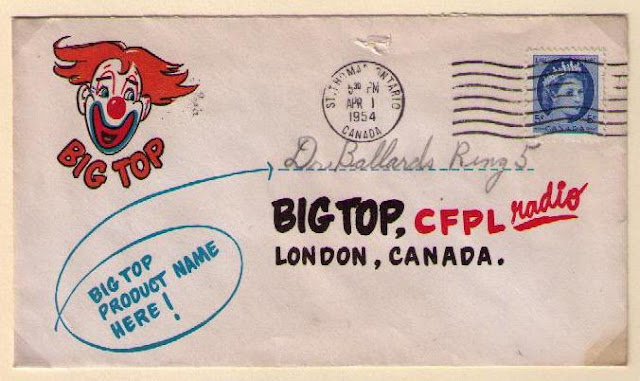 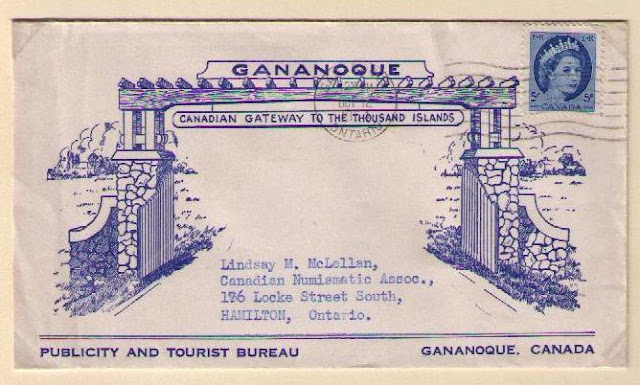 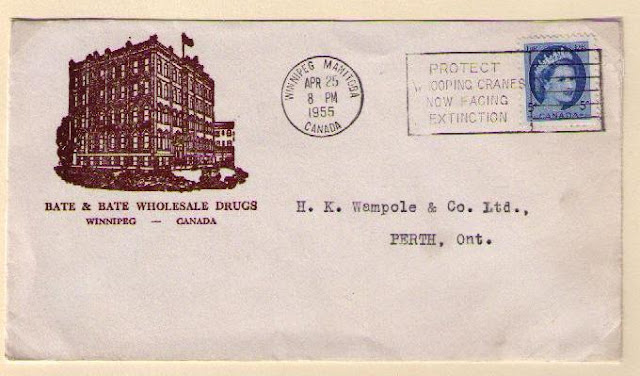 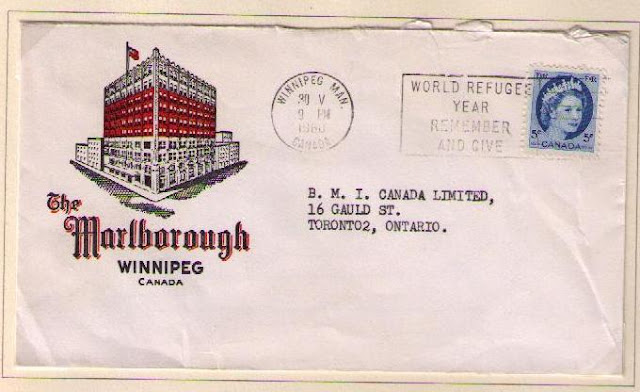 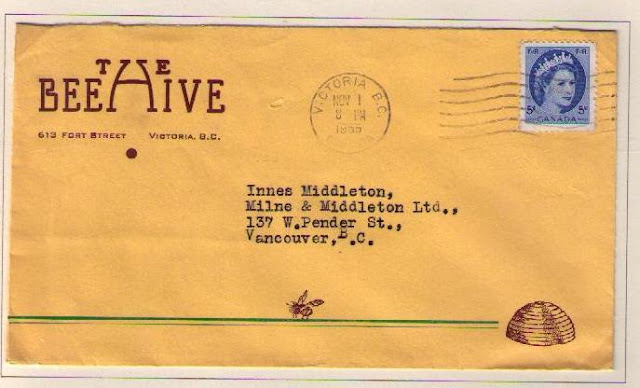 a) Province of Saskatchewan 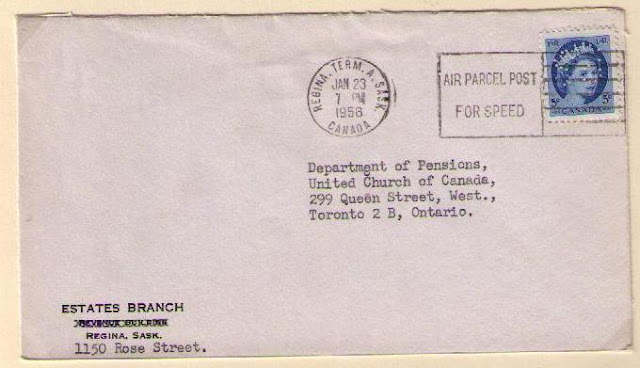 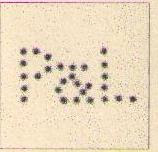 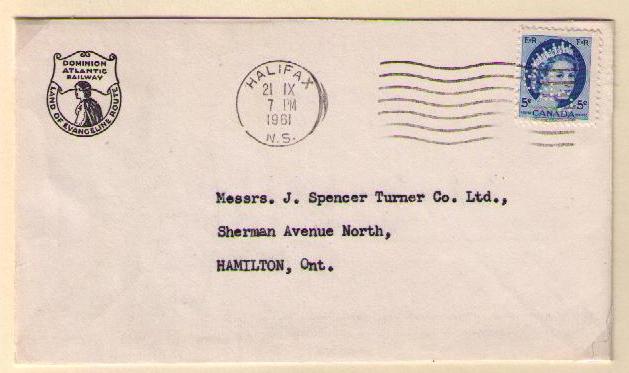 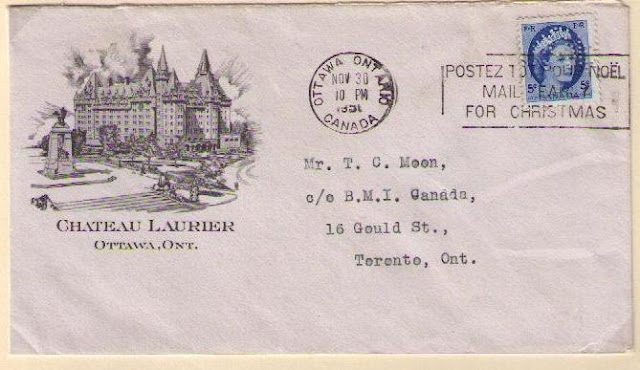 Federal departments and agencies were supplied with definitive stamps overprinted with the letter "G" (government/gouvernement).

The 5 cent Wilding official stamp was issued on January 11, 1955. Until then, the 5 cent Karsh official was "in period" 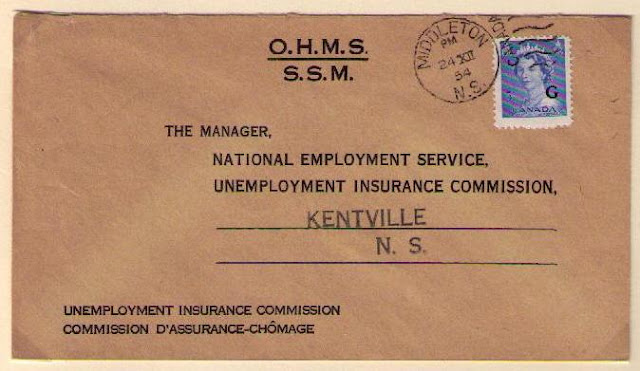 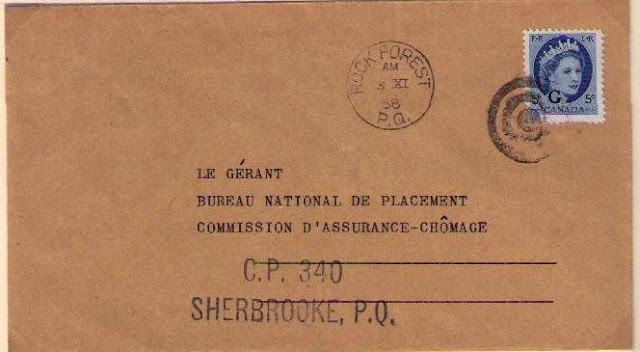 Rock Forest, Que., to Sherbrooke, November 8 1958
A late use of a "bullseye" cancellation

The forward letter rate was 5 cents for the first ounce and 3 cents for each additional ounce. 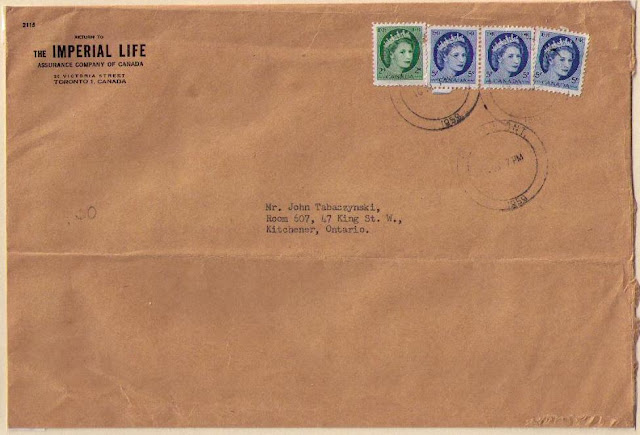 Shortpaid forward letter mail was taxed at double the deficiency. 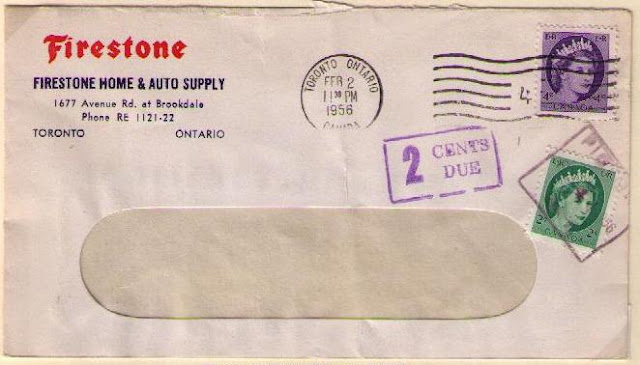 Toronto to Picton, February 2, 1956
2 cents due paid with a 2 cent Wilding definitive cancelled at Picton February 4, 1956 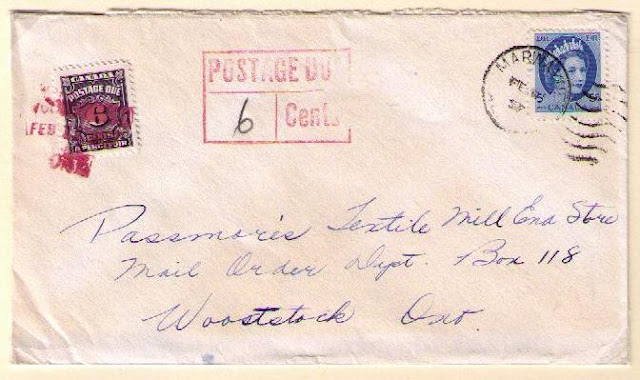 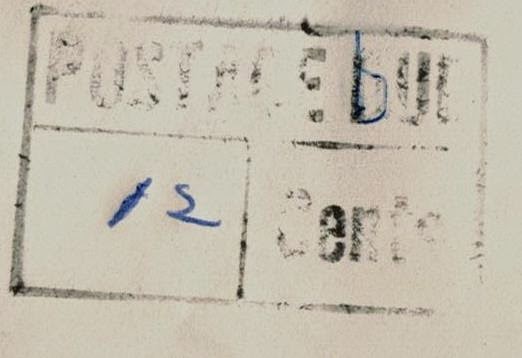 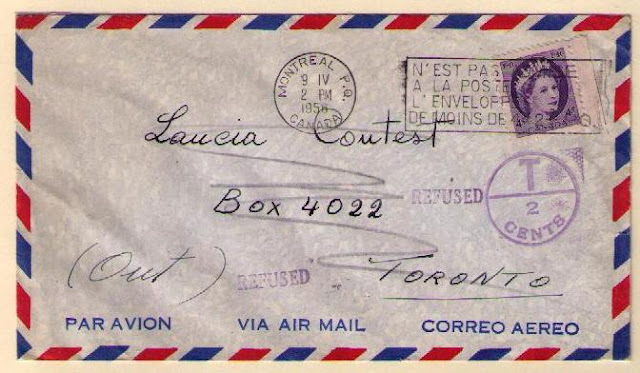 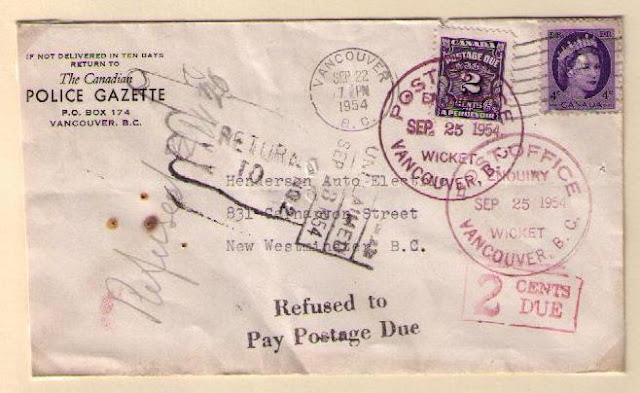 Vancouver to New Westminster, September 22 1954
Shortpaid 1 cent and taxed 2 cents
The addressee refused to pay the postage due. The letter was returned to sender who paid amount due.

On April 1 , 1954, All-Up service was change such that all domestic mail not exceeding 8 ounces in weight was carried by air service provided air transmission expedited delivery. Domestic mail exceeding 8 ounces was sent by surface mail unless air service was requested. The rate was 7 cents for the first ounce and 5 cents for each additional ounce.

Simply stated, as of April 1, 1954 there was no air mail domestic letter rate for letters up to 8 ounces. 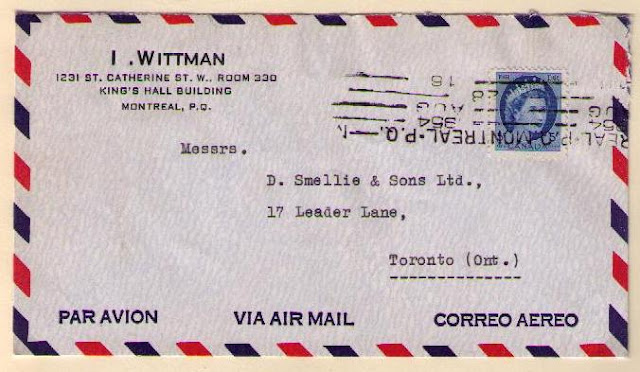 Montreal to Toronto, August 28 1954
Letter mailed in an air mail envelope prepaid at the 5 cent surface letter rate
The air mail rate only started at 8 ounces.

Compare the above cover with this one that was posted before April 1, 1954: 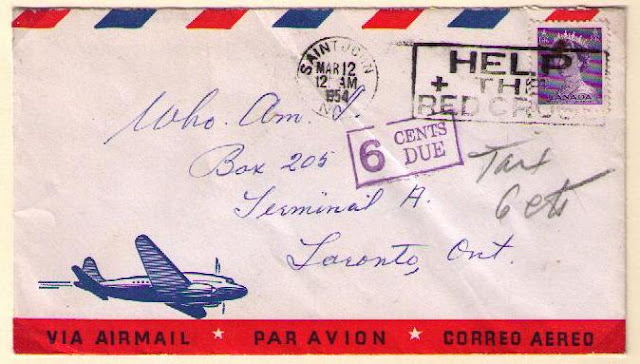 Air mail service was requested for this cover mailed from St. John, N.B., to Toronto on March 12, 1954. Air mail letter rates were in effect at 7 cents for the first ounce and 5 cents for each subsequent ounce if requested. In this case the request resulted in a tax of 6 cents.

What if the sender had just mailed the letter in a plain envelope? Under the All-Up scheme the cover would have been sent by air mail if it were available and without taxation.

Railway Post Offices on trains such as those from Northern Ontario to Toronto had letter boxes within which mail could be deposited. A letter could be mailed directly at the train station rather than at the post office to expedite its conveyance. No extra fee was charged for this service. The letters were cancelled on arrival in Toronto receiving the "THIS MAIL WAS CARRIED BY TRAVELLING LETTER BOX TO TORONTO": 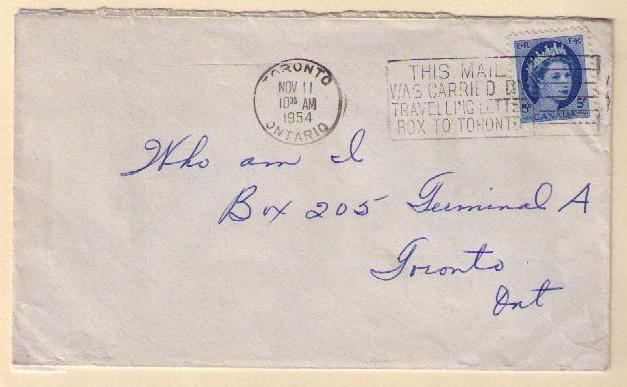 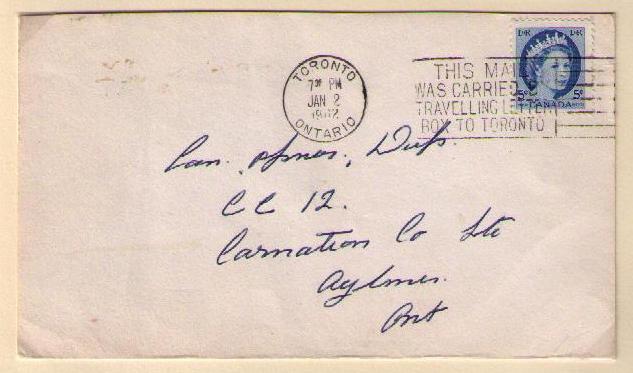 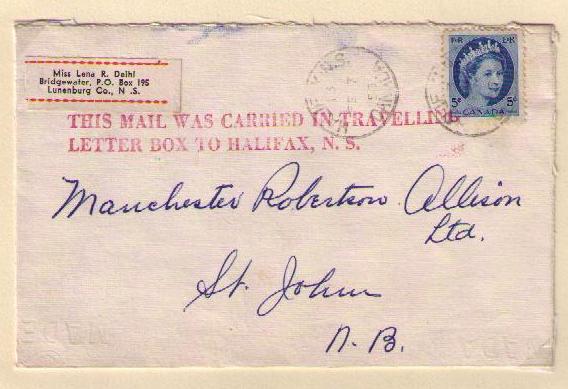 Bridgewater to St. John, N.B.
Travelling Letter Box handstamp was applied
The letter was cancelled at Halifax on February 7, 1955 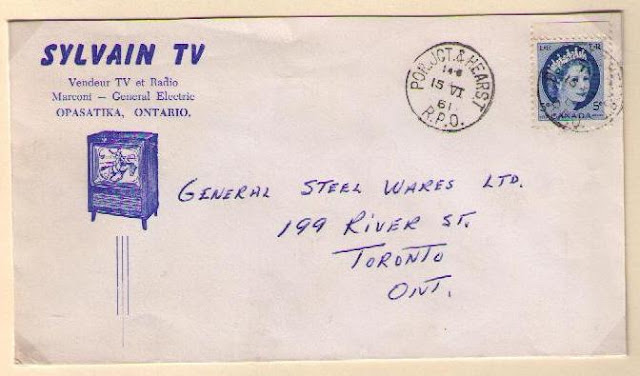 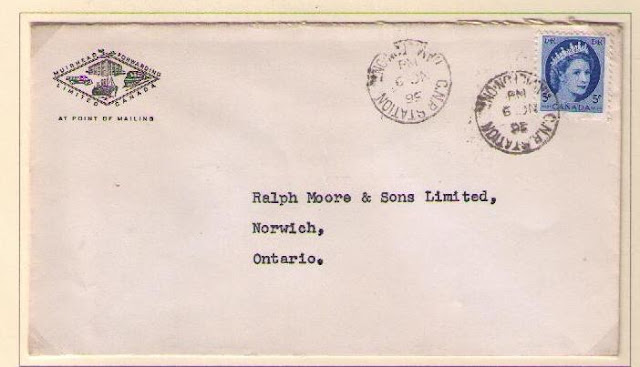 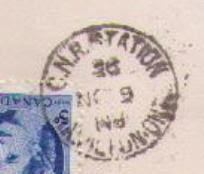 Undeliverable mail with a return address was returned to the sender without charge. 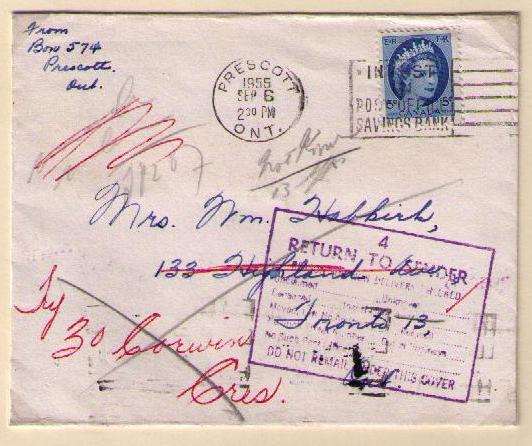 Prescott to Toronto, September 6, 1955
Several attempts made to locate address but without success
Toronto machine cancellation on the back of the envelope. October 6,1955:

b) No Return Address

Mail without a return address was diverted to the Undeliverable Mail Office . Letters returned to sender were charged 5 cents. 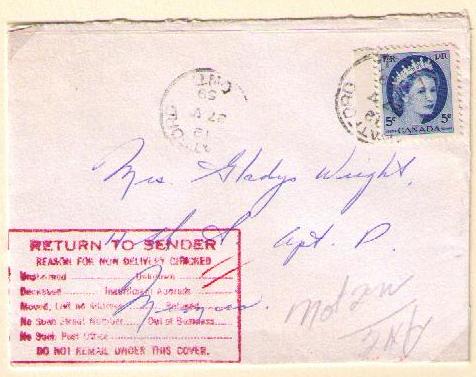 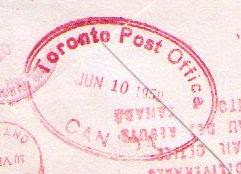 The letter would have been returned to the sender in an ambulance envelope with a five cent charge. 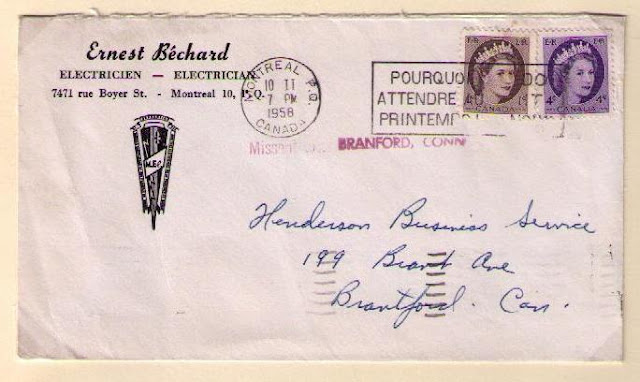 Posted by philcovex at 4:08 PM