Countries with surcharged air mail systems, such as France and Italy, required the sender to pay the surface letter rate and an air mail supplement. Canada was among countries that had inclusive air mail rates, i.e. a single-component rate. The Canada Post Office's approach to the UPU rule was to require at least 75% of the inclusive rate to be prepaid for air mail service.

This article shows four examples of mail that were denied air mail transmission because they were underpaid and one example of underpaid mail that was allowed air conveyance. 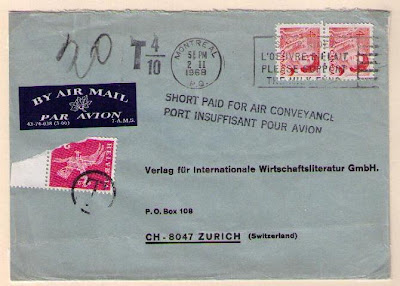 Air mail service was requested for this letter sent from Montreal to Zurich, February 2, 1968. The air mail letter rate to Europe was 15 cents. Only prepaid 8 cents, this letter was 7 cents underpaid for air mail transmission(53% of the inclusive air mail rate), and therefore sent as surface mail. However, the surface letter rate was 10 cents, so this letter was 2c shortpaid and taxed accordingly.

Calculation for this charge: 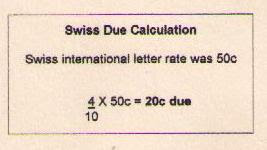 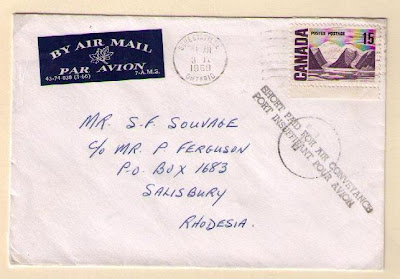 The above letter was posted from Streetsville to Salisbury on February 3, 1969, prepaid 15 cents. The air mail rate to Rhodesia was 25 cents. Since less than 75% of the air mail rate was prepaid the letter was sent by surface mail. The surface letter rate was 12 cents. 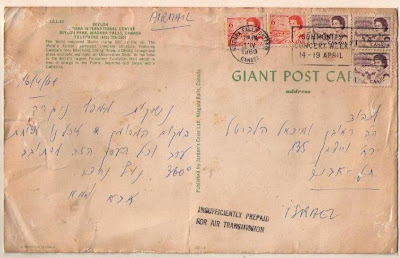 The instructional handstamp was in English only: 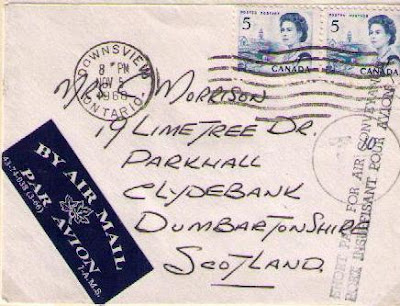 B. Underpaid Air Mail Given Conveyance

"Other Articles" Air Mail to Uganda 1969

The "Other Articles" air mail rate to Uganda was 20 cents for each ounce. 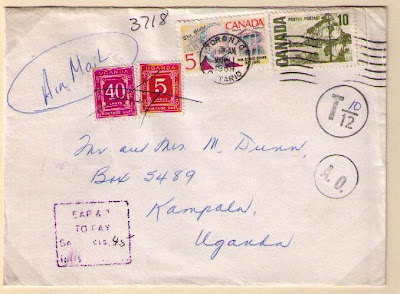 This "Other Articles" air mail cover from Toronto to Kampala, March 11, 1969, was prepaid 15 cents, 75% of the air mail rate. The Canada Post Office provided air mail service and correctly taxed the item 10 cents (double the deficiency).
Posted by philcovex at 6:14 PM