Undeliverable mail was mail that could not be delivered for such reasons as:

The reason for the non-delivery was to be stamped or written on the address side. This commonly used handstamp provided various reasons for non-delivery: 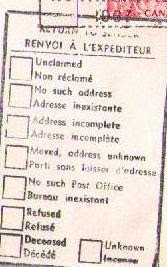 There were two categories of returned mail:

a) Return address on the outside of the mail

Undeliverable domestic first class mail was returned to the sender without charge if the return address was on the outside of the mail. 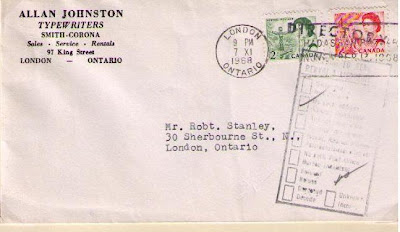 "DIRECTORY" handstamp indicates that a reference such as a telephone directory was used to locate the addressee.

The local Montreal letter mailed June 14, 1967, was returned because the addressee had moved, presumably without leaving a forwarding address. 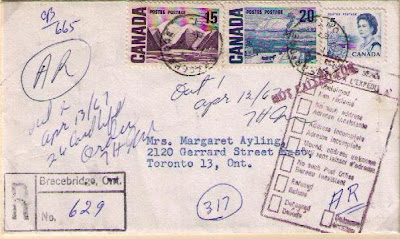 Two attempts were made by the Toronto Post Office to deliver this registered letter mailed from from Bracebridge, March 1967. The addressee received a Notice of Delivery card advising her that the registered mail would be returned if not delivered within a specified time. Since she did not pick up the item the "NOT CALLED FOR" handstamp was applied and the letter was returned to the sender. 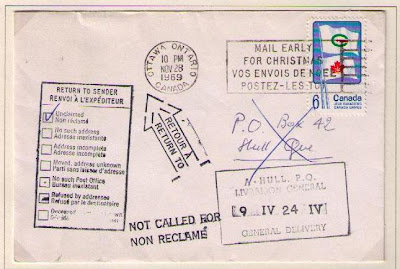 Ottawa to a Post Office Box, Hull, November 28, 1969
The letter remained unclaimed until April, 1970 and was eventually returned. 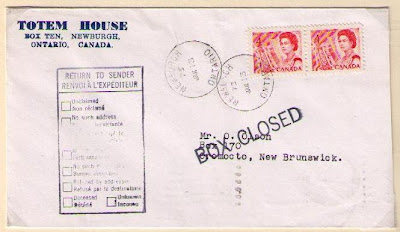 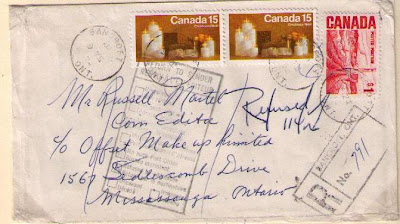 Bancroft to Mississauga, December 9 1972
The letter was refused by the addressee


b) Return address on the inside only

If the return address was on the inside of the mail only, the mail was sent to an Undeliverable Mail Office to be opened and returned to the sender for a fee. 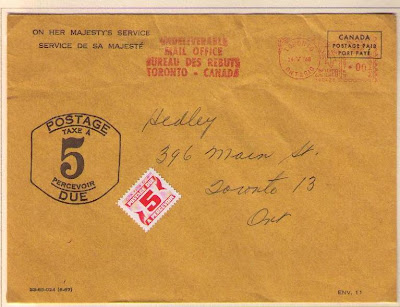 Items returned to sender from the Undeliverable Mail Office (UMO) was sent in an ambulance envelope. This example sent from the Toronto UMO to Toronto on May 14, 1968 was from Printing Order 33-65-024 (6-67).

The 5 cent fee was paid and a 5 cent postage due stamp was affixed to the envelope. 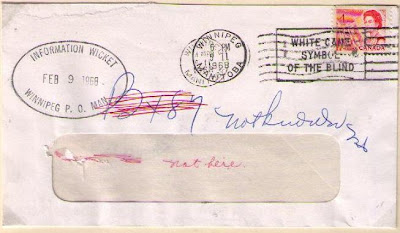 The Winnipeg local letter mailed February 5, 1968 was redirected to Box 87, Winnipeg. The addressee was not known and the letter was undeliverable. Since there was no return address on the outside of the envelope, the letter was forwarded to the Vancouver UMO which dealt with western undeliverable mail.

Vancouver UMO meter applied to the back of the envelope

The letter would have been mailed to the sender in an ambulance envelope and a 5 cent fee collected.


This insert was included with the undeliverable mail returned by the UMO to the sender: 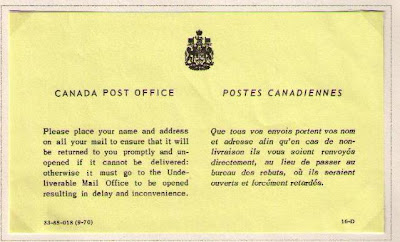 T10 handstamp suggests that there were two undeliverable mail items and that the 20 cents in postage dues represented payment for both items.
Posted by philcovex at 2:10 PM