a) At Time of Despatch of Registered Article

The sender of a registered article addressed to any other country could obtain an acknowledgment of its receipt by an addressee for a fee in addition to the ordinary postage and registration fee. In calculating the postage rate on a registered article in respect of which an advice of delivery was requested, the weight of the "A.R." card was not to be taken into consideration.

If the sender requested that an A.R. card be returned by air mail , the air mail rate applicable to the country of destination was to be prepaid and postage affixed to the card. This was in addition to the normal AR fee. The card was to be endorsed "Renvoi par avion"(Return by Air).

The indication "A.R." (signifying Acknowledgment of Receipt) was to be marked on the address side of the registered article.

b) Subsequent to Despatch of Registered Article 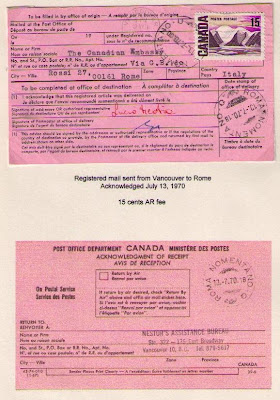 AR cards were taped or stapled to the back of the envelope. An AR handstamp was applied to alert the receiving office that a card was affixed.

Montreal to Vienna, Austria, April 10, 1973
15 cents air mail letter rate + 50 cents registration fee
AR handstamp to indicate that the AR card was stapled to the back of the envelope

On June 2, 1972 an article of mail addressed to Hamburg, Germany was registered at the Weston, Ontario, post office, and was given registration number 383. Acknowledgment of Receipt was requested and an AR card was prepared. The "Return by air" box was checked and an Air Mail sticker attached to the card. The total fee was 25 cents : 15 cents AR + 10 cents Air Mail post card rate.

The 25 cent stamp was attached to the AR card and received the Weston circular date stamp dated June 2. 1972. A receipt for this transaction was provided and shown below, along with the front and back of the AR card: 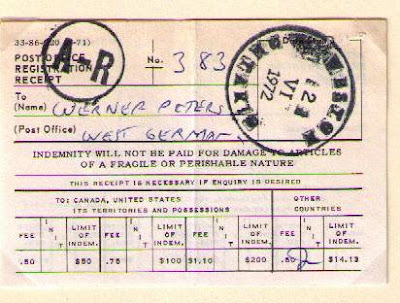 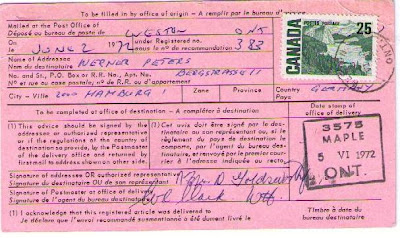 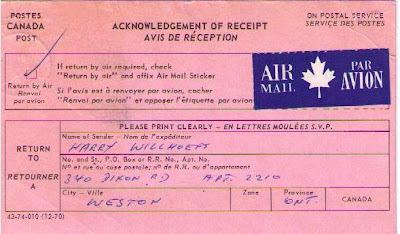 Return side of AR card
"Return by Air" box checked off


The card was returned to the sender but the receiving office was not Hamburg, Germany but Maple, Ontario, dated June 5, 1972 : 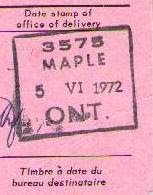 It is interesting to note that neither the person who signed as addressee nor the Maple post office noticed that they were acknowledging receipt of the wrong registered article.