Canadian Military Supervision in Vietnam During the Centennial Period

From 1954 to 1973 Canada served on two international truce commissions in Vietnam:

The two commissions are described in this article and correspondence is shown.

1. International Commission for Supervision and Control in Vietnam (ICSC)

The ICSC was an international body established in 1954 that oversaw the implementation of the Geneva Accords that ended the First Indochina War with the partition of Vietnam. The mandate of the ICSC in Vietnam was to supervise the cease-fires and withdrawal of French troops and to supervise the movement of refugees. Much of the work was done from 1954 to 1955 and Canada had only token representation after 1958. The force comprised troops and officers from Canada, Poland, and India representing the non-communist, communist, and non-aligned blocs respectively. In 1973, the ICSC was replaced by a new body, the International Commission of Control and Supervision.

Postal Services for the ICSC was provided byIndia through its APO No. 56(Army Post Office) , New Delhi. This air mail letter was mailed from Calgary, June 23, 1969 to a Canadian Commision member, c/o APO No. 56, New Delhi, India. The Indian APO forwarded the letter to the "Ministry of External Affairs", New Delhi, and the letter was most likely conveyed to Vietnam by Indian diplomatic pouch.

The ICCS was established to monitor the cease-fire in South Vietnam as agreed to at the Paris Peace Conference. The commission consisted personnel from Canada, Hungary, Indonesia and Poland. The Commission arranged the release and exchange of prisoners of war. Canada contributed 240 Canadian Forces personnel and 50 officials from the Department of External Affairs between January 28, 1973 and 31 July 31, 1973. Canada was replaced by Iran. The ICCS operated until 30 April 1975, two years after the Canadians withdrew.

This air letter below was sent on April 1, 1973 from My Tho, Vietnam by Canadian delegate Col. R.B. Scranton. Col. Scranton describes the difficulty he faces as an ICCS delegate. He writes: "...There is no cease fire here and there seems to be no indication that either side has much intent to try and have one." 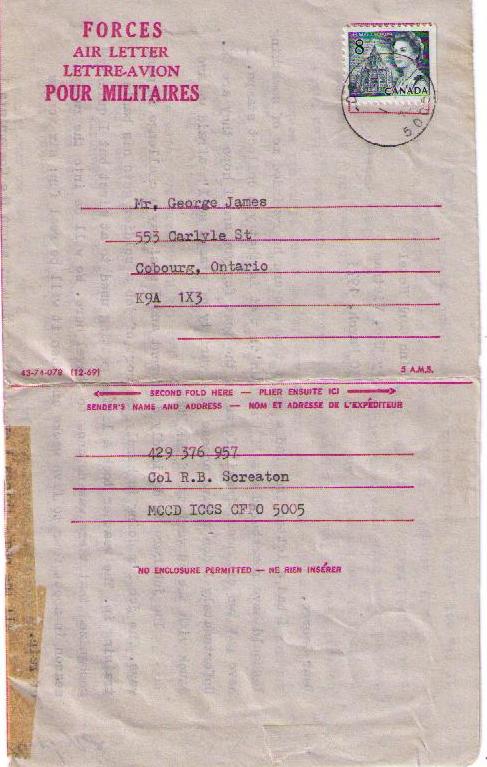