This article deals with three postage due covers from foreign destinations that were correctly taxed by the Canadian Post Office. It is assumed that the reader is familiar with the Vienna system of taxation (See "Unpaid and Underpaid International Correspondence: Canada Post Office's Incorrect and Corrected Methods of Taxation 1966" posted on this blog on June 14, 2010, and "Centennial Period International Mail Unpaid and Underpaid Surface and All-Up Letter Mail" posted on this blog on June 13, 2010. 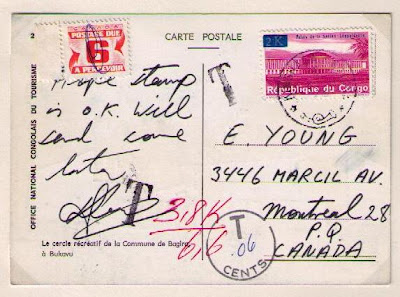 This underpaid surface post card from Kinshasa to Montreal franked with a 2k stamp, August 28 1968 was taxed 3.8/6.6 by the Congo post office.

(The reader may wish to work backwards using this tax fraction to determine the surface post card rate from Congo to Canada at the time of mailing. The Congo post office taxed this card properly The international letter rate from Congo was 6.6 makulas)

The fraction was interpreted as follows by the receiving Canadian post office:

The post office would likely not question whether the Congo fraction was correct or not. The Vienna system was designed to simplify taxation. Verification of an originating post offices tax fraction would slow the process down and might not even be calculable by the Canadian post office.

This is the simple calculation required to convert 3.8 makulas to cents (Canadian):

and the Canadian due handstamp:

The system is very simple to apply, but much more complicated to describe. 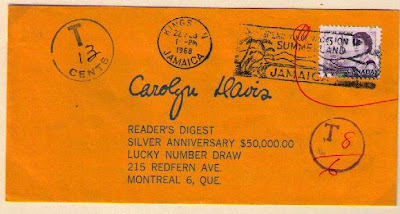 Reader's Digest provided stamped return envelopes for its 1968 Silver Anniversary Draw", paying the Canadian domestic printed matter rate. This sender mailed the return envelope from Kingston, Jamaica, on February 22, 1968. The Jamaican post office identified the stamp as being invalid by using the "o" marking and drawing a border around the invalid stamp: 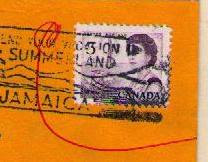 Another simple calculation demonstrating the efficiency of the Vienna system. 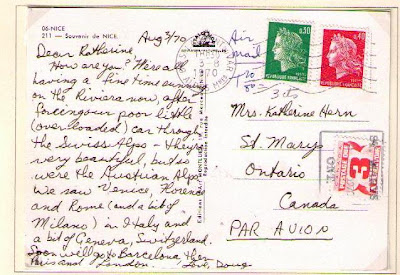 This underpaid air mail postcard was sent from Paris to St. Marys on August 3, 1970.

According to Article 59 of the 1969 Tokyo "Universal Postal Convention", air mail correspondence was to be forwarded if the amount of air surcharge was paid. Countries of origin could forward by air if the amount paid was at least 75 % of the air mail surcharge:

The air mail post card rate to Canada was 80 cents calculated as follows:

French Deficiency Calculation and Amount Due in centimes

The deficiency was 10 centimes :

The tax fraction was written in ink

The amount due in Canadian currency was 3 cents:


The amount due was paid and a 3 cent postage due stamp was affixed and cancelled St. Marys on August 6, 1970 :

That was a long one!