UPU regulations provided a set of rules that were to be followed throughout the international community. The rules dealing with unpaid and underpaid mail during the Centennial period were introduced at the Vienna Congress of 1964 and came into effect on January 1, 1966.

Pursuant to Article 29 of the "Rules Applicable in Common Throughout the International Postal Service, members were to handle unpaid and underpaid mail as follows:

...the charge is fixed at double the amount of the deficient postage, multiplied by the ratio between the charge adopted for letters at the first weight step by the Country of delivery and the corresponding charge adopted by the Country of origin, provided that the charge to be collected is not less than 10 centimes [gold].
The formula provided by Article 29 was clarified by Article 142 which provided instructions to the countries of origin and destination as to how underpaid items were to be marked and charged.
Article 142
Unpaid and Underpaid Mail

1. Items on which a charge is to be collected after posting, either from the addressee or, in the case of undeliverable items, from the sender, are marked with a T stamp (postage due) in the middle of the upper part of the front : beside the impression of this stamp the Administration of origin enters very legibly in the currency of its Country the double or single amount, as the case may be, of the underpayment, and under the fraction line, that of its charge valid for the first weight step letters.

3. The delivering Administration marks the item with the charge to be collected. It determines this charge by multiplying the fraction resulting from the data mentioned in paragraph 1 by the amount, in its national currency, of the charge in the international service to the first weight step for letters.
An Example of Taxation

The cover below from Toronto to Zurich, Switzerland, June 25, 1968, was underpaid. The UPU surface rate was 10 cents. The deficient postage was 4 cents. 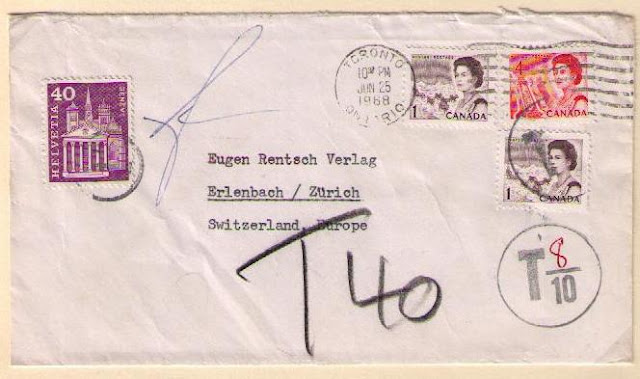 The Canadian Post Office, the originating country, taxed the correspondence.

This is the Canadian tax marking:

The tax marking is a fraction. The numerator is double the deficient postage, 8 (cents). The denominator is the Canadian international letter rate, 10 (cents).

The tax fraction was then used by the Swiss Post Office to calculate the amount to be charged, the Swiss equivalent of 8 cents. The 1964 Vienna rules made the calculation a simple matter without the necessity of using conversion tables.
Swiss Calculation

In this case, the letter was charged 40 centimes and the amount due paid with a 40 centimes stamp. 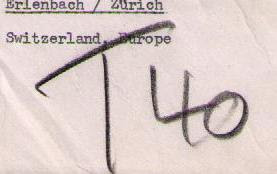 The international preferential surface letter rate was 5 cents for the first ounce. The 5 cents rate was introduced on April 1, 1954. 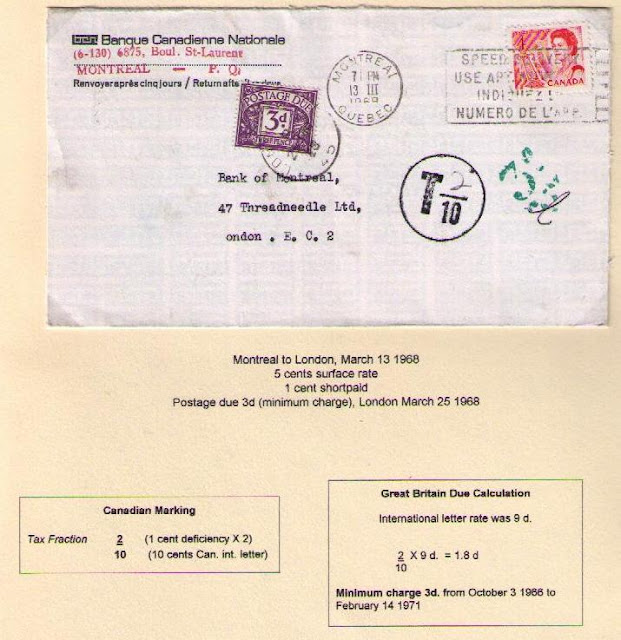 The UPU surface letter rate was 10 cents for the first ounce. The 10 cent rate came into effect on January 1, 1966. 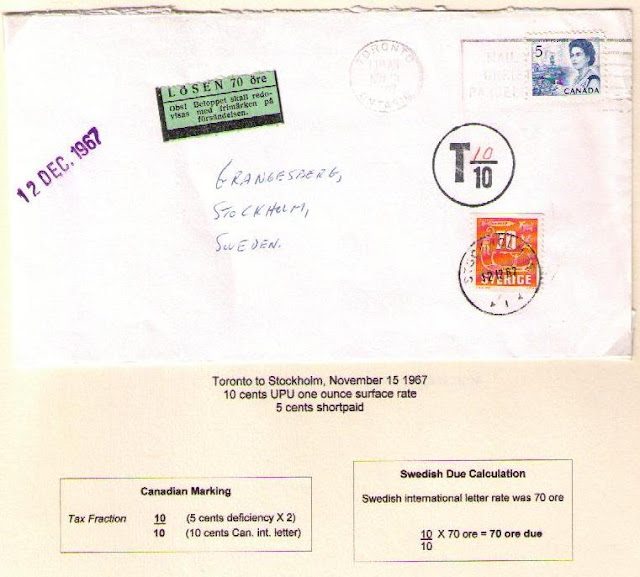 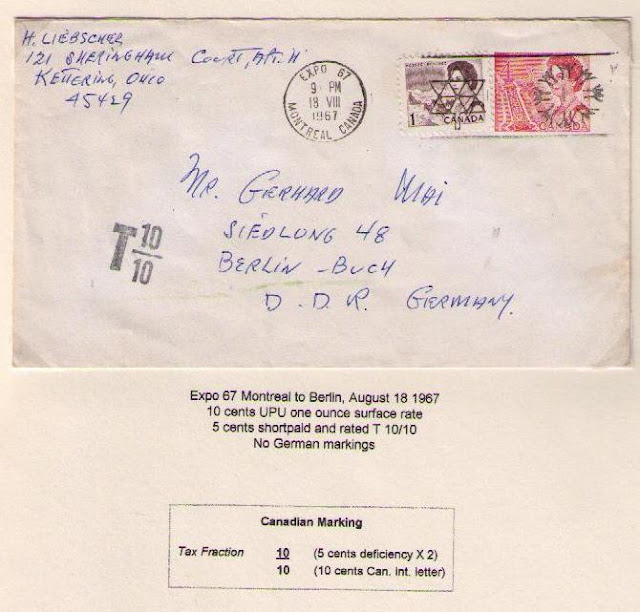 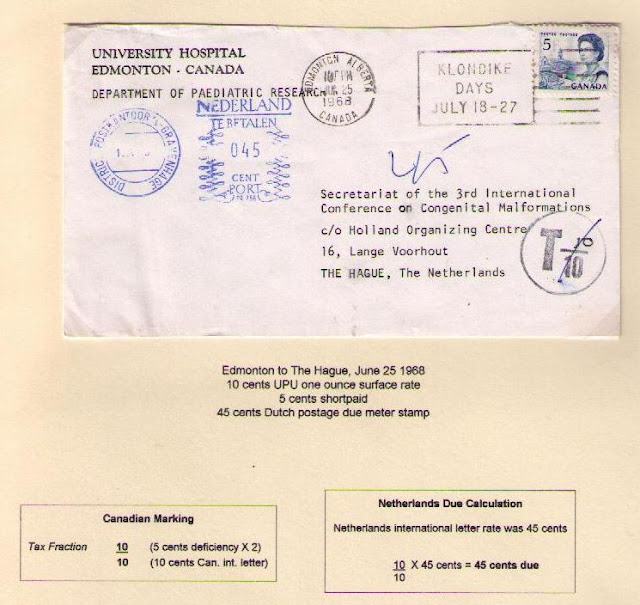 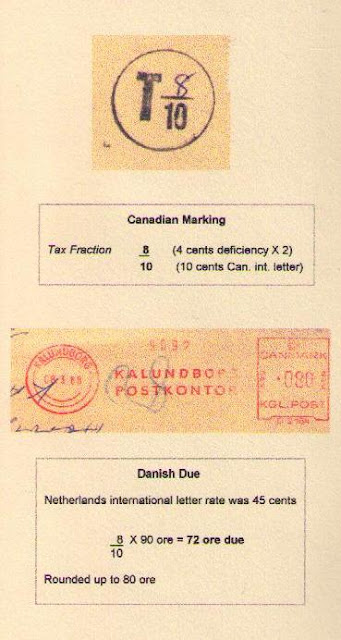 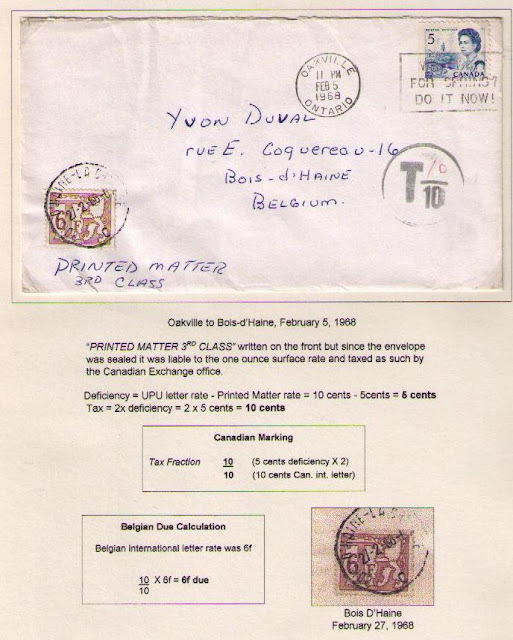 The international preferential surface letter rate was increased from 5 cents to 6 cents for the first ounce on November 1, 1968. 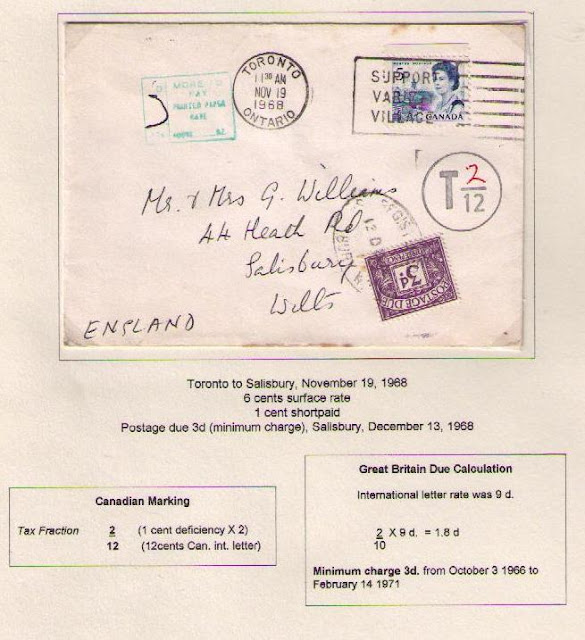 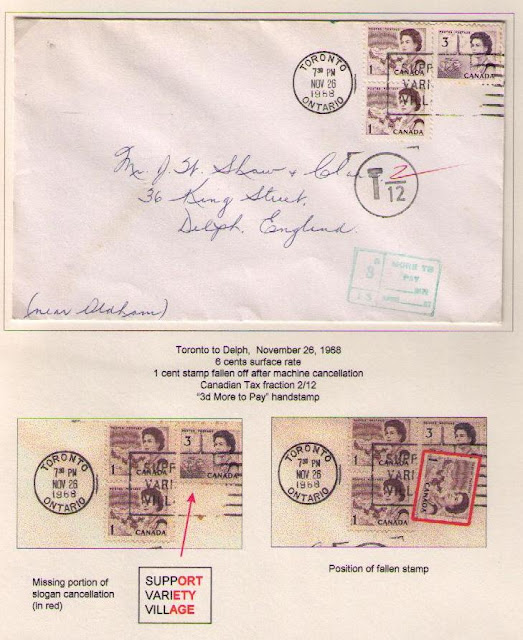 The UPU surface letter rate was increased from 10 cents to 12 cents for the first ounce on November 1, 1968. 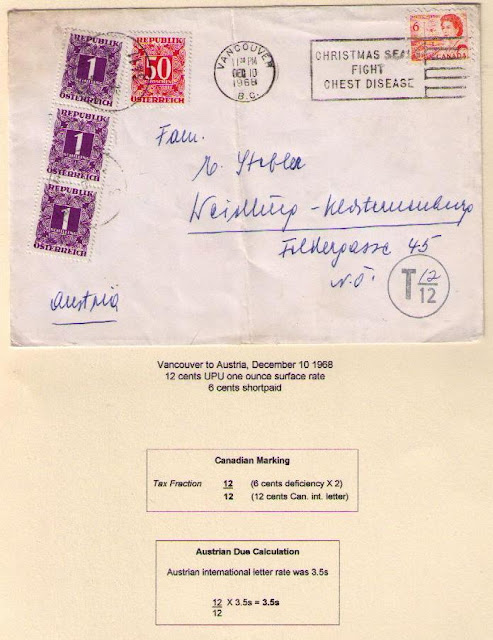 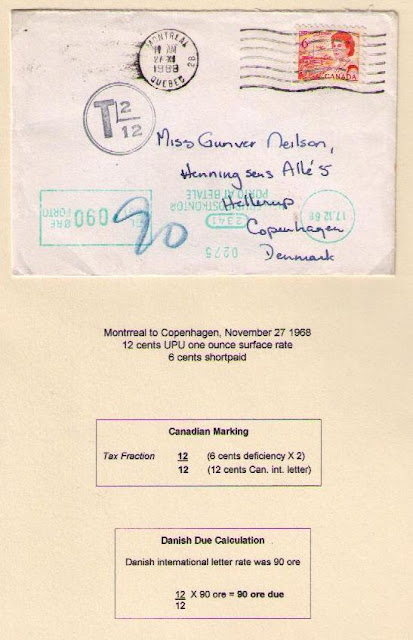 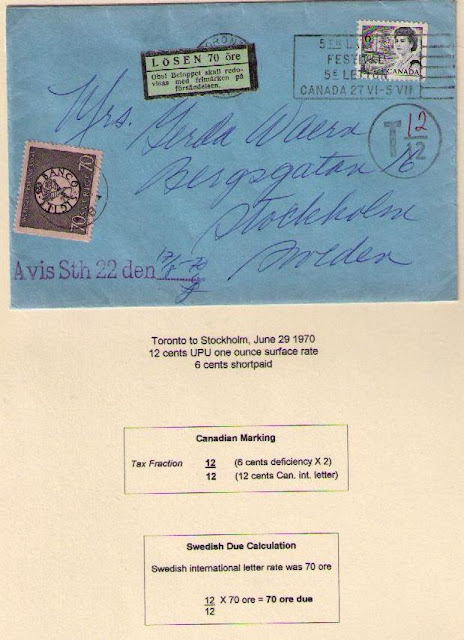 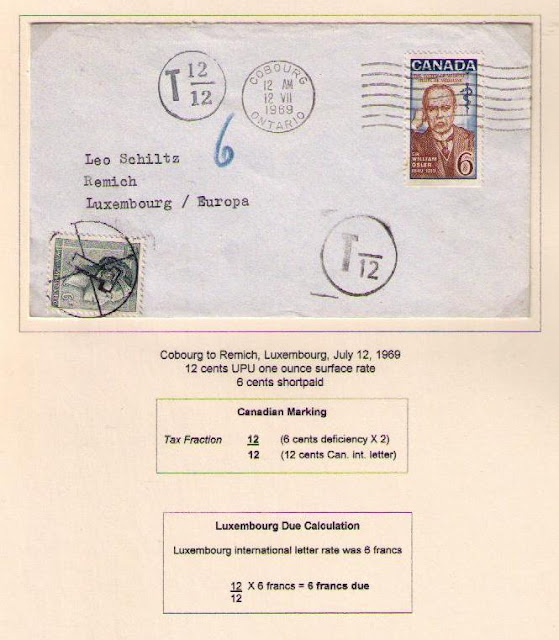 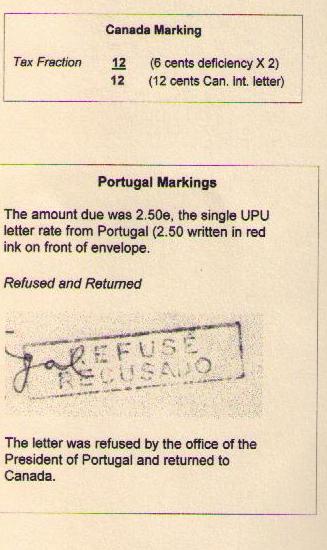 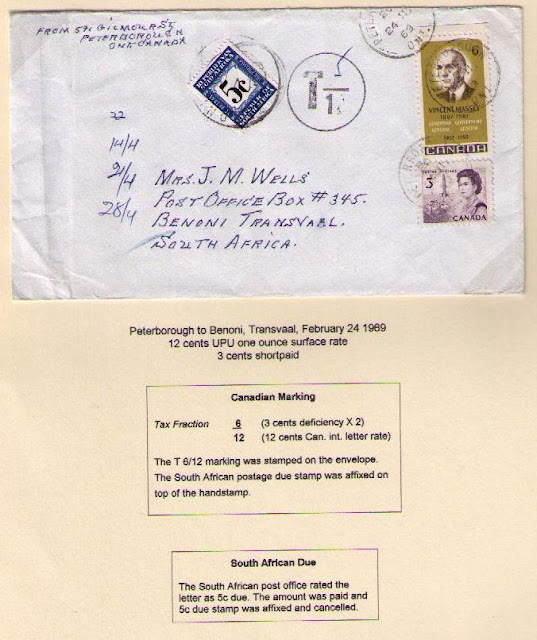 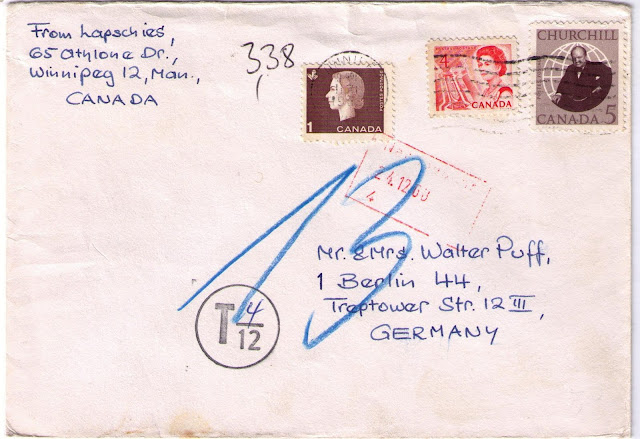 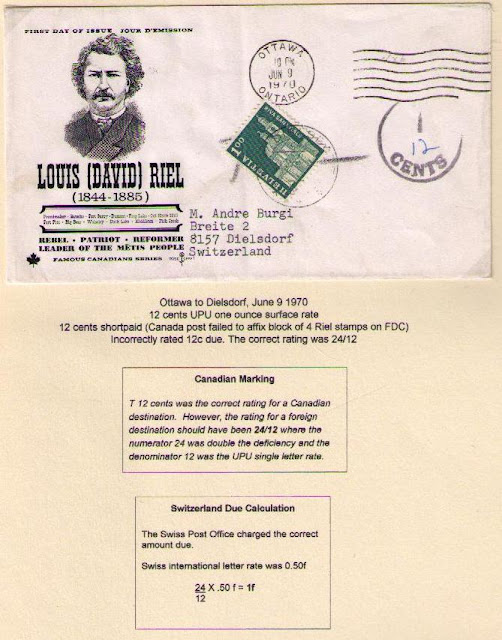 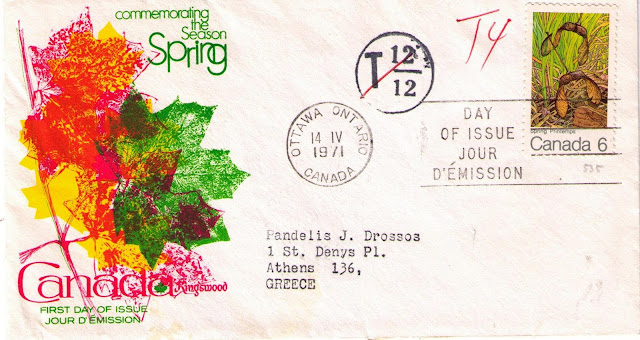 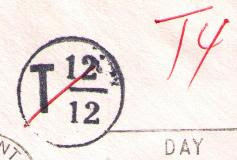 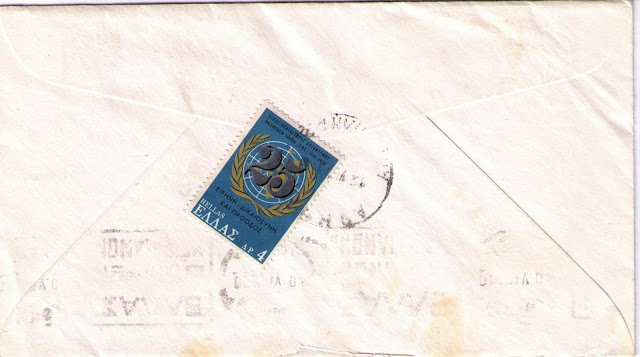 4 drachmas postage due paid with UN commemorative
Cancelled May 12, 1971 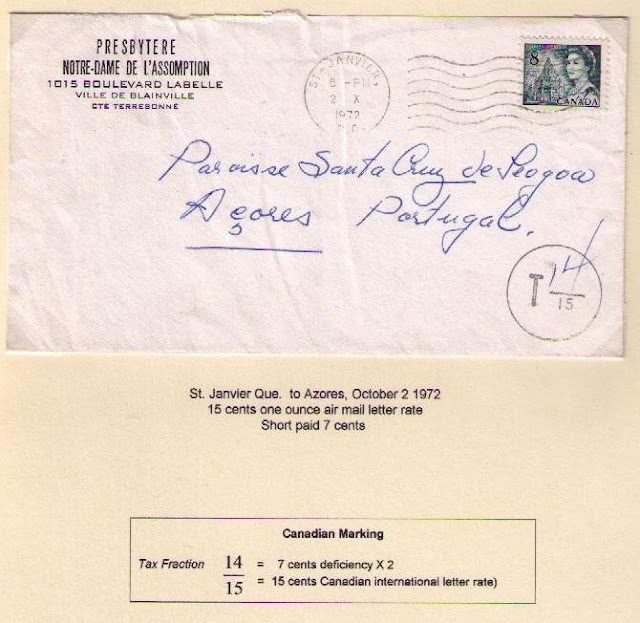 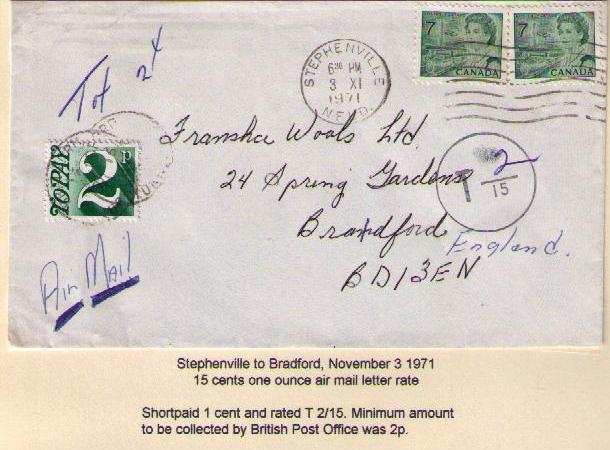 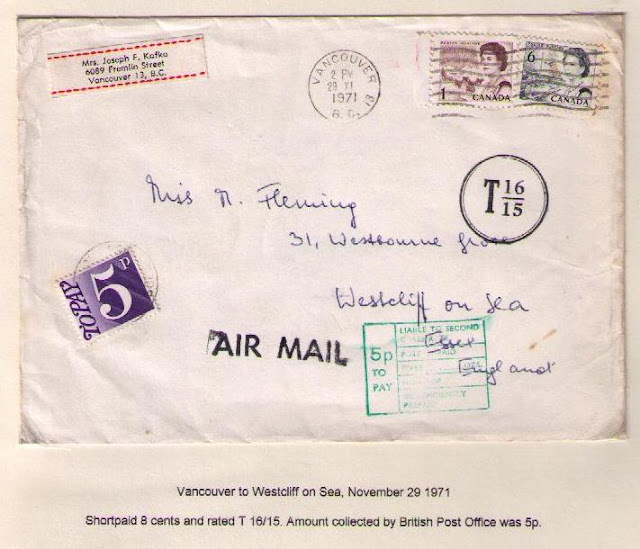 The Post Office would sometimes "advance" underpaid postage to avoid delay and postage due charges to the addressee. The item would be stamped "PORT PAYE" which indicated that postage for the correspondence had been paid. 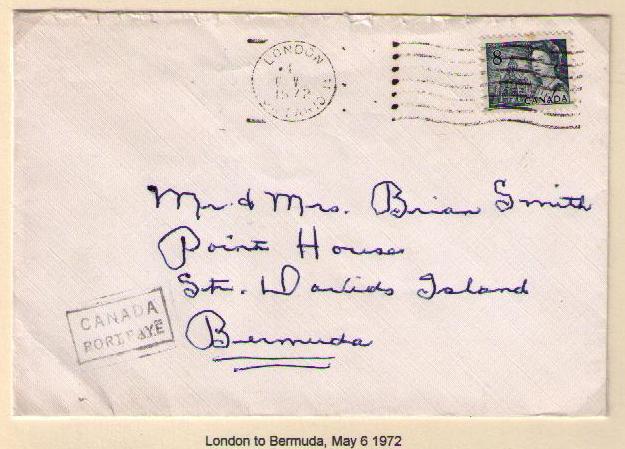 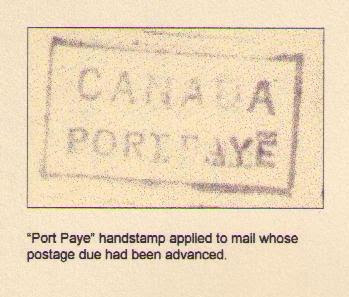 The sender would receive a card advising that postage had been advanced and requesting payment of the deficiency (single) by attaching stamps on the card and mailing it to the post office. 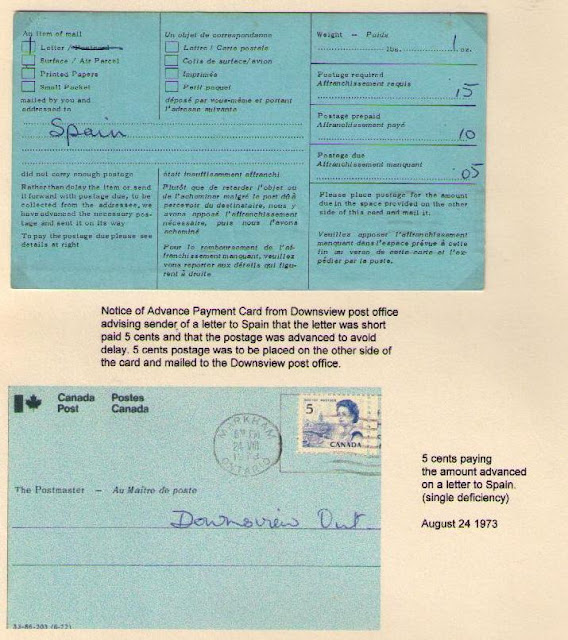 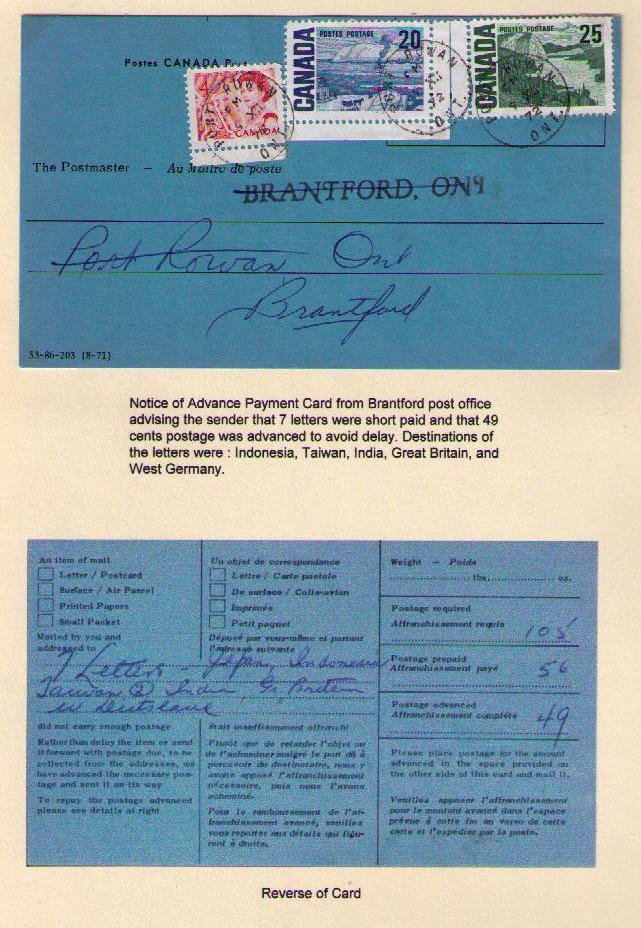 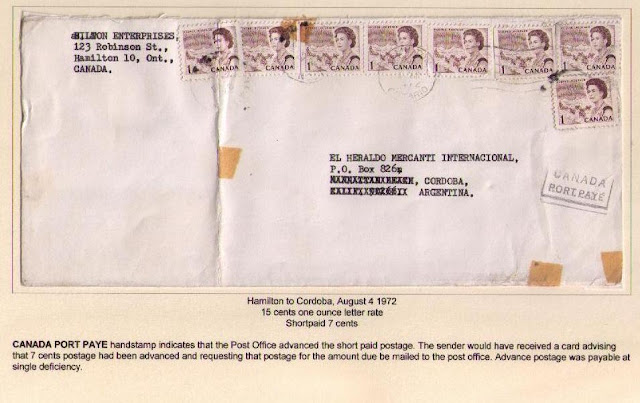