This article provides an overview of domestic parcel post mail rates during the Centennial period. There were five parcel post rate periods:

Parcel rates were calculated on the basis of weight (weight limit 25 lb.) and destination (parcels over 12 oz.). Special rates applied to parcels to and from the Northwest Territories.

This example of parcel rates is the chart for parcels mailed from Manitoba: 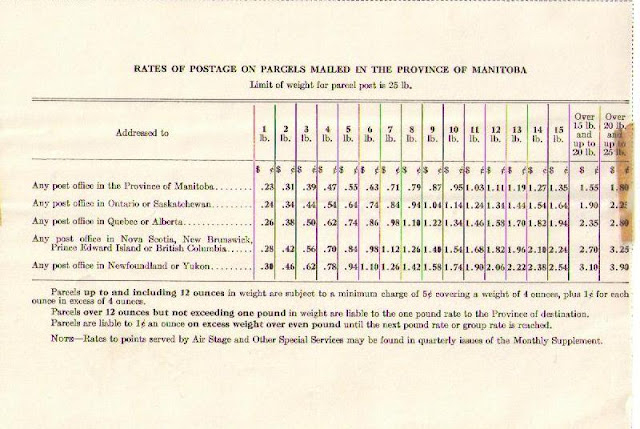 a) Parcels up to and including 12 ounces

Postage for parcels up to and including 12 ounces was the same for all destinations. Parcels were subject to a minimum charge of 5 cents covering a weight of 4 ounces, plus 1 cent for each ounce in excess of 4 ounces.

Parcels over 12 ounces but not exceeding one pound in weight were liable to the one pound rate to province of destination.

c) Parcels weighing over an even pound of weight:

On October 1, 1967, the uniform parcel rates that applied to parcels up to 12 ounces was increased to parcels up to 1 lb. As well, "parcel rate zones" were introduced to calculate rates of parcels over 1 lb. :
The Northwest Territories had been excluded from the zone structure and special rates for parcels to and from the NWT were in effect. 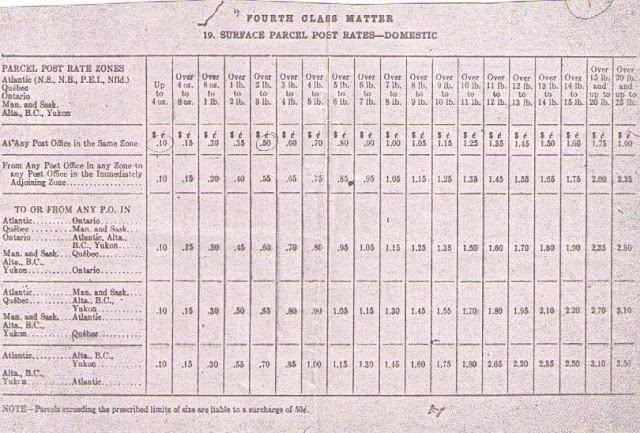 Rates for parcels weighing less than one pound were incorporated into the chart.

The rate for a parcel weighing over 8 ounces to 1 lb. was 30 cents to all destinations. The rate zone table begins with weights over 1 lb.

The previous method of charging parcels in excess of even pound weights was changed. Charge categories were now within weight ranges, eg. over 1 lb. to 2 lb. The rate for a 1 lb. 1 oz. parcel was the same as that for a 2 lb. parcel.

Parcels exceeding size limits were subject to a surcharge of 50 cents.

Surface domestic Fourth Class matter (parcel) rates were calculated according to the weight of the object (over 1 lb.) and the number of rate zones to be crossed.

The chart below provides examples for each zone. 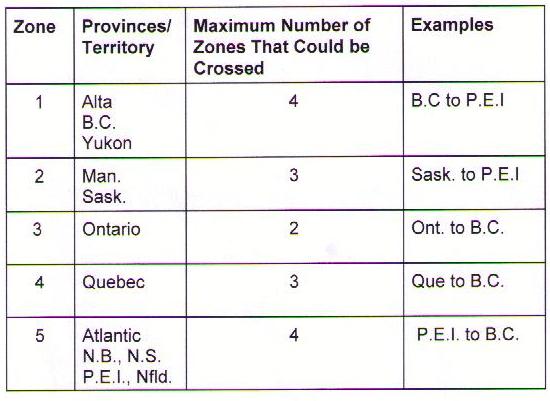 As can be seen, Ontario mailers enjoyed the cheapest parcel rates because of the province's central location.

The definition of "Domestic Fourth Class Matter" was amended on November 1, 1968 to read: "all mailable matter, weighing more than one pound and not requiring payment at the first class mail rate...

A 10 ounce parcel in the previous rate period would have been charged 30 cents as it fell under the "over 8 oz. to 1 lb." category. 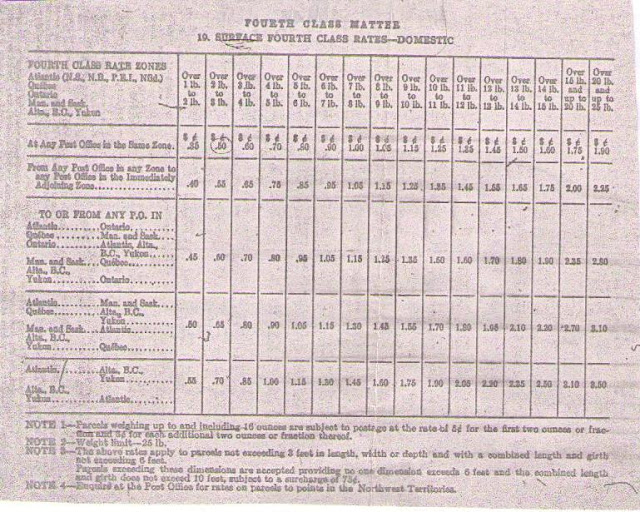 Rates for parcels over 1 1lb. were unchanged. The surcharge for oversize parcels increased from 50c to 75c. 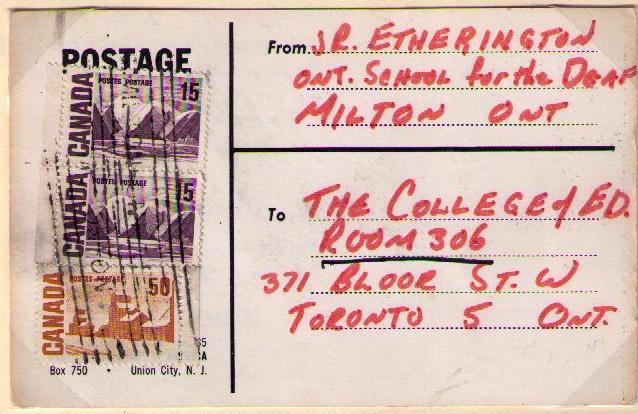 Milton to Toronto, undated roller cancellation
Package was sent in early 1968
80 cents = 5 lb. to 6lb. rate for parcel sent within the same zone. 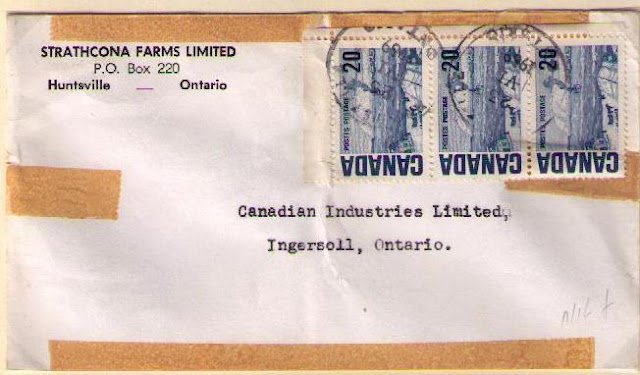 The parcel rates now started at 1 lb. with the elimination of all rates less than 1 lb. Also, the rates for each weight class and destination increased. The size surcharge remained at 75c. 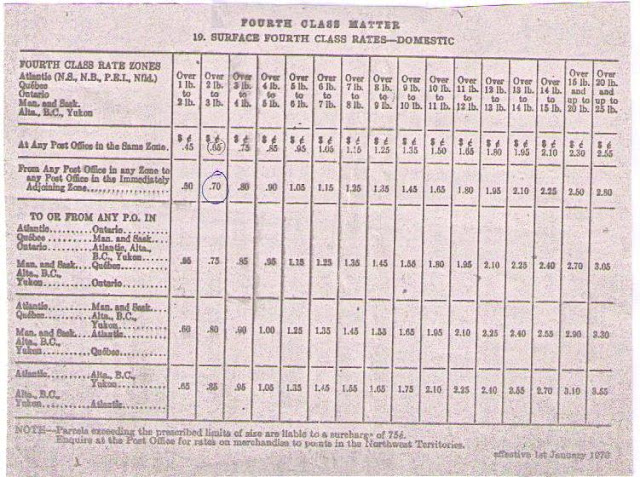 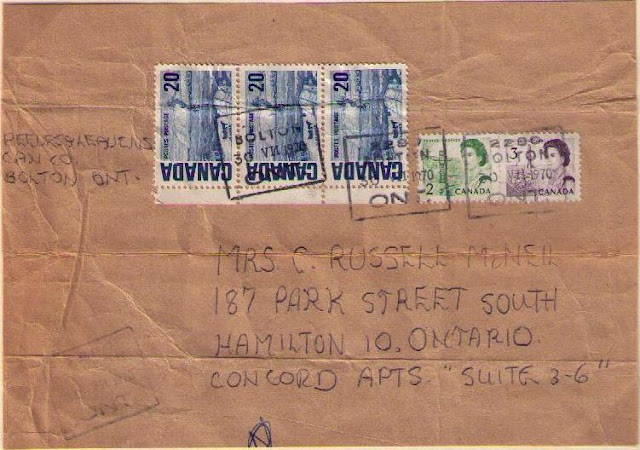 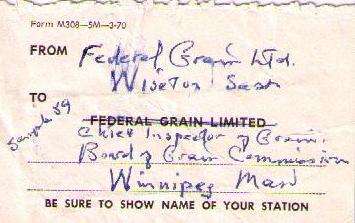 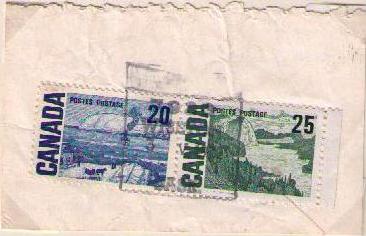 The Insurance fees were: 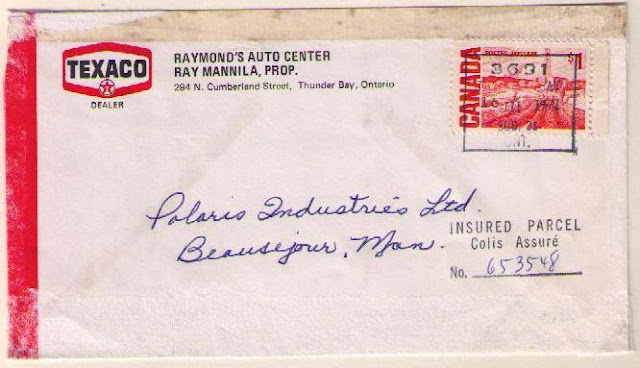 All other rates were unchanged. 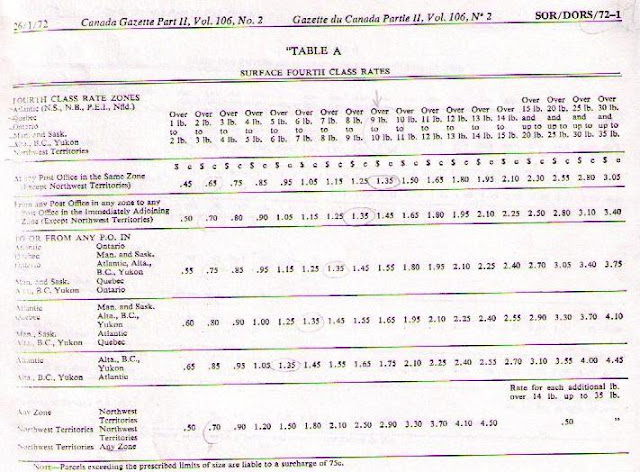 Returnable films sent from Montreal to Willowdale, Ontario had a two-sided address card which fit into a plastic sleeve. 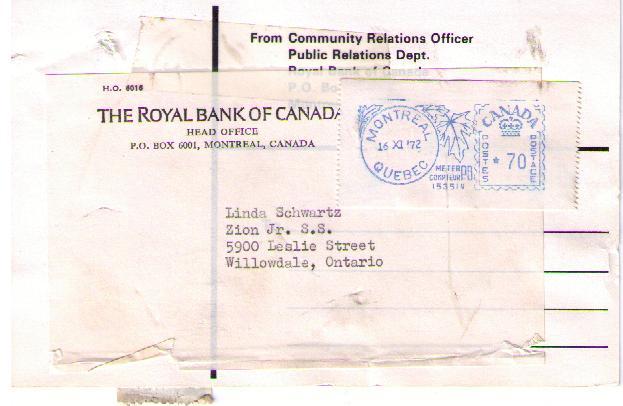 The same parcel was returned to Montreal from Willowdale: 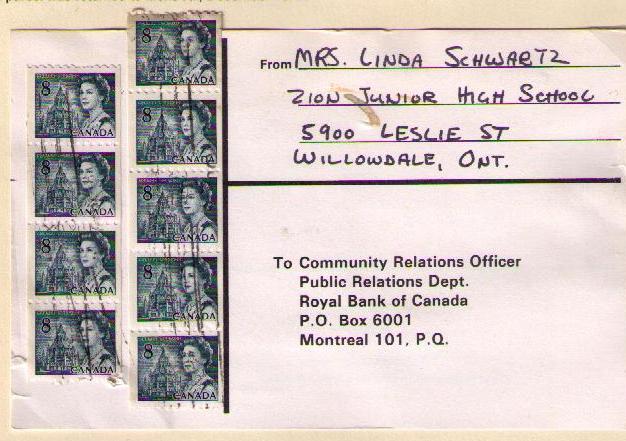