A hovercraft or air-cushion vehicle (ACV) is a vehicle which can travel over surfaces while supported by a cushion of high pressure air which is ejected against the surface below and contained within a "skirt". ACVs are able to travel over land, ice, and water.

This post considers hovercraft use in Canada from 1972 to 1977, showing souvenir mail from ACVs produced by the following manufacturers:

The Saunders-Roe SR.N5 was a medium-sized hovercraft which first flew in 1964. It was the first production-built hovercraft in the world. The Canadian Coast Guard used an SR.N5 for rescue and survey work for 20 years. 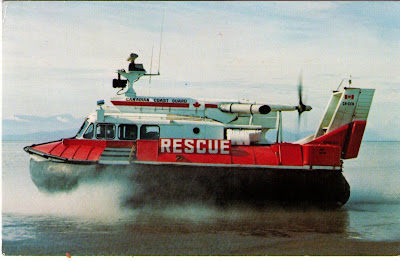 The cover below was carried on Vancouver-based Canadian Coast Guard SR.N5 on Rescue 1000, December 1, 1975, involving the fishing vessel "Mercury". 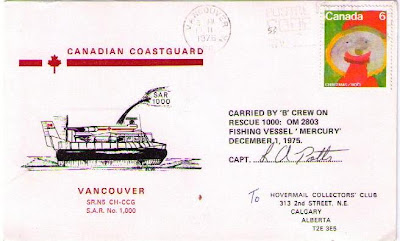 Mailed from Vancouver in February, 1976 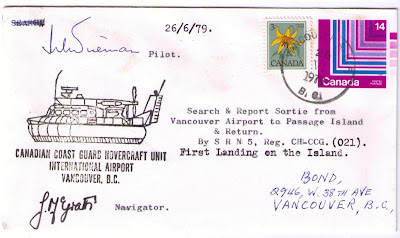 The Saunders-Row SR.N6 hovercraft was a larger version of the earlier SR.N5 series. It incorporated several features that resulted in it quickly becoming the most produced and successful hovercraft design in the world. Compared to the SR.N5, the SR.N6 Mk.1 was stretched in length, with over double the seating capacity. 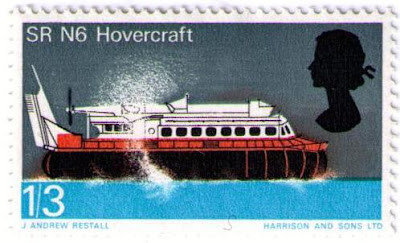 The SR.N6 was used by the Canadian Coast Guard as well as commercial interests in the Northwest Territories.

The Canadian Coast Guard maintains its hovercraft base at Sea Island near Vancouver International Airport, in Richmond, British Columbia. 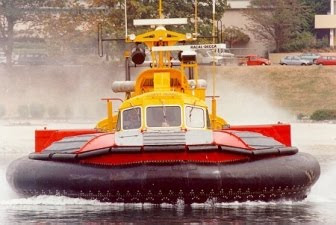 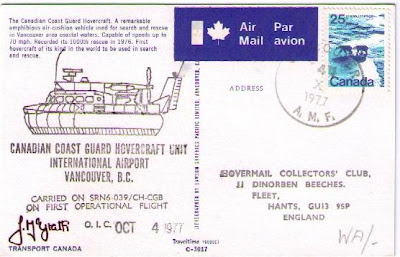 In July and August 1972. Hoverwork Ltd.'s (now Griffon HoverworkLtd.) hovercraft, SRN6-039 , was chartered to carry out a seismic survey in the Beaufort Sea and the McKenzie Delta. 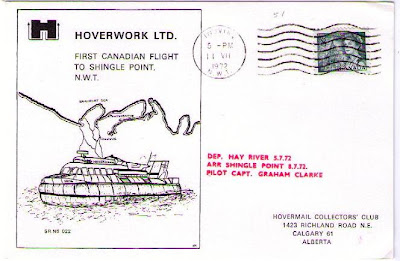 Northern Transportation Company Ltd. (NTCL) is an Arctic marine transportation company. The covers below were carried on NTCL Air Cushion Vehicle Division flights in Alberta and the Northwest Territories. 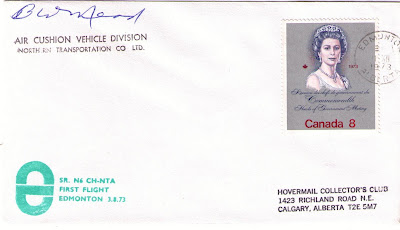 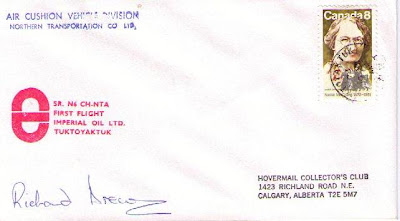 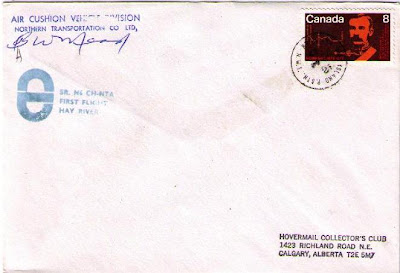 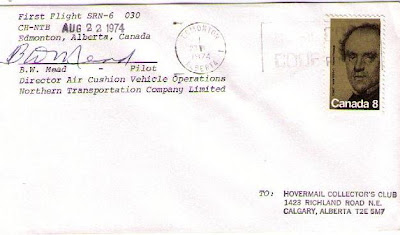 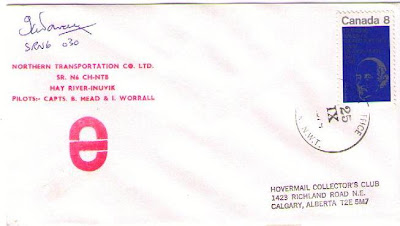 Bell Aerospace Canada designed the Voyageur Hovercraft to carry a 25-ton payload over Arctic terrain. The Voyageur was first tested in December, 1971. 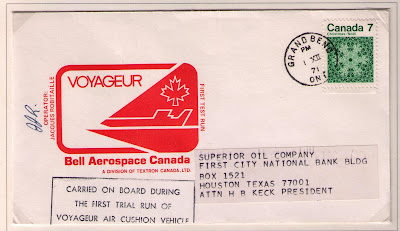 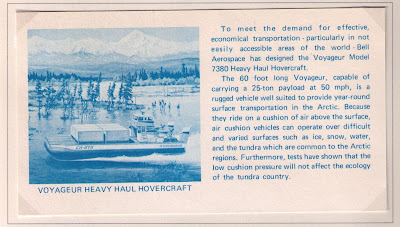 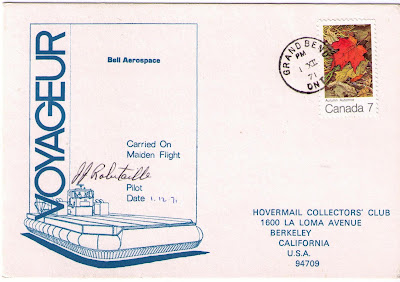 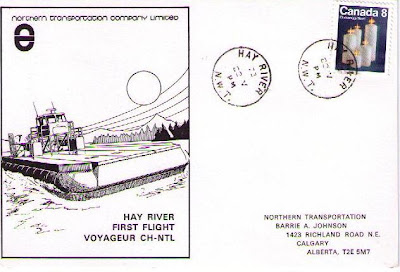 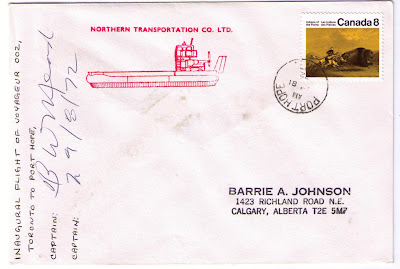 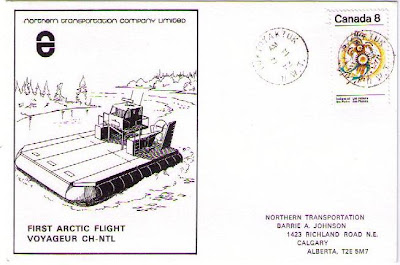 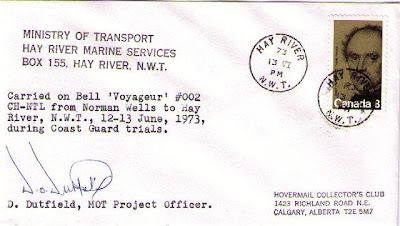 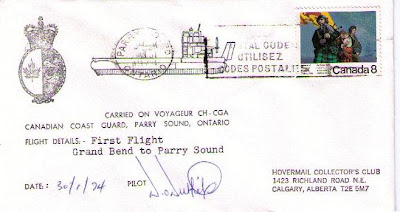 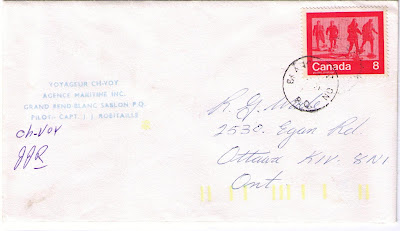 The Viking was designed to meet the need for a smaller craft than the Voyageur. 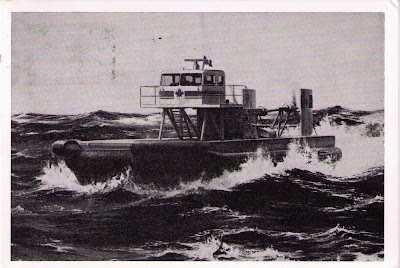 The Viking program was eventually scrapped when transmission problems from the twin propeller system proved too expensive to solve. 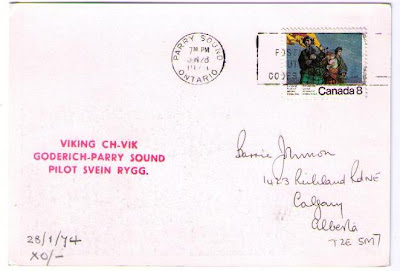 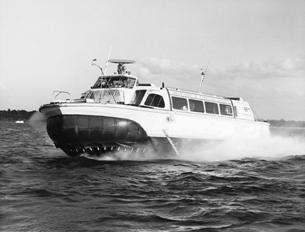 The vessel had a cushion like a hovercraft and twin hulls like a catamaran, which made it more resistant to slipping sideways when acted on by air or sea. Over 110 HM.2's were manufactured in the UK and US.

In July, 1974, the first HM 2 passenger service in North America was inaugurated between Niagara-on-the-Lake and Toronto. 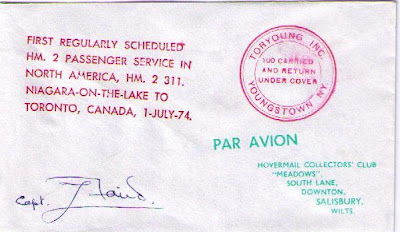 The service ended in the fall of 1974 with the failure of the operating company.
Posted by philcovex at 3:36 AM