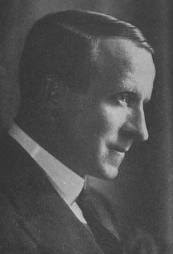 John Buchan (1875-1940) was a Scottish-born lawyer, colonial administrator, publisher, journalist, historian, parliamentarian, and author who served as Governor-General of Canada. He wrote over 100 books, including the suspense novel The Thirty-Nine Steps which became famous when Alfred Hitchcock made it into a movie in 1935. 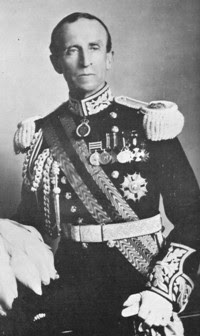 King George V died in 1936. Envelopes mailed by the Governor General's office during the mourning period were framed in black. The cover below was mailed from Quebec City, location of the Citadelle, the second official home and workplace of Canada’s governor general, to the mayor of Prince Albert, Saskatchewan.

The letter, sent free, was franked by the Assistant Secretary to Lord Tweedsmuir: 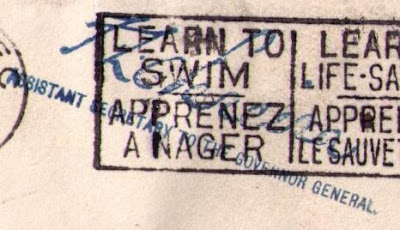 In 1937, Lord Tweedsmuir toured the Arctic Circle. He travelled down the Mackenzie River from Fort Smith to Aklavik, NWT, on board the Hudson's Bay Company sternwheeler SS Distributor. The steamboat became a temporary post office during the three week trip. 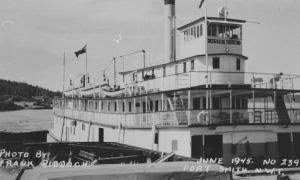 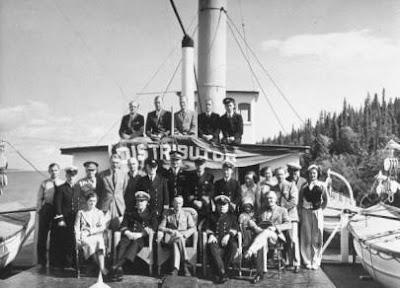 Lord Tweedsmuir and party aboard the S.S. Distributor 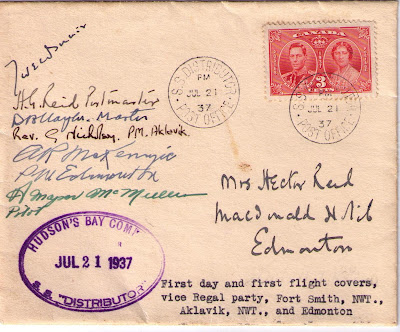 SS Distributor circular date stamp and oval ship marking, July 21, 1937 (departure from Fort Smith). Aklavik receiver postmark August 1, 1937 on the back of the envelope. Then, Aklavik to Edmonton by air, Edmonton receiver August 7, 1937. 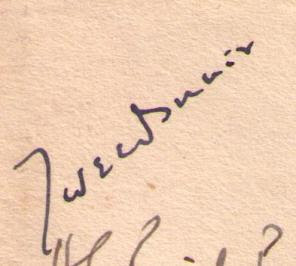 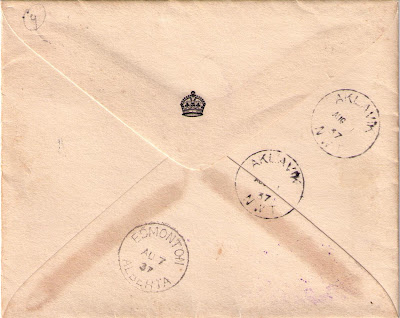 A sheet of the Governor-General's Train writing paper was enclosed in the envelope:

In 1936 Lord Tweedsmuir created the Governor General's Literary Awards, which continue to be Canada's most prestigious recognition of literary merit. 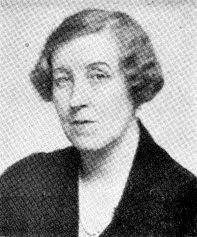 Lady Tweedsmuir wrote many books and plays, and was active in promoting literacy in Canada. At a meeting of the Athens (Ontario) Women's Institute, Lady Tweedsmuir stressed the need for preserving the history of Canadian people. She suggested that Ontario Women's Institute Branches keep local history books as the WIs in England did, where she had been a devoted member. These histories were named Tweedsmuir History Books (or Tweedsmuirs as they are commonly known)

On February 6, 1940, Lord Tweedsmuir had a stroke and injured his head badly in the fall. On February 11, just 10 months before his term of office was to expire, Lord Tweedsmuir died. Prime Minister McKenzie King read the following words over the radio: "In the passing of His Excellency, the people of Canada have lost one of the greatest and most revered of their Governors General, and a friend who, from the day of his arrival in this country, dedicated his life to their service." 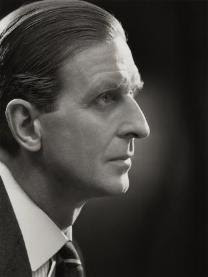 John Norman Stuart Buchan (1911 - 1996) ,was the eldest son of John Buchan and Susan Grosvenor. He was a naturalist, a gallant soldier and fine writer of English, an explorer, colonial administrator and man of business.

In 1936, Buchan joined his parents in Canada. He worked for the Hudson’s Bay Company, drove a dog team 3,000 miles, and spent the winter of 1938-39 at the trading post at Cape Dorset, N.W.T. With the outbreak of WWII he enlisted in the Governor General's Foot Guards and was with the first Canadian troops to arrive in England in December, 1939.

He succeeded to the title of Baron Tweedsmuir upon his father's death, receiving his army company on the same day. He saw action with the Hastings and Prince Edward Regiment in Sicily. He served with the the General Staff in Italy, responsible for liaison between the British and Canadian contingents.

For twenty-one years he was President of the British Schools Exploring Society (BSES), a youth development charity based in the United Kingdom, which operates expeditions for young people to wilderness environments. Since its formation in 1932, BSES has organised over 130 expeditions and visited all seven continents.

BSES organised a two month expedition in the Yukon in 1986. The souvenir cover below was mailed from Whitehorse, July 16, 1986. The cover was autographed by Lord Tweedsmuir who was President of the BSES and BSES alumnus Admiral of the Fleet Terence Lewin, Baron Lewin (1920-1999) who went to Newfoundland with BSES in 1938. Lewin had a distinguished military career and was appointed First Sea Lord and Chief of Naval Staff . He was Chief of the Defence Staff and member of the War Cabinet during the Falkland War. 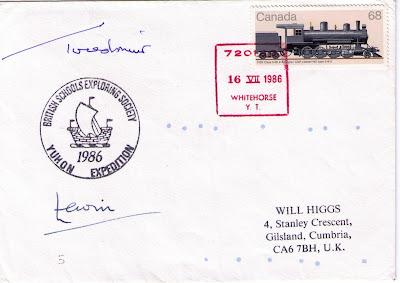 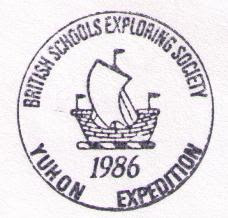 Posted by philcovex at 6:11 AM