Postage Rates Within the Province of Canada

This article deals with the basic rates in effect from 1851 to 1859. Although Canada's first postage stamps were issued in 1851, their use to prepay postage was not compulsory until 1875. The rates in this post are shown with the more common "stampless" rate markings of the period.

Rates within the Province of Canada prior to 1851 were based on the distance to be carried and weight.

The pound was the unit of account for currency of the Province of Canada until 1858. The pound was subdivided into 20 shillings (s.), each of 12 pence (d.). Canadian money was called "Currency". The British pound (Sterling) was equal to 1 pound 4 shillings 4 pence (Currency).

The rates for single letters ( 1/2 ounce or less) are summarized in the table below. 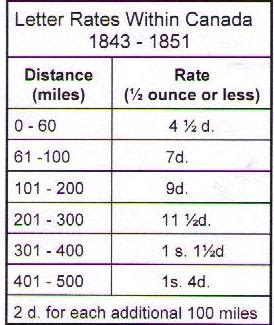 During this period, letters could be sent paid or unpaid:
Two covers are shown below which illustrate the markings typically seen on paid and unpaid letters during the 1843 to 1851 period.

The first cover, shown below, is a paid letter mailed from Ancaster to Chippawa, a distance between 61 and 100 miles. The single letter rate for that distance was 7d.

The Ancaster town postmark was applied on April 7, 1846. 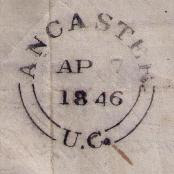 The 7d. postage rate was written in red ink in the upper right hand corner of the cover and a "PAID" handstamp was applied next to the rate marking:


The second cover, shown below, is an unpaid letter sent from Drummondville (later the Village of Niagara Falls) to Kingston. 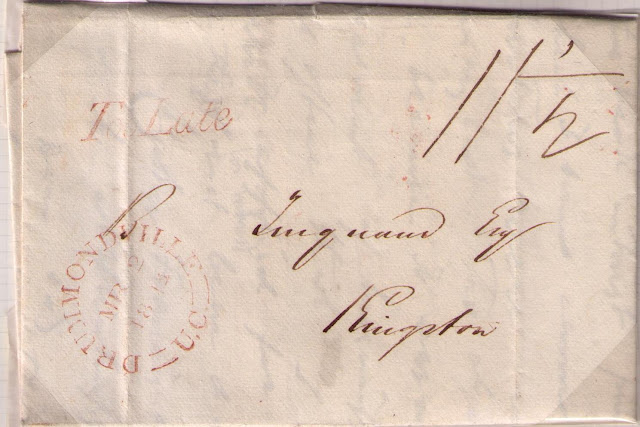 The Drummondville town postmark was applied on March 2, 1844. 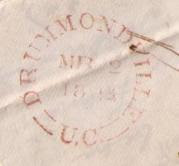 The postage rate was 11 1/2d., the single letter rate for a distance between 201 and 300 miles. Since this was an unpaid letter, the rate was written in black ink. 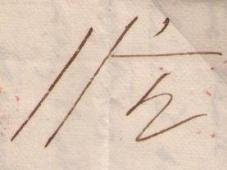 "TOO LATE" was stamped on the cover because the cover was delivered to the Postmaster too late to be included in the mails last made up and closed for despatch.


In 1851, the Canadian Provincial Parliament introduced a uniform letter rate of 3 pence per half-ounce, for all distances conveyed within the colony. Letters could still be sent paid or unpaid.


A large number of handstamps with figures denoting amounts paid or due were manufactured during this period.

Postage stamps were first issued in 1851, but postmasters did not like using the new adhesives, as Fred Jarrett explains in his 1929 reference book Stamps of British North America, at p. 465:


"Postmasters, did not take kindly to the use of adhesive stamps which had to be cut from the sheet, sold to the customer, and then defaced with a cancelling instrument.They claimed a commission on stamps sold, and not receiving it they preferred to collect the rate in cash and stamp the letter "PAID" opposite the amount of the postage. This meant less bookkeeping for the postmaster. "

The letter rate was 3 pence for each one-half ounce. 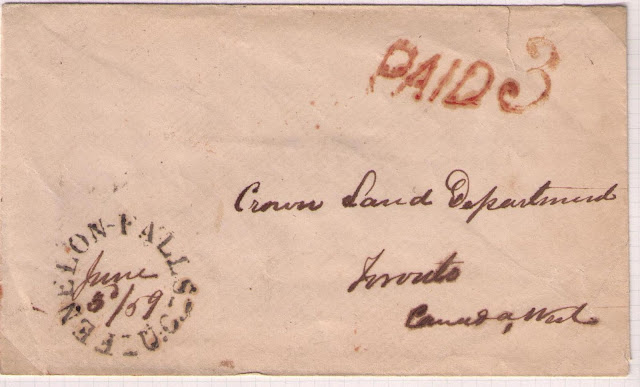 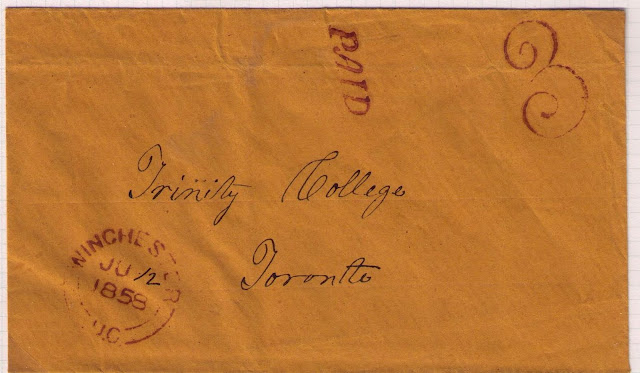 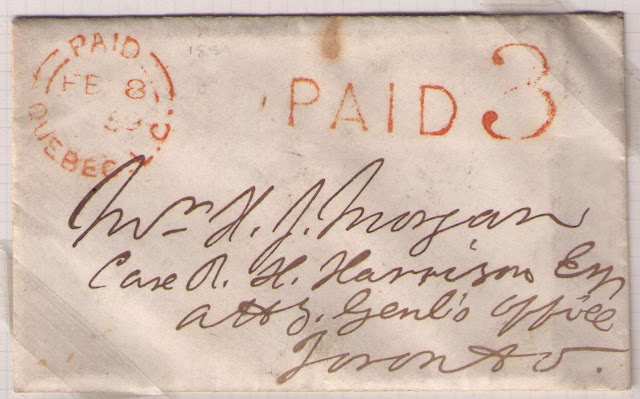 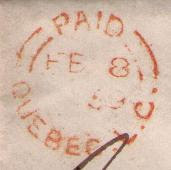 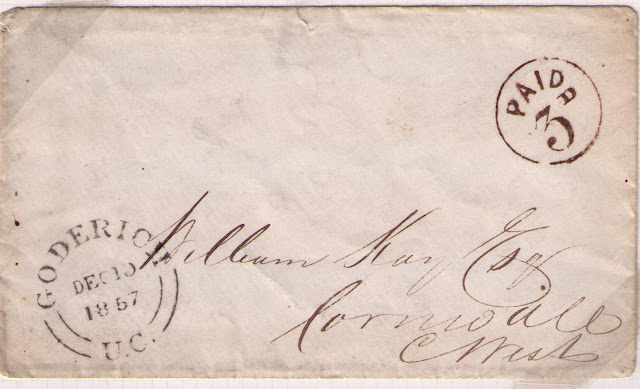 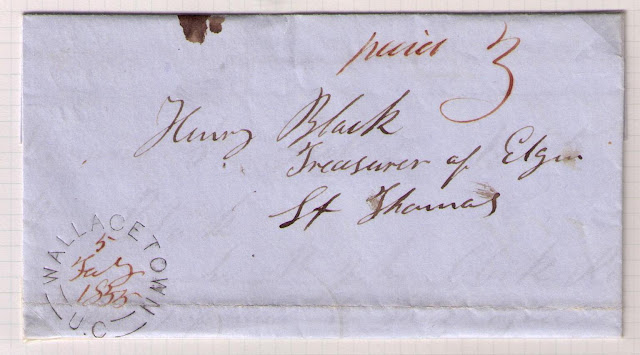 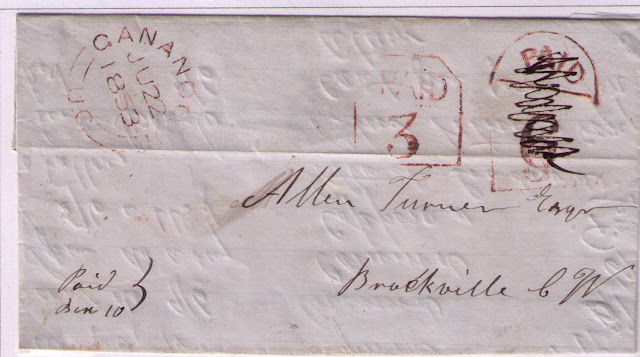 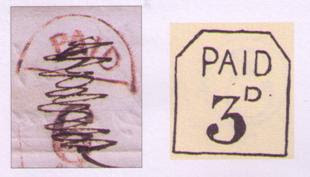 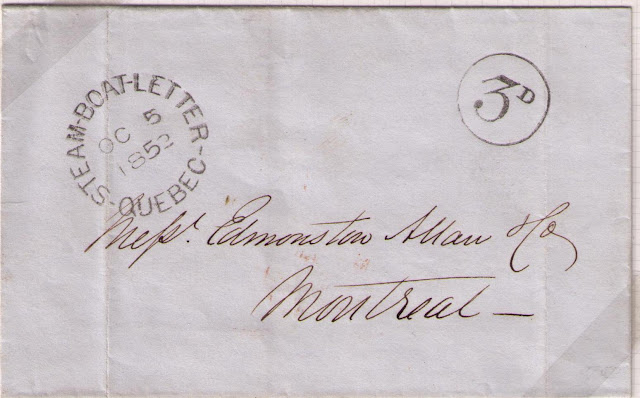 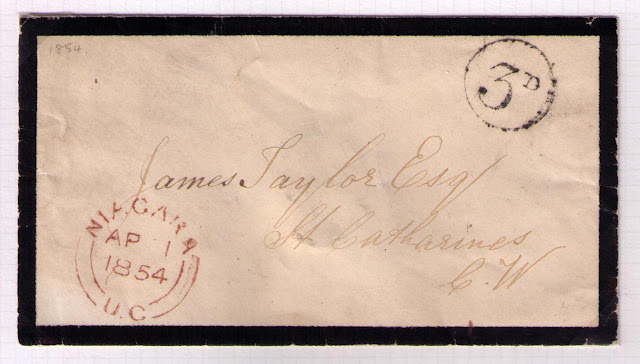 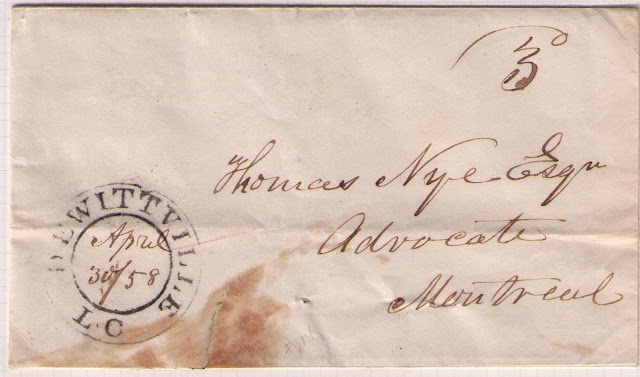 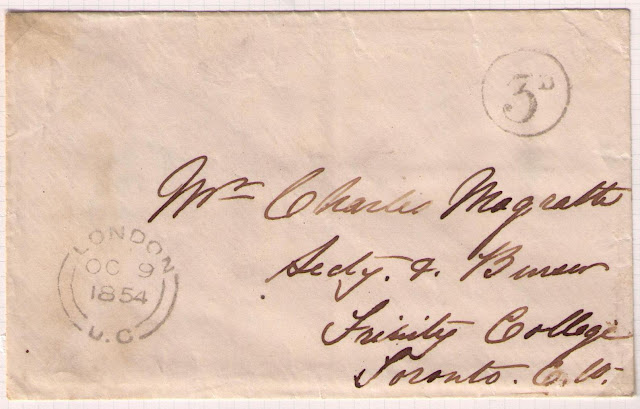 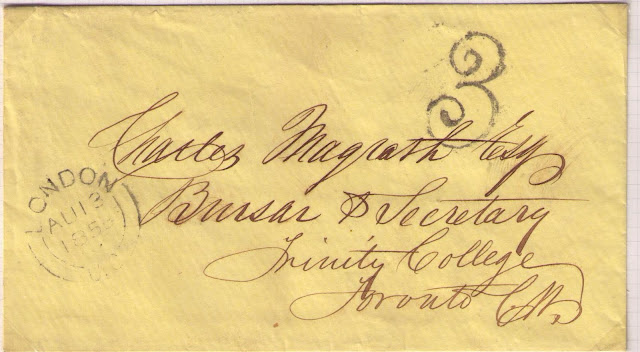 The one ounce letter rate was 6 pence. 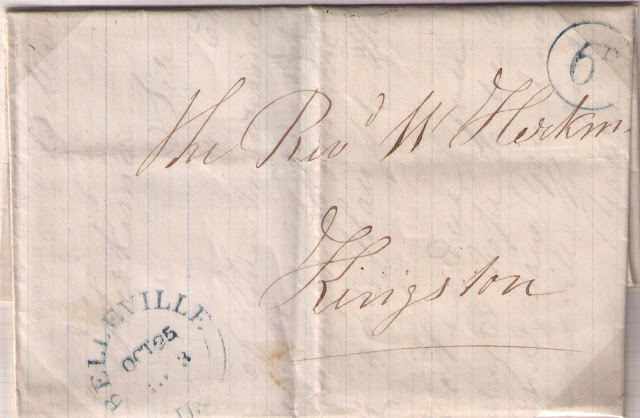 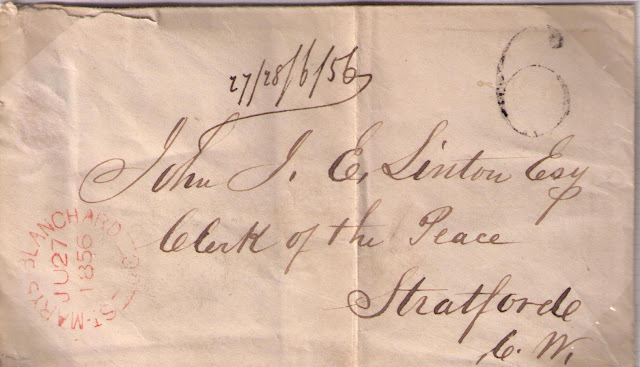 The local letter rate was 1/2 pence. 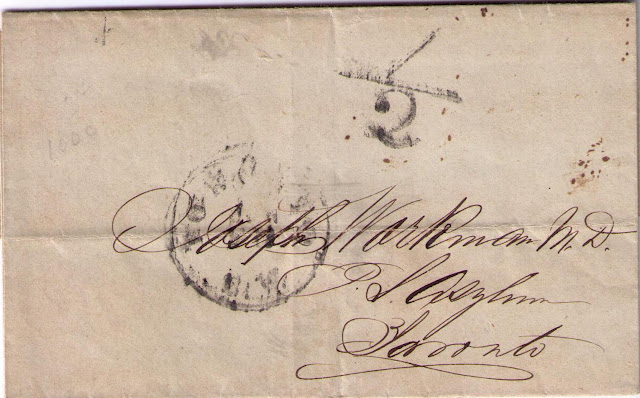 Dr. Joseph Workman (1805 - 1894) was a physician, merchant, politician, teacher, and asylum superintendent. Dr. Workman served as the superintendent of the Provincial Insane Asylum form 1853 to his retirement in 1875.

A system of recording letters containing money was in operation from 1826. The sender was not given a receipt but the recipient had to give a receipt to the Post Office. "Money" or "Money Letter" was written on the letter. There was no charge for this service. No compensation was paid for loss. 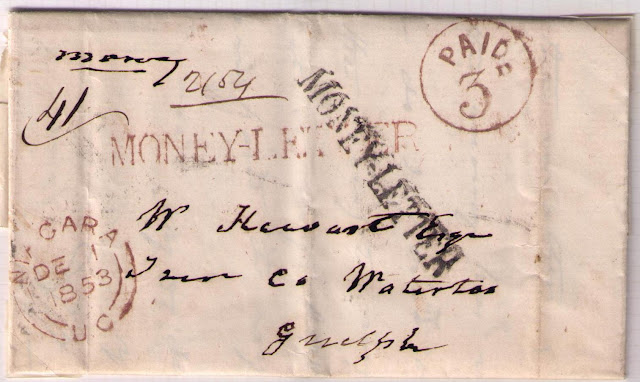 Montreal "MONEY-LETTER" handstamp
The letter had been missent to Montreal 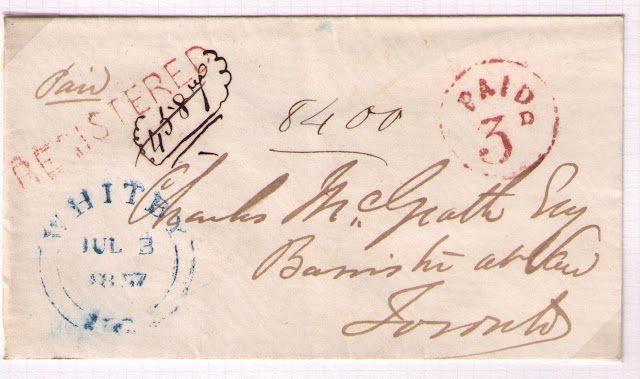 Posted by philcovex at 1:14 PM