On July 1, 1867, the colonies of the United Province of Canada, New Brunswick, and Nova Scotia formed the Dominion of Canada. Postal services continued pursuant to colonial legislation existing prior to Confederation until April 1, 1868 when the Dominion of Canada's Post Office Act came into operation. Until October 1875, the payment of postage with stamps was optional and letters could be mailed paid or unpaid.

On April 1, 1868, the first set of Dominion of Canada stamps with the vignette of "Victoria Head to Right"was issued. Beginning in 1870, the original issue was replaced by a smaller size. The original 1868 design is referred to as the "Large Queens" while the small design is referred to as the "Small Queens". The Small Queens saw long service and were finally replaced in 1897. 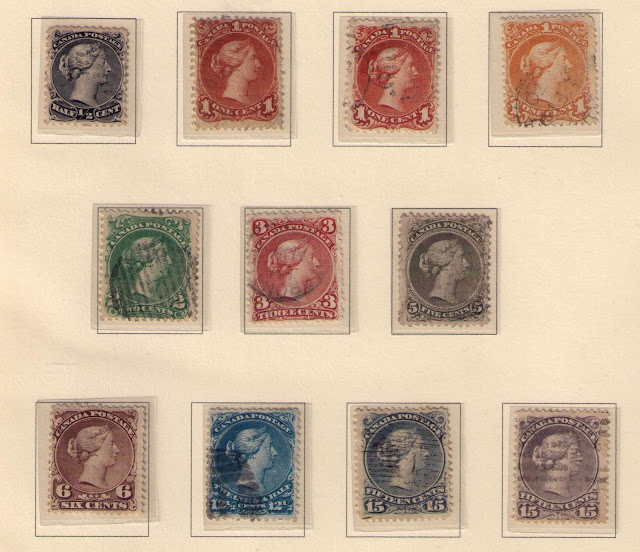 1870 -74 "Small Queens"
(Additional denominations were issued. The Small Queens were replaced in 1897)


This post deals with postal rates within the Dominion Canada, as well as to the United Kingdom and the United States, showing stampless and stamped covers.


A. Rates Within Canada 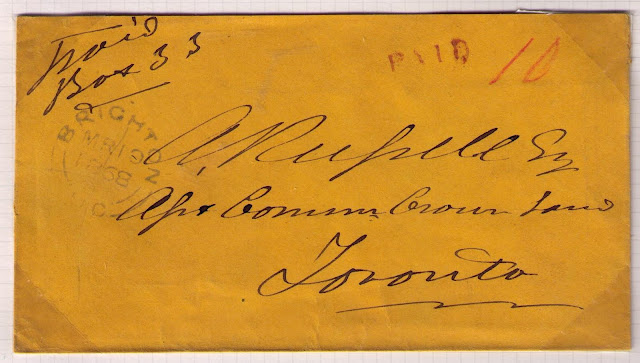 Letters could still be mailed prepaid without stamps, although the use of stamps became the normal practice. 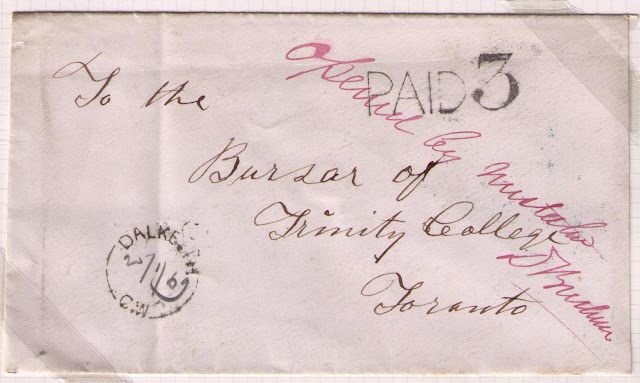 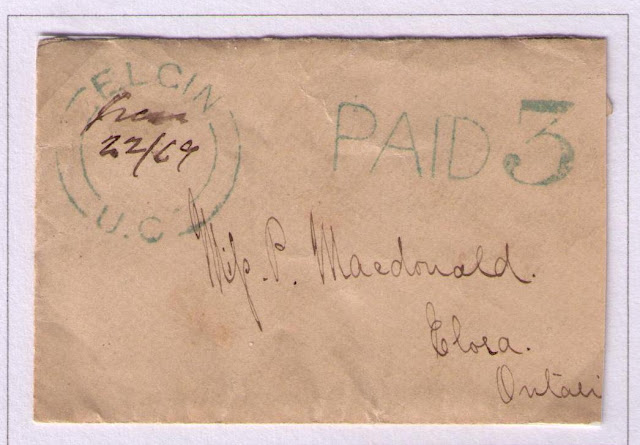 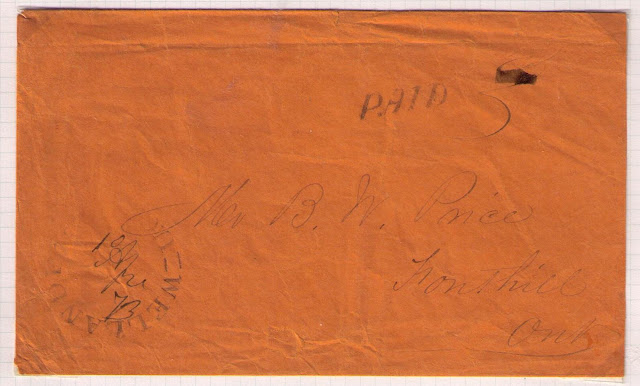 "PAID" handstamp and numeral 3 in manuscript 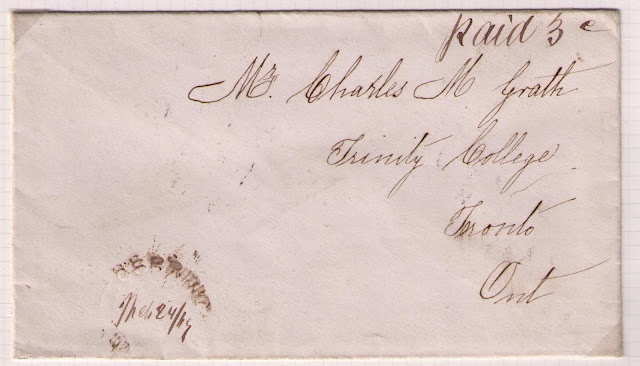 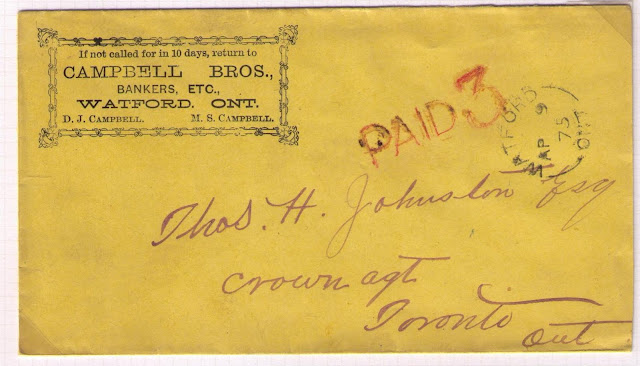 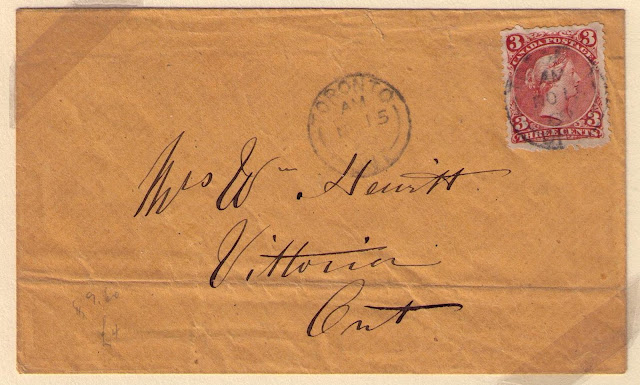 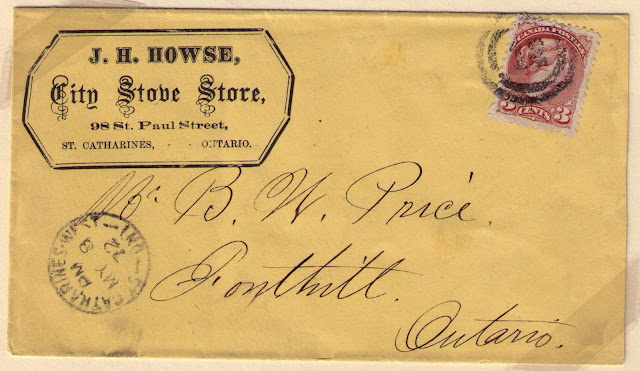 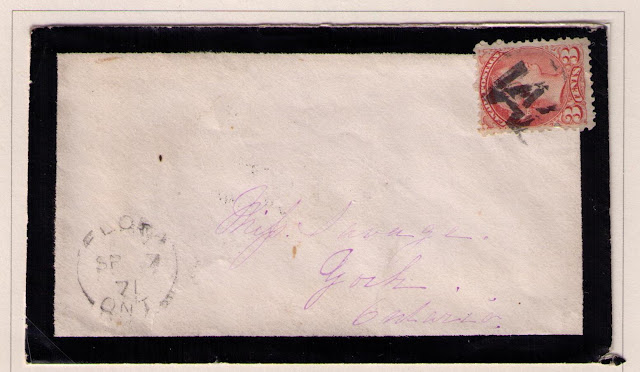 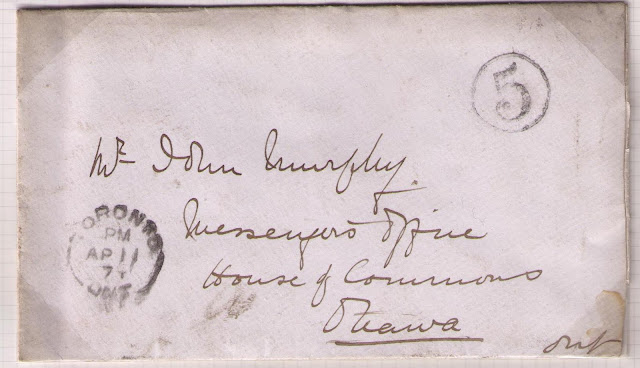 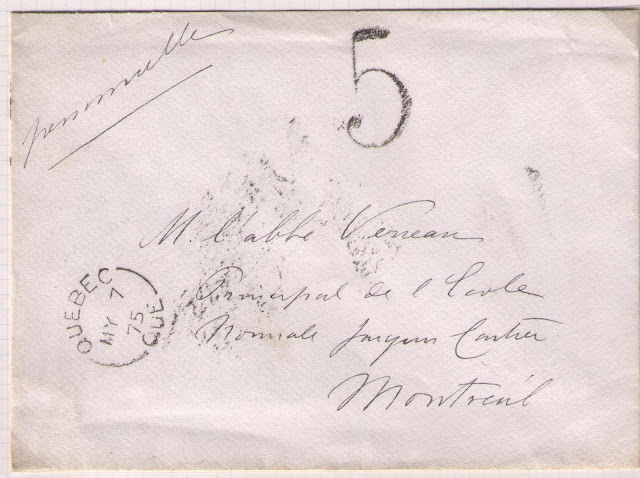 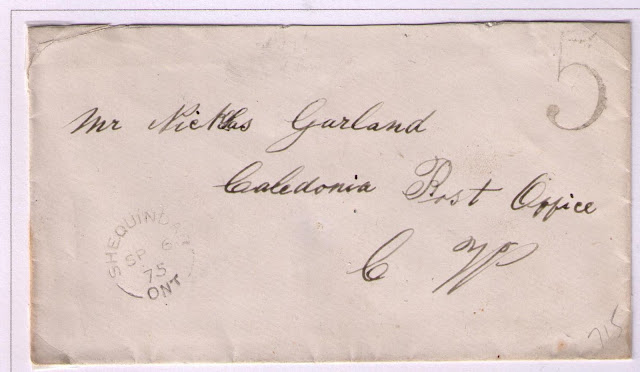 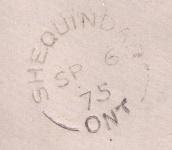 The registration fee was 2 cents making a total of 5 cents for a registered letter. 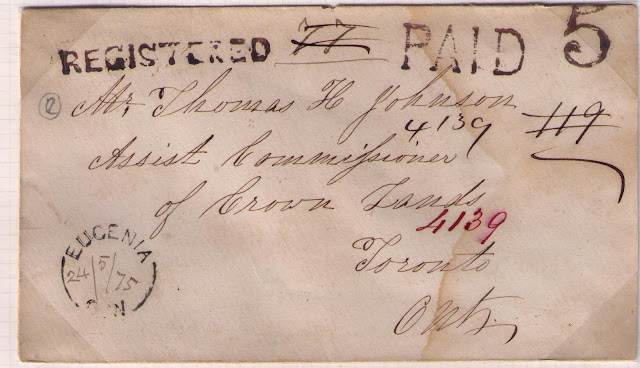 
B. Rates to the United Kingdom

The letter rate was 6 d. sterling, or 12 1/2 cents per one-half ounce. If forwarded unpaid, a fine of 6d. sterling in addition to postage was charged. 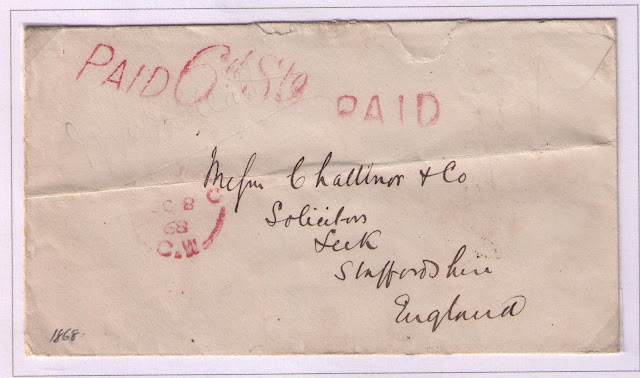 The Inman Line was awarded a contract to carry mail from Halifax commencing January 1, 1868. The contract lasted until 1871 when it was taken up by the Allen Line. The rate by this route was 12 1/2 cents (6d. sterling). 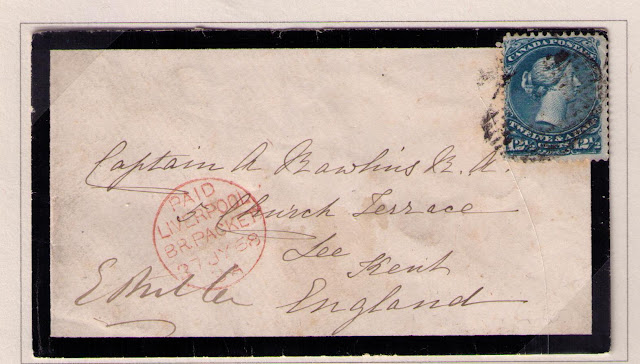 Letters sent prepaid by Canada Mail Packet via Quebec, (Portland in the Winter) or Halifax was 6 cents per one-half ounce. The rate via New York was 8 cent per one-half ounce. Unpaid letters were charged on delivery double the amount of deficient postage. 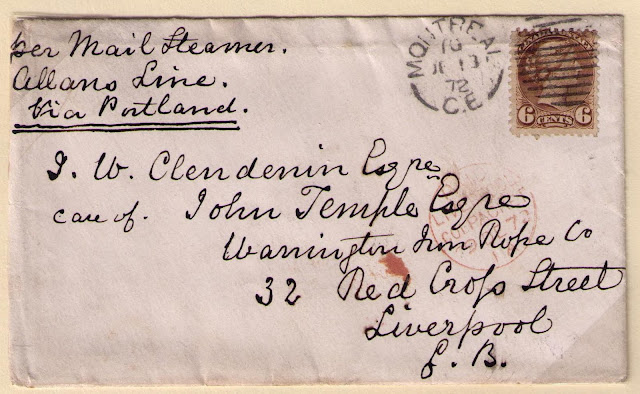 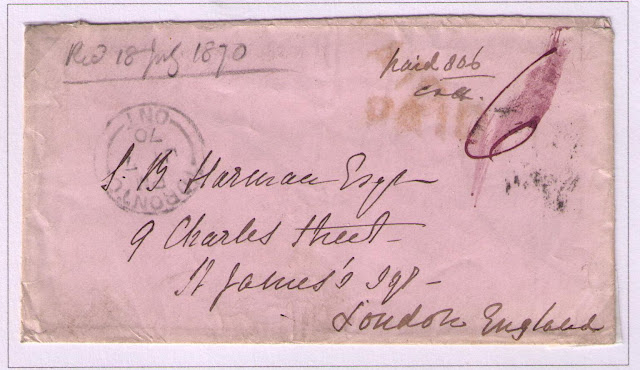 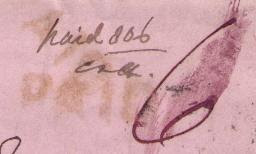 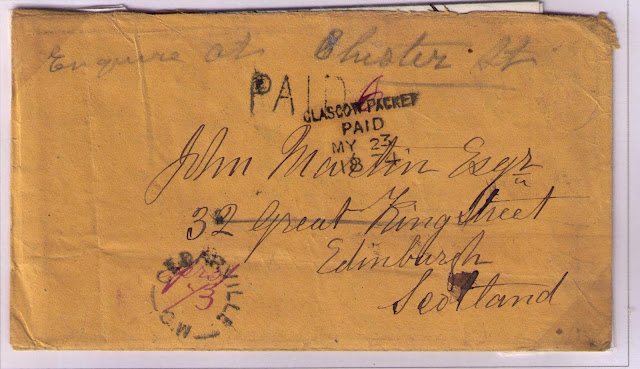 
C. Rates to the United States

The letter rate was to the United States was 6 cents for each one-half ounce if prepaid. Unpaid letters were charged 10 cents. 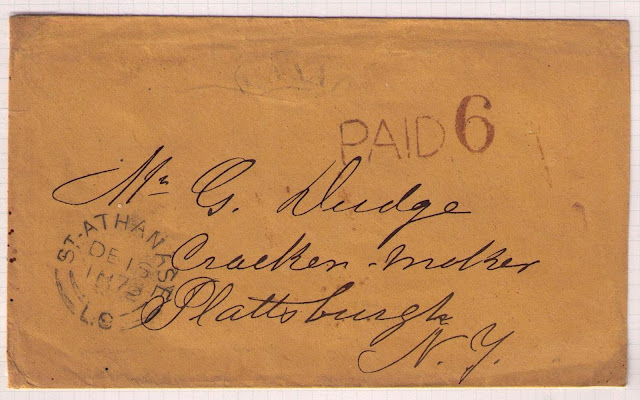 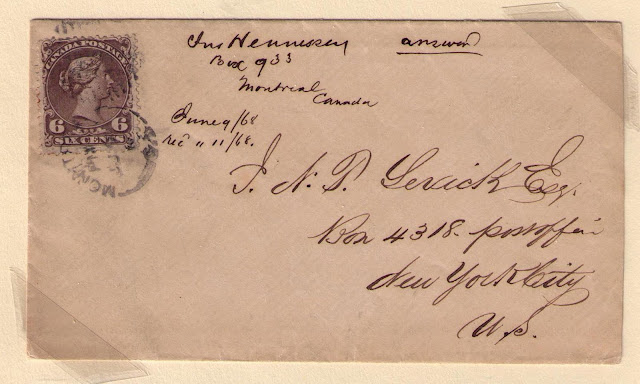 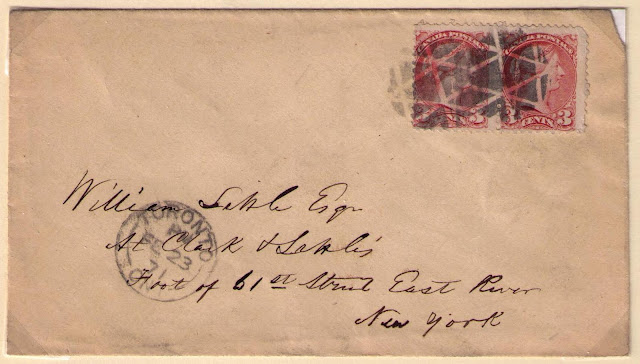 Letters to the United States were to be prepaid at a rate of 3 cents for each one-half ounce (the same as the Canadian letter rate). 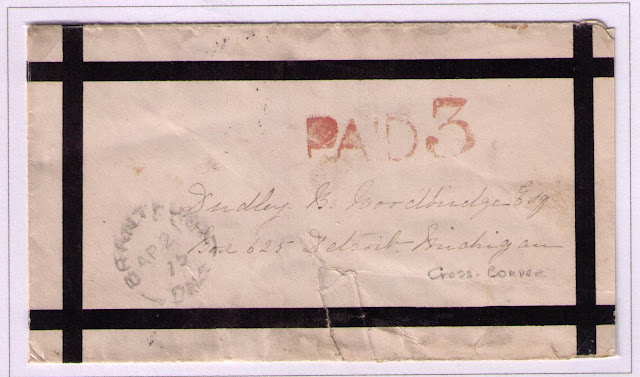 
Since the use of postage stamps became compulsory on October 1, 1875, the cover below is a very late "stampless" cover. 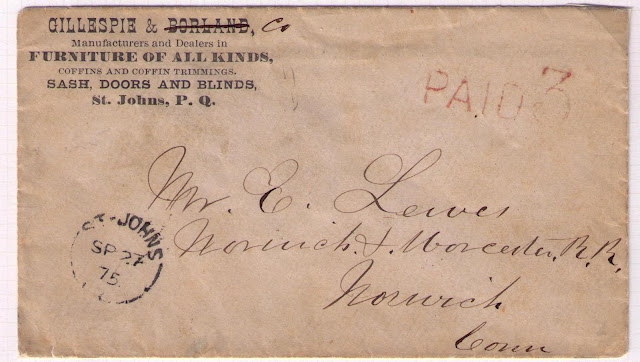