In 1930, the Toronto Terminal "A" post office used a slogan cancellation to commemorate the dedication of the Shrine Peace Memorial at the Canadian National Exhibition grounds. The memorial, unveiled on July 12, 1930 during the Shriners' Convention, marked over a century of peaceful relations between Canada and the United States. 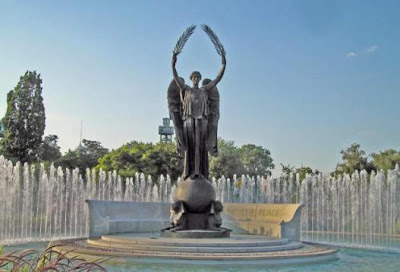 The slogan, shown below, includes illustrations of a peace dove and statue. 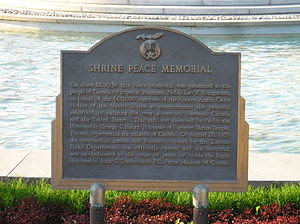 On June 21, 1930 this Peace Memorial was presented to the people of Canada by Imperial Potentate, Noble Leo V. Youngworth on behalf of the 600,000 members of the Ancient Arabic Order Nobles of the Mystic Shrine to commemorate the peaceful relationships existing for over a century between Canada and the United States. This gift was received by Noble the Honorable George S. Henry, Potentate of Rameses Shrine Temple, Toronto, representing the citizens of Canada. On August 20, 1958 the surrounding garden and fountain, created by the Toronto Parks Department, was officially opened and the Memorial was re-dedicated to the cause of peace by Noble the Right Honourable John. C. Diefenbaker, P.C., Prime Minister of Canada.

Posted by philcovex at 6:47 AM