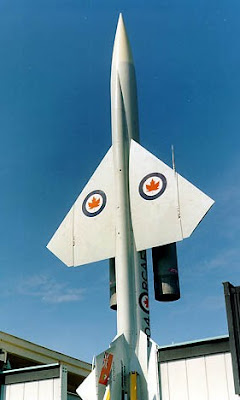 RCAF Station North Bay was one of two Bomarc missile batteries in Canda. In 1958, Canada and the United States entered into the North American Aerospace Defence Command (NORAD) agreement. NORAD was a joint command that provided aerospace warning, air sovereignty, and defense for the two countries. As part of its NORAD commitment, the Diefenbaker government agreed to deploy the U.S. Bomarc surface to air missile (SAM) in Canada, scrapping the Avro Arrow interceptor program arguing that the missile program made the Arrow unnecessary.

Bomarc missiles were installed in batteries in North Bay, Ont. (446 Squadron) and La Macaza, Que. (447 Squadron), and placed under control of NORAD based in North Bay and Colorado, with shared Canadian-American command.

In 1969 Prime Minister Trudeau's Liberal government announced that Canada would withdraw its armed forces from their nuclear roles. As part of this process the Bomarc missile was phased out of service by 1971.

RCAF Station North Bay was home for RCAF 446 SAM squadron. The base had been re-activated in 1951 and used for training. The base became the primary defence site for Toronto and Southern Ontario during the cold war period.

In the late 1950s, an underground NORAD control centre was built in North Bay for an automated control system for tracking and intercepting enemy bomber aircraft (SAGE). The CBC described the chamber as follows:

Norad's Cheyenne Mountain Operations Centre, buried deep in a mountainside in Colorado is a legendary fortress. But Canada has its own underground Norad nerve centre. Near North Bay, Ont., a giant base is being carved out deep into the solid granite of the Canadian Shield. Almost 200 metres below the surface, engineers are excavating a chamber to hold SAGE (Semi Automated Ground Environment) — "the most sophisticated defence system world has ever known." 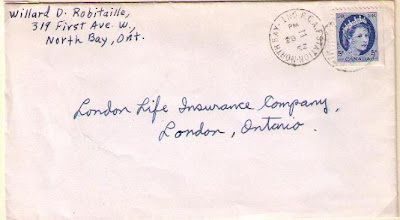 RCAF Station North Bay was formally changed to its present name, Canadian Forces Base North Bay or CFB North Bay on 1 April 1966. The BOMARC missiles were decommissioned in 1973 and the SAGE installation followed in 1983.

In 1966, the RCAF North Bay post office was given the civilian name "Hornell Heights". 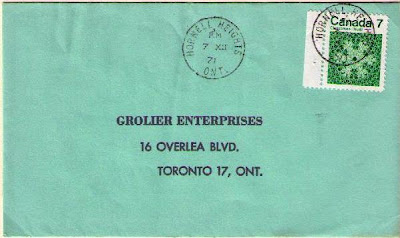 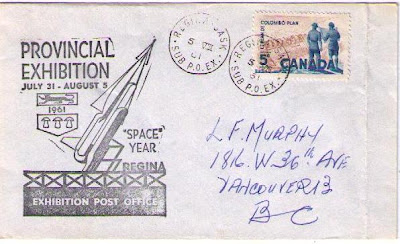 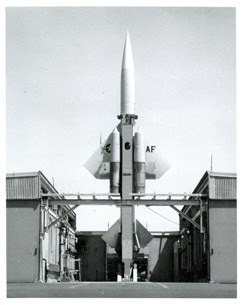 The 1961 Saskatchewan Provincial Exhibition cachet appears to have been modeled on the Bomarc missile.

To ensure that proper qualifications and procedures were maintained, periodic Control Evaluation Launch Exercises were held at the Elgin Gulf Test Range at Elgin AFB, Florida. The exercises were normally held during the Canadian winter months. At least one missile from the Canadian battery was removed from the squadron and transported to Elgin. The missile was fired on a live intercept using non-special weapons to ensure that the Combat Ready Missiles were fully operational. 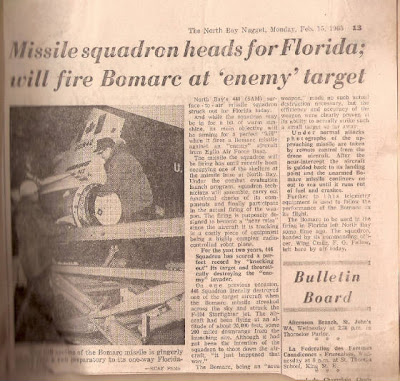 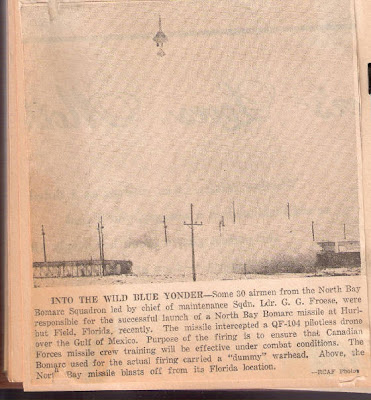 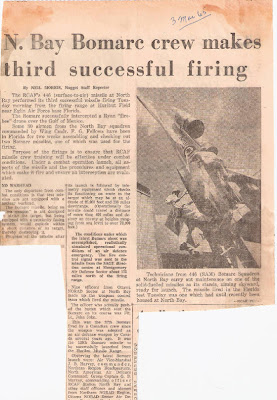 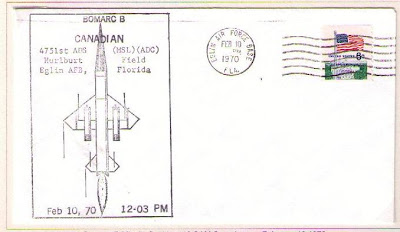