Mail to Hungary 1956-57
In 1956, Hungary was a communist state under the control of the Soviet Union. In October, a demonstration of university students in Budapest led to an uprising against Soviet rule. The short-lived revolution was put down by the Soviet military with the loss of more than 2,500 lives. More than 200,00 Hungarians fled the country, 35,000 of whom came to Canada.
In this post, two covers mailed to Hungary in 1956 and 1957 are shown which illustrate the political turmoil in Hungary.
The first cover was mailed from Oshawa to Mikohasa, Hungary on October 24, 1956, the day following the the student protests in Budapest which sparked the revolution. The letter was returned to the sender as postal service to Hungary had been suspended. 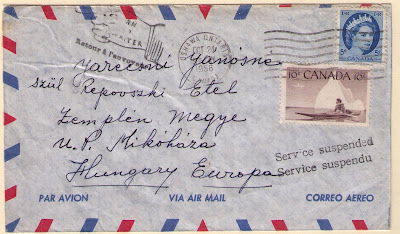 Oshawa to Mikohaza, Hungary, October 24, 1956
Mail service suspended and letter returned to sender
The second cover was mailed in June 1957, several months after the revolution had been crushed. The letter was not admitted into Hungary because its contents did not conform to regulations. No further information regarding the regulation infringement was provided to the sender of the letter.
There are times when covers in less than ideal condition are still worthy of inclusion in a collection. The stamps on the cover shown below were cut out by a collector. The stamps themselves are of little significance compared to the Hungarian instructional markings.
The cover was mailed from Vancouver and addressed to Budapest on June 5, 1957. The removed stamp was likely the 15 cent Gannet definitive. Since the letter was returned to the sender, a 5 cent fee was charged for this service. The stamp cut out to the left of the T 5 cents handstamp was probably a 5 cent postage due stamp. 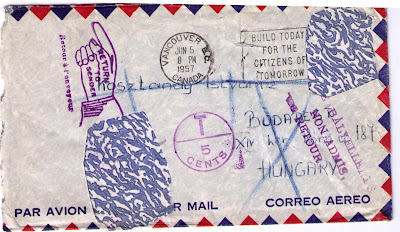 Vancouver to Budapest, June 5, 1957
The reverse of the cover bears the significant markings: 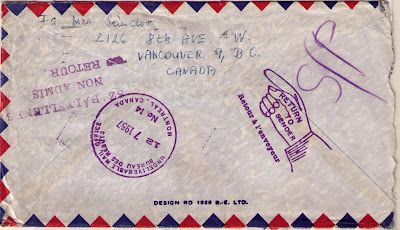 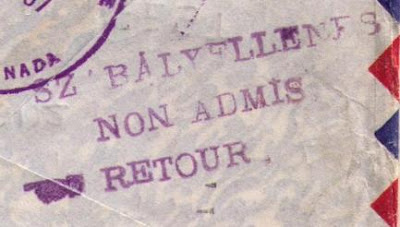 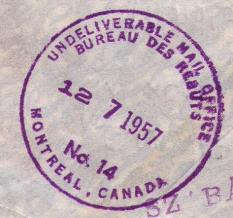