Canada's official role during the Vietnam war was to supervise treaty implementations and ceasefires. Although Canadian forces did not fight in Vietnam, thirty thousand Canadians enlisted in the U.S. military during the war period. However, many Canadians opposed the involvement of Canadian companies and the Canadian government in weapons testing and in the manufacture of arms for shipment to Vietnam. One such Canadian was Ernest "Ernie" Symons of Rocanville, Saskatchewan, who expressed his disapproval of the war on his commercial mail. The cover below was mailed on October 4, 1968 to Sears Limited, Toronto and has a total of five anti-war slogans printed on the front and back of the envelope: 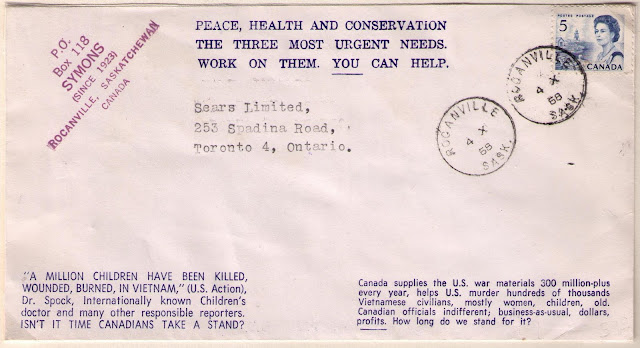 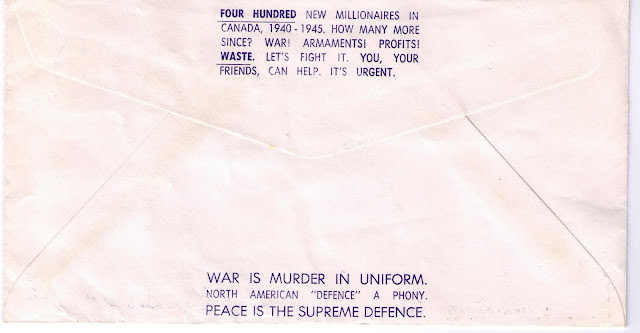 The slogans are strongly worded condemnations of war in general and of the Vietnam conflict in particular: 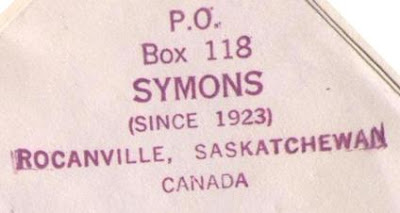 When I acquired this cover I had no idea who "Symons" was other than the fact that Symons had been in Rocanville since 1923. So, who or what was Symons? Thanks to the internet I have discovered that "Symons" was Ernie Symons , a remarkable Canadian machinist, welder, inventor and entrepreneur . 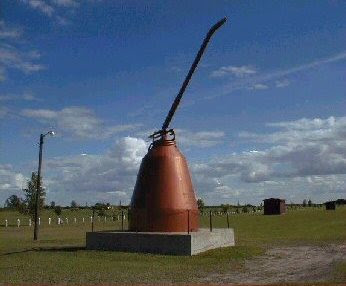 The World's Largest Oil Can is a Rocanville roadside attraction 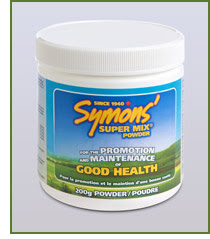 Ernie Symons came to Rocanville in 1923. In 1924 he began mass-production of an oil can that he designed for use on farm and industrial machinery. "Symons Oilers" were the best of their kind. During World War II, the oil cans were greatly in demand for the maintenance of aircraft, tanks, and other military equipment; by the end of the war, over one million had been produced at the Rocanville plant. On July 1, 1973, Rocanville honoured Ernie Symons for 50 continuous years in business: the day was proclaimed Symons Day, and a 7 meter-tall oil can was erected at the entrance to the town.

I have not found any information regarding the roots of Ernie Symons' anti-war sentiment. He certainly doesn't fit the stereotype of a 1960s war protester. Although production of the Symons oiler increased greatly during World War II, it is interesting to note that one of his slogans is critical of the Canadians who profited from the war. Perhaps a reader of this article might be able to shed some light on this.
Posted by philcovex at 10:49 PM