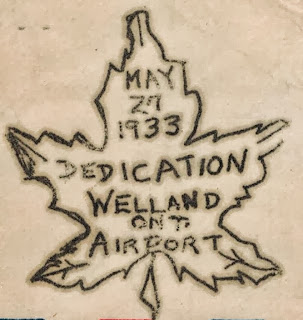 The opening of the Welland, Ontario airfield on May 27, 1933, was an occasion for celebration. It featured airplanes of the day, the famous Leavens Brothers Air Circus, airplane rides, and parachute jumps as the grand finale. Unfortunately, the day ended in disaster.

An account of the event titled "Tragic Aviation History"  by William Morgan, was published in the Welland Tribune ( June 3, 2011). Morgan's father, who was thirteen at the time,  had attended the opening and had shared his memories of that fateful day with his son. This posting would not have been possible without Mr. Morgan's excellent article.

The cover below was postmarked on May 27, 1933 the afternoon of the dedication day. 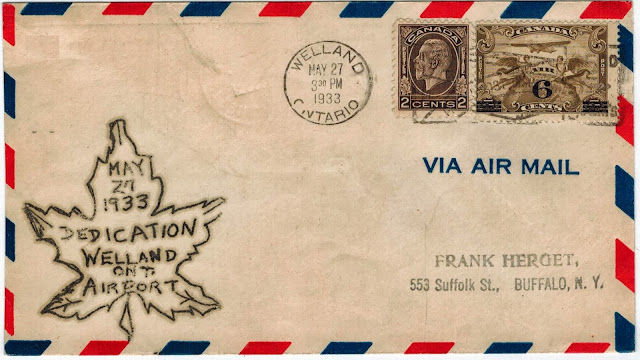 Current residents of Welland may not know that the Welland-Crowland airstrip was located in the the south-west end of the city (see map below), now the site of St. George park. 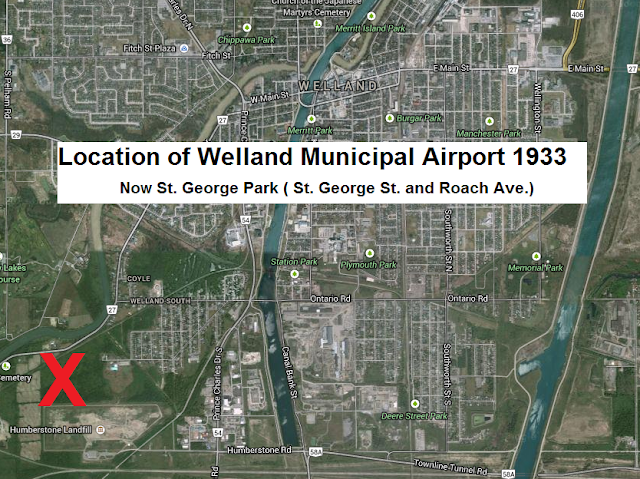 Morgan's father. like most teenagers in the 1930s, was an enthusiastic admirer of aircraft and vividly remembered the airplanes he saw:


The aircraft of the day were all there. The TravelAirs (the pride of Walter Beech of Beechcraft fame), the Alexander Eaglerocks, Curtiss JN-4 (Jenny's), Dehavilland Gypsy Moths and Consolidated Fleets. The famous Leavens Brothers Air Circus was there with their Long-wing Eaglerock, so named because the lower wing span was longer than the upper. They also had their Waco 9 and 10 as well as their Kinner-powered Pitcairn Autogyro CF-ASQ.

A Fairchild biplane was used for the parachute finale. 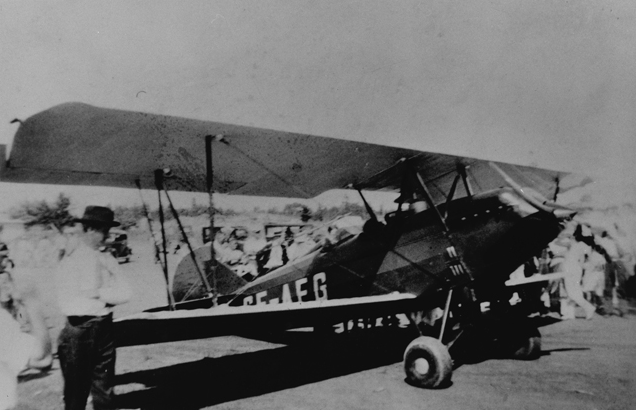 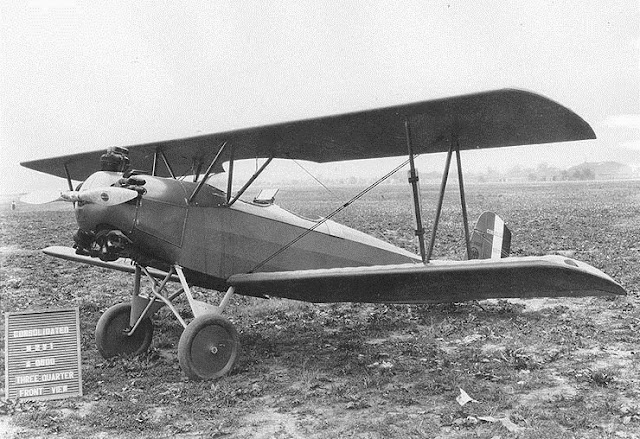 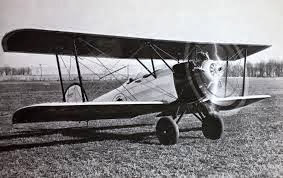 The Leavens brothers of Brockville Ontatio were barnstormers who flew across the country selling airplane rides. They brought their impressive fleet of airplanes to the Welland airport dedication. The elder Morgan said this about the Leavens Brothers:


The famous Leavens Brothers Air Circus was there with their Long-wing Eaglerock, so named because the lower wing span was longer than the upper. They also had their Waco 9 and 10 as well as their Kinner-powered Pitcairn Autogyro CF-ASQ. Along with them was their little Ford panel truck on the sides of which was painted "See your town from the air in an aeroplane -- special rate -- one cent per pound."


Photographs  shown below are from the Canadian Aviation Hall of Fame's video prepared for the induction of Leavens Aviation Inc. 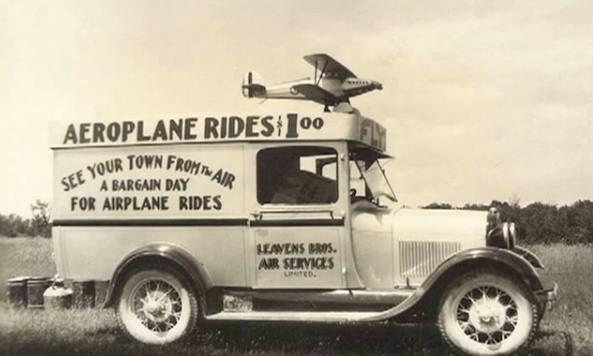 Leavens Brothers Ford panel truck advertizing airplane rides. In 1933 the price of a flight was  "one cent per pound." 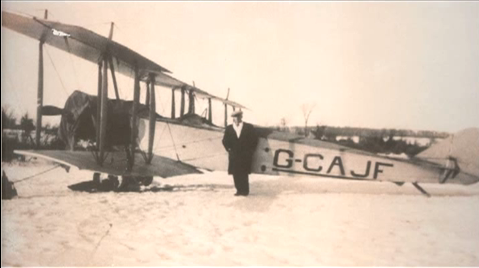 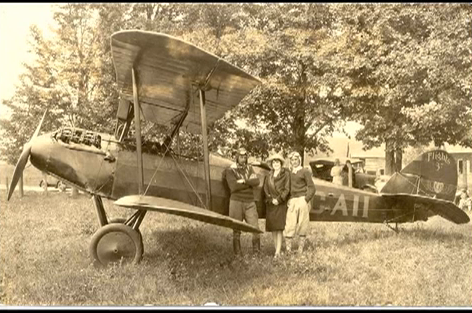 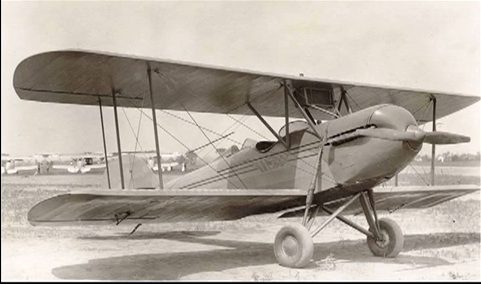 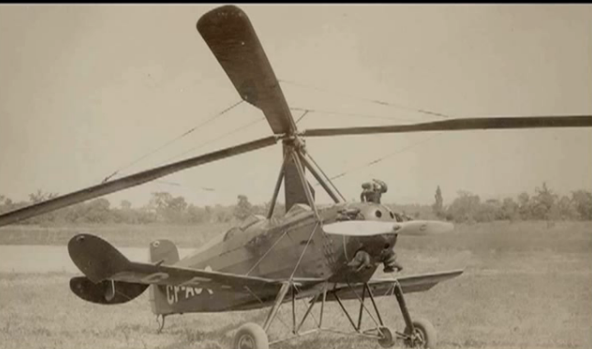 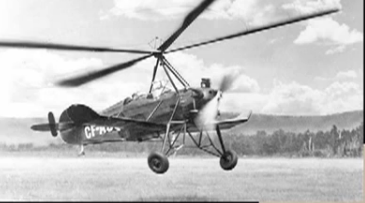 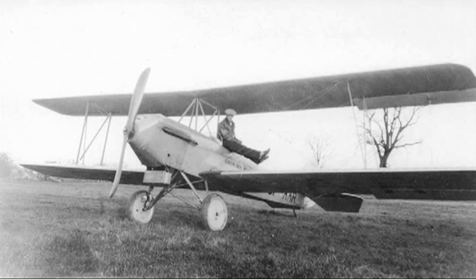 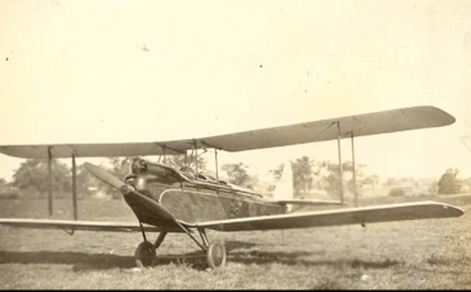 In 1933, few people had ever seen a person jump out of an airplane and parachute to the ground . Parachuting was a thrilling event which drew large crowds. Warner Brothers understood the attraction when it released  Parachute Jumper, a film starring Douglas Fairbanks Jr. 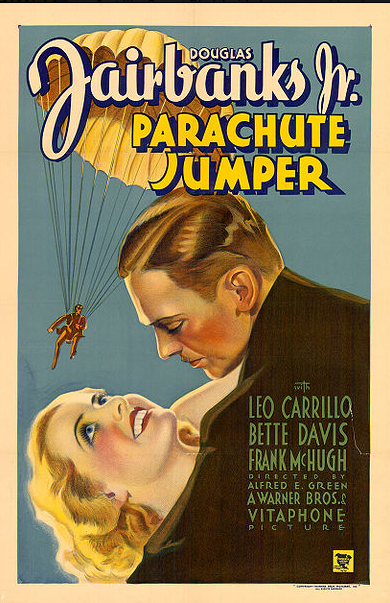 The Welland spectators were to see two jumpers on May 27, 1933 , one of whom was twenty-five year-old Elsie Storrow. Morgan provides this dramatic description of the jumps:


They [the jumpers] could barely be seen from our vantage point, suiting up and being helped into the Fairchild bi-plane. They took off and climbed slowly to their jumping altitude of 1,500 feet. All eyes were upon them as the airplane made a final turn.

A large gasp from the crowd as the first jumper left the plane. 1-2-3-4-5 and the big white canopy blossomed open and he floated gently downward. A few seconds later, another gasp as Elsie left the craft, 1-2-3-4- 5-8-10-15. Something must be wrong. She hurtled down at a terrifying rate until the 'chute streamed out behind her but the life-saving canopy did not appear. Elsie disappeared into the tree tops at the far end of the field. The Electro-Metals van roared to life, swung onto the airstrip and raced towards the woods followed by a huge mass of spectators, oblivious to the aircraft overhead on landing approach. The loudspeaker shouted appeals to clear the field, to no avail.

Elsie Storrow's body was recovered by the Provincial Police, and she was buried at the Holy Cross Cemetery in Welland. Her headstone reads : "Elsie Storrow -- Died as a result of a parachute descent -- May 27, 1933."

Parachuting in the 1930s was a dangerous activity. A few months after Ms. Storrow's death, Joe Wilson fell to his death in front of a large crowd at the Chicago World Fair on July 4, 1933. 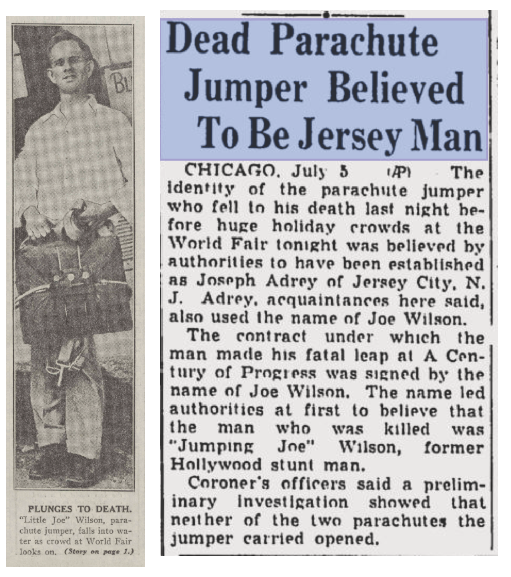 According to Morgan. the airfield did not see long service:


Apart from an occasional "barnstormer" and use by the old Welland Aeromodelers flying models, the airfield blended back into its surroundings and became overgrown with scrub. A victim of the times. After all it was the early '30s, the height of the Great Depression.

Posted by philcovex at 9:40 PM