The Toronto Maple Leafs were a minor league baseball club that played from 1896 to 1967. 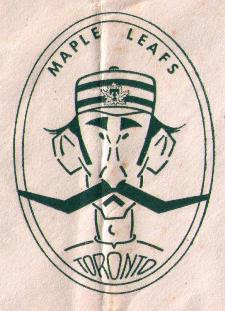 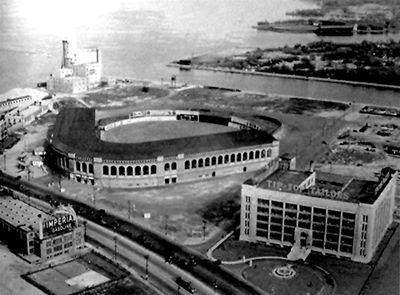 Maple Leaf Stadium (opened 1927) was located at the corner of Bathurst and Lakeshore Blvd.


The cover below from the Toronto Maple Leaf Baseball Club was mailed in 1950 to the Postmaster General, Canberra, Australia:


In 1950, the AAA International League Maple Leafs had a 60 and 90 season. On May 7, 1950, the Maple Leafs made history by playing in Toronto's first ever sporting evening to be played on a Sunday. Almost 18,000 fans watched the home team lose both games of a double header. 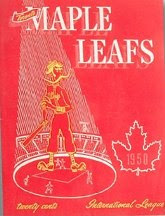 One of the notable players on the Maple Leafs 1950 squad was 21 year-old right-handed pitcher Steve Ridzik who went on to play 12 major league seasons finishing his career with a 39-38 record.


The team was sold the following year to Jack Kent Cook. Under Cooke's ownership, the Leafs were one of the top franchises of the International League, leading the league in attendance every year from 1952–1956. In 1960, the pennant-winning Leafs won 100 games with a league-record 32 shutouts. Future Baseball Hall of Fame manager Sparky Anderson joined the team in 1960 as a middle infielder. In 1964, at the age of 30, Anderson accepted Cooke's offer to manage the Leafs. Cooke sold the team in 1964. Despite consecutive championship seasons in 1965 and 1966 under another future Baseball Hall of Fame manager Dick Williams, attendance was dropping and team was losing money. At the end of the 1967 season moved to Louisville, Kentucky. Toronto was without professional baseball from 1968–1976.

Professional baseball returned to Toronto in 1977 with the Blue Jays, an American League expansion team. Roy Hartsfield, pictured on the Texaco advertising card below, was the team's first manager. The card was mailed from Dunedin, Florida, "winter home of the Toronto Blue Jays", a few days before the first pitch was to be thrown at Exhibition Stadium. 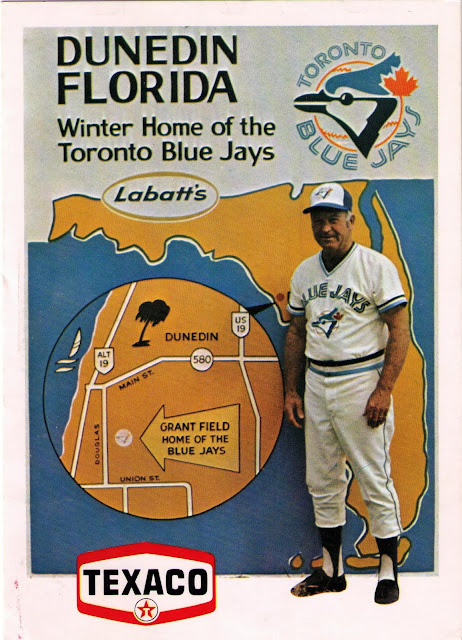 Roy Hartsfield was a successful manager at top levels of minor league baseball before he was hired as the first Blue Jays' manager. Hartsfield managed the Jays from 1977 to 1979. 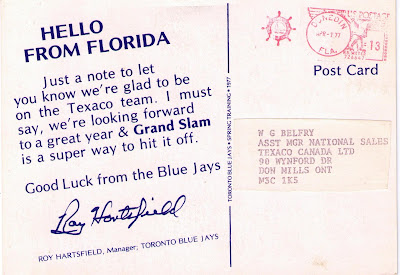 The Blue Jays played their first game on April 7, 1977, against the Chicago White Sox ,winning 9-5. Fans will never forget the minor snowstorm that began prior to the game. 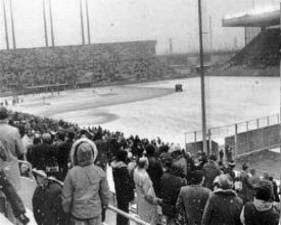 The cover below contained ticket order information for the 1978 season. 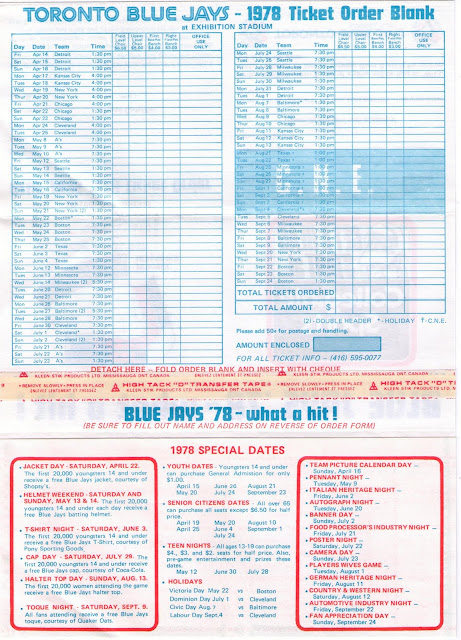 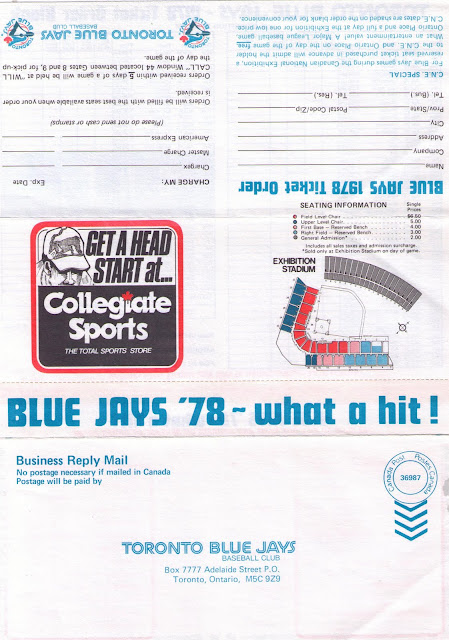 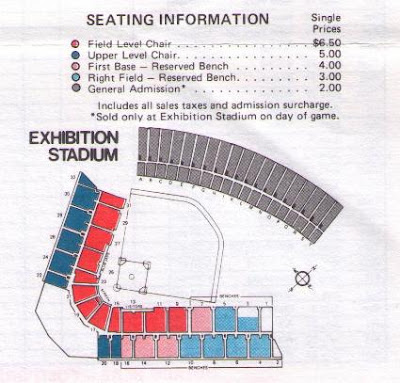 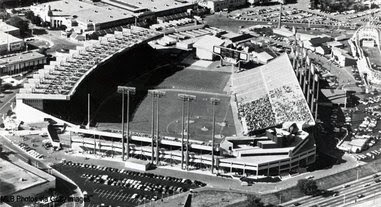 In 1989, the Blue Jays moved from Exhibition stadium to Skydome, a park with a retractable roof. The next five years would be the most successful in Jays history, culminating in World Series victories in 1992 and 1993.

Canada Post helped celebrate the 25th anniversary of the Blue Jays with the release of a 47 cent commemorative stamp on April 9, 2001. 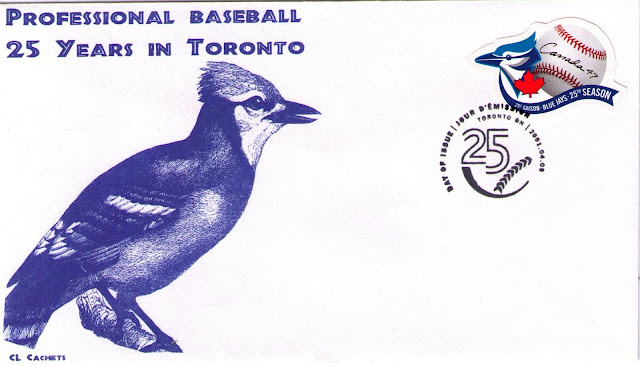 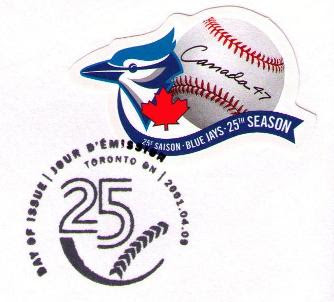 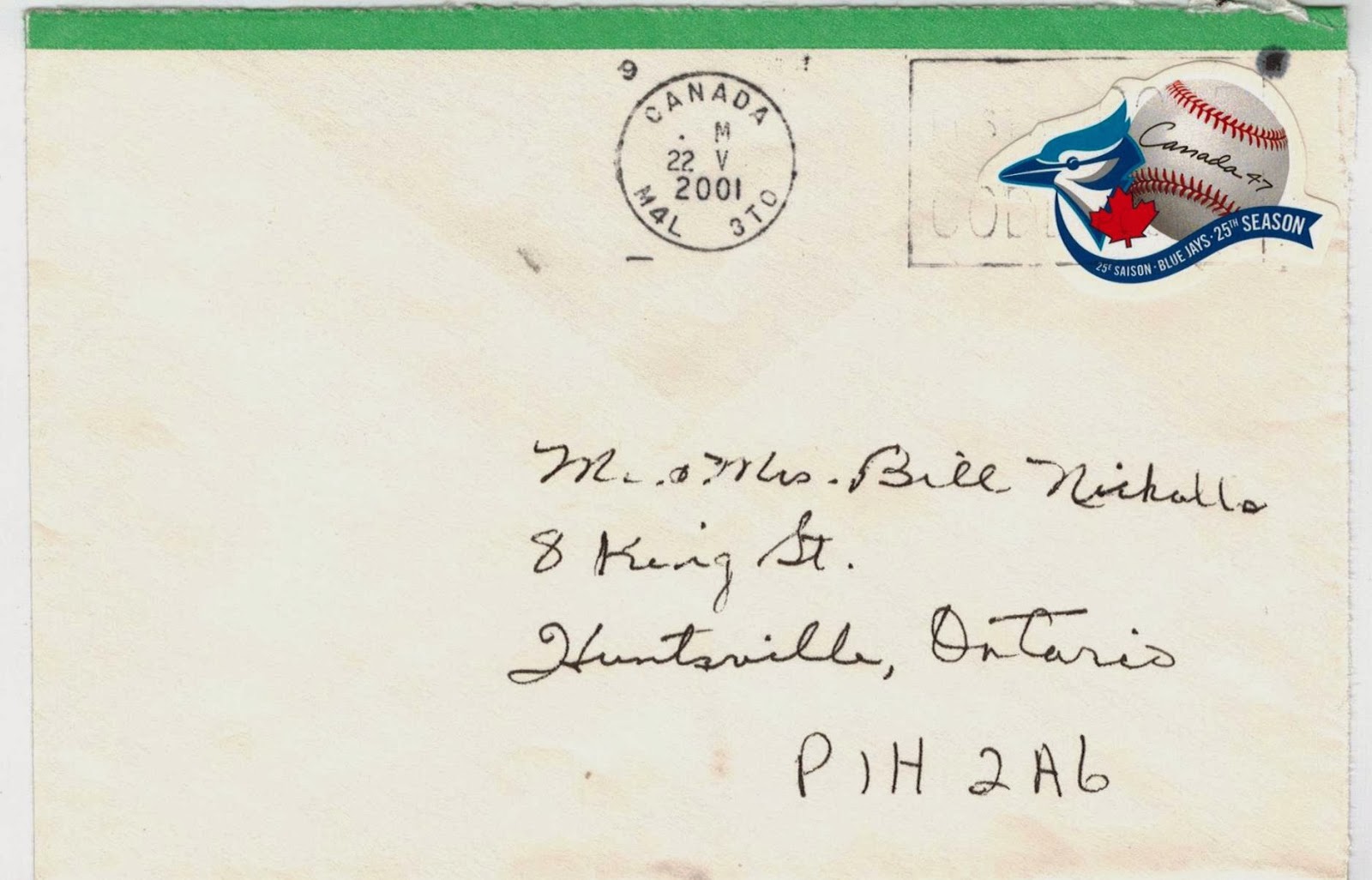 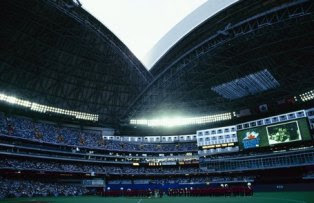 The 1991 Major League Baseball All-Star Game was held on July 9, 1991 at Skydome, Toronto. The American League defeated the National League 4-2. 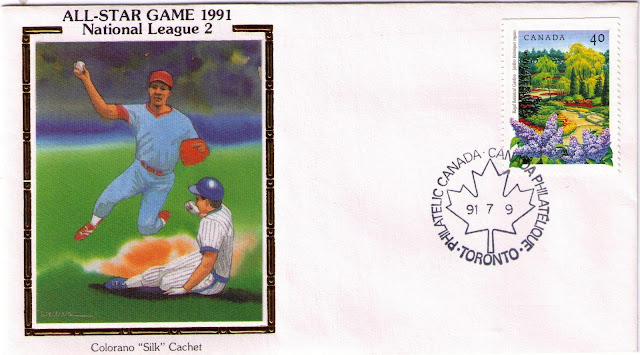 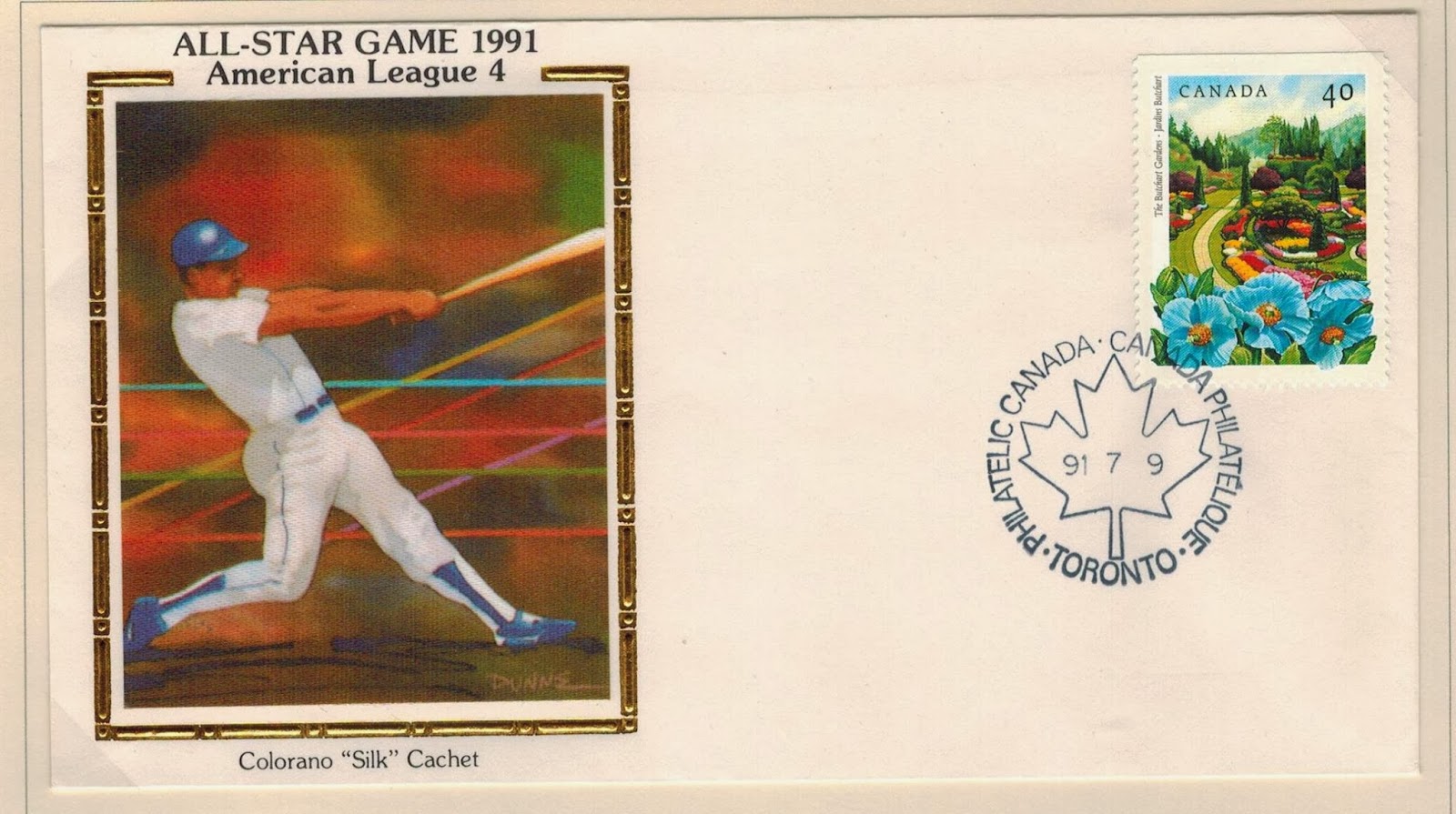 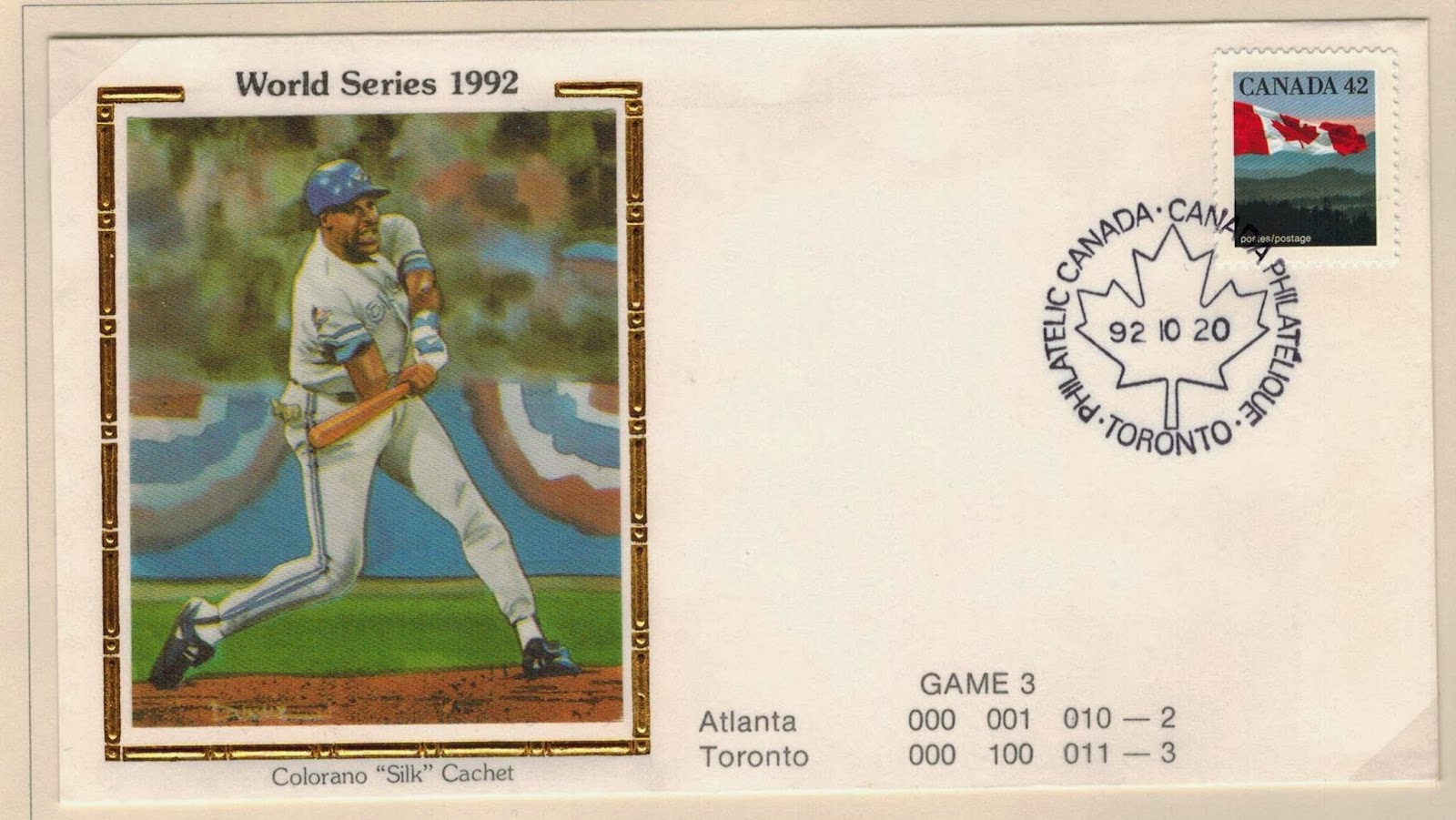 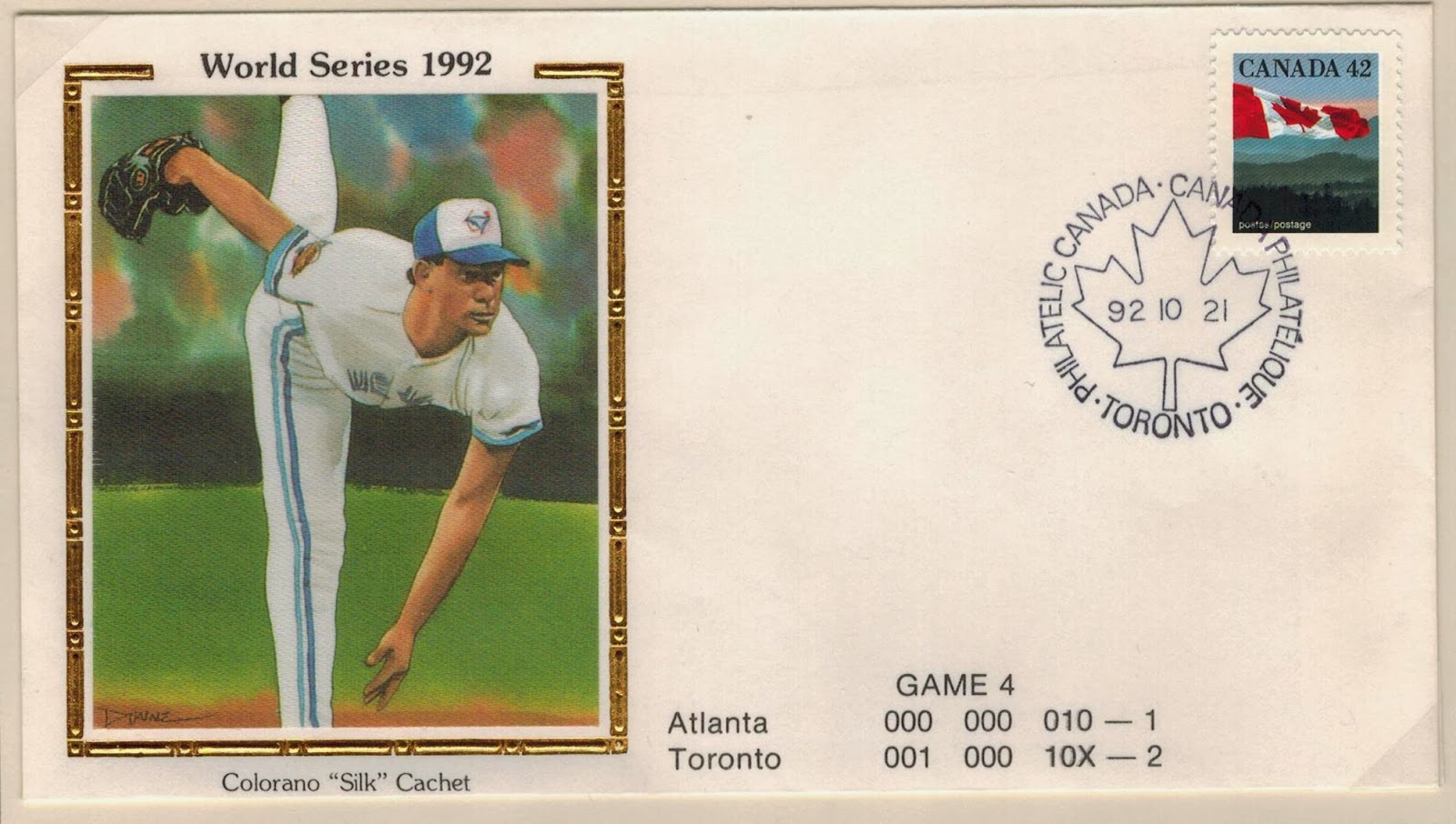 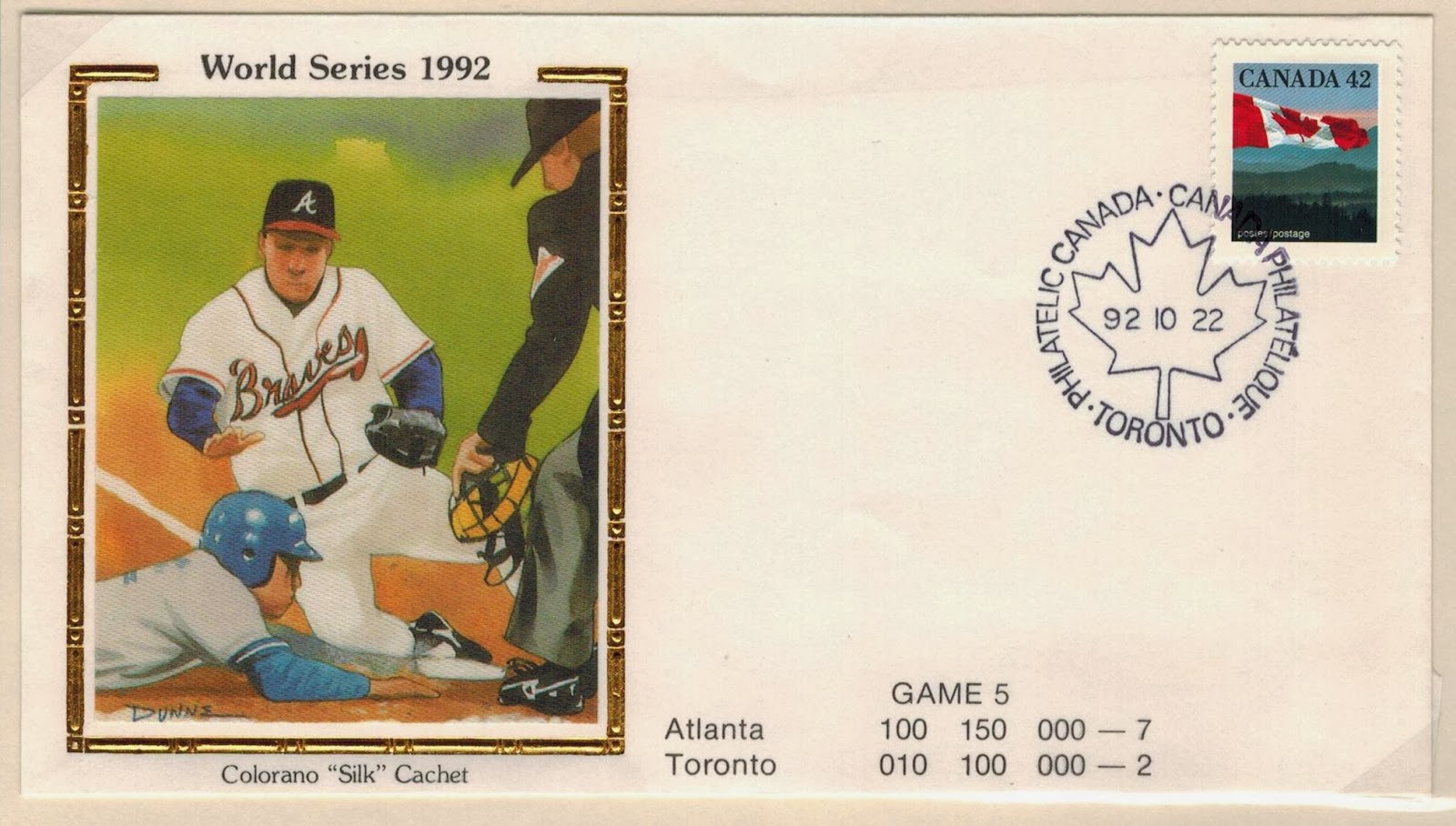 The Blue Jays won the final game of the World Series 4-2 in eleven innings in Atlanta on October 24, 1992.

The Blue Jays triumphed again in 1993, beating the Philadelphia Phillies 4 games to 2.  With Toronto ahead three games to two in the Series, Joe Carter hit a game-winning three-run home run in the bottom of the ninth inning of Game 6 to win the series for Toronto. 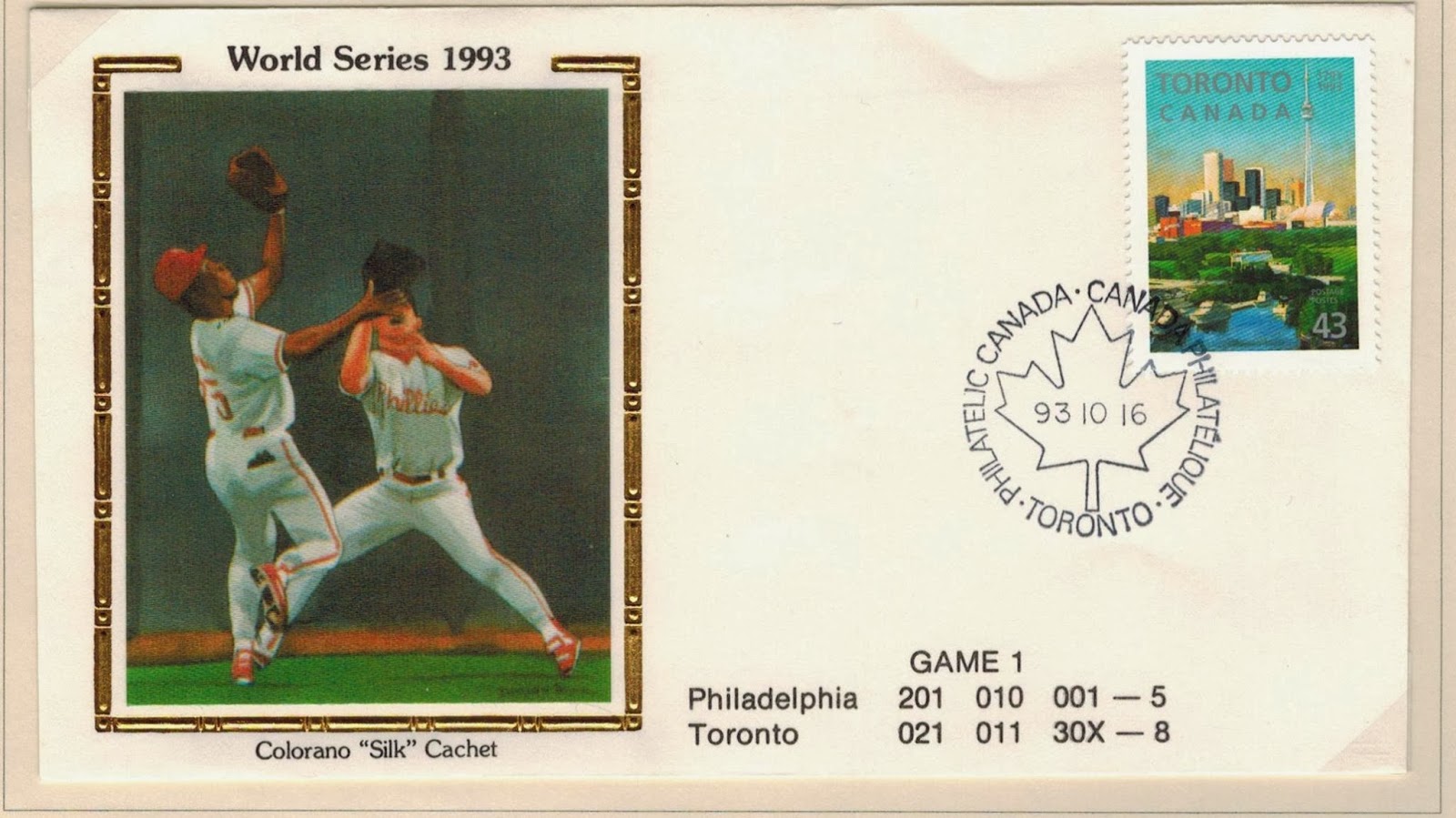 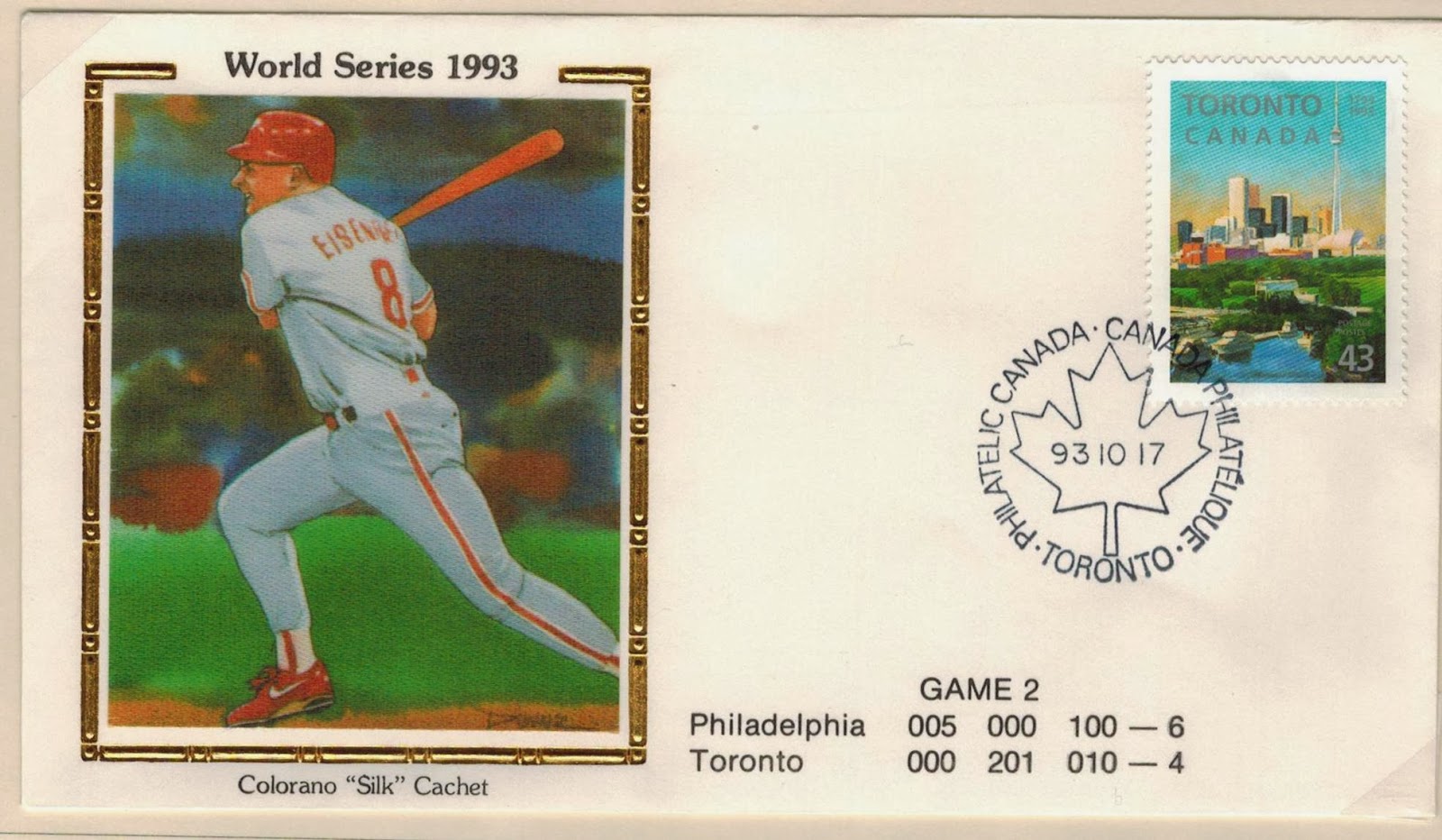 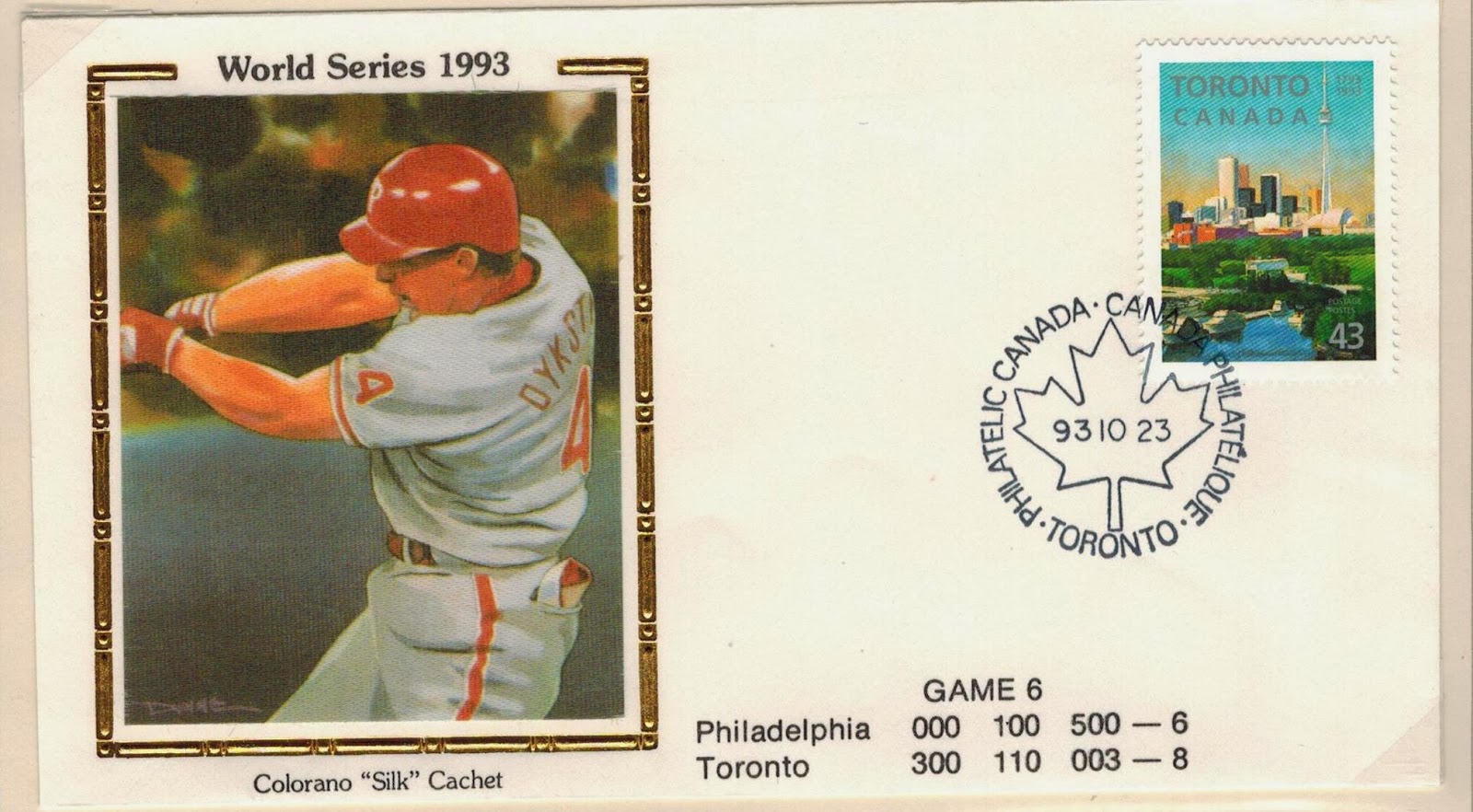 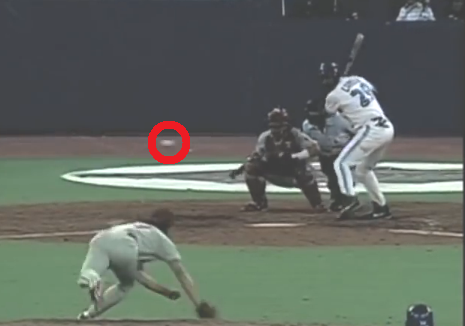 Joe Carter looking at the incoming ball before hitting his amazing walk-off home run in the bottom of the ninth, October 23, 1993.