2008 Guide Dogs and Montreal Association for the Blind 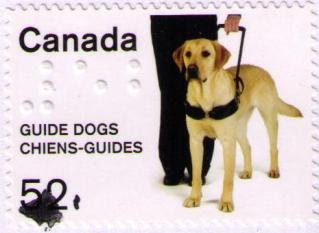 The Guide Dog stamp features "Luke" who was in training at the Lions Club of Canada facility in Oakville when this photo was taken. The 52 cent denomination of the stamp was embossed in Braille.

The Lions Club was celebrating the 25th year of its guide dog program. 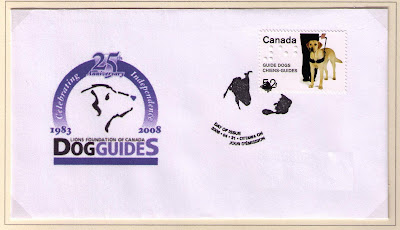 Canadian Guide Dogs for the Blind

The Canadian Guide Dogs for the Blind was founded in 1984 by Jane Thornton. 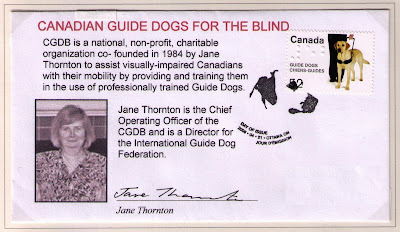 VoicePrint is a national reading service that broadcasts news and information to Canadians who cannot independently access newspapers and magazines. VoicePrint picture stamps printed by Canada Post have been sold by the organization to raise funds. 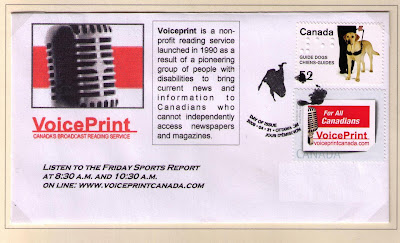 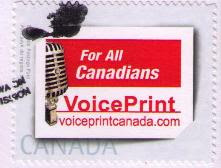 2. Montreal Association for the Blind

The commemorative envelope below was autographed by Thomas Davis, President of the MAB-Mackey Rehabilitation Centre. 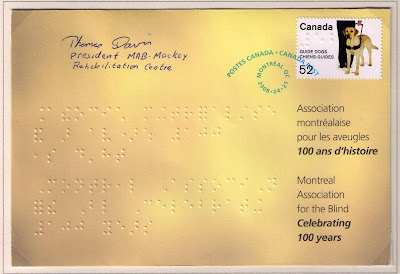 The back of the envelope features a photograph of MAB founder Philip E. Layton and a brief description of the founding of the MAB. 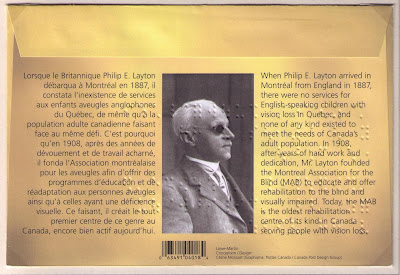 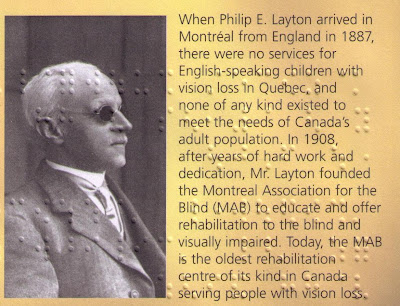 "When Philip E. Layton arrived in Montreal from England in 1887, there were not services for English-speaking children with vision loss in Quebec, and none of any kind existed to meet the needs of Canada's adult population. In 1908, after years of hard work and dedication, Mr. Layton founded the Montreal Association for the Blind (MAB) to educate and offer rehabilitation to the blind and visually impaired. Today, the MAB is the oldest rehabilitation centre of its kind in Canada serving people with vision loss."


The Laytons
Philip Layton's descendants have dedicated themselves to political service.

Gilbert Layton (1899-1961), Philip's son, was a businessman and politician in Quebec. Gilbert Layton was elected to Quebec's legislative assembly in 1936 as a member of the Union Nationale. He served as minister without portfolio in the Maurice Duplessis government until he resigned in 1939 to protest the Quebec government's opposition to conscription in World War II.

Robert "Bob" Layton (1925 – 2002), Gilbert Layton's son, was elected to the Federal Parliament in the 1984 election as the Progressive Conservative member for the Quebec riding of Lachine. He was elected in the general elections of 1984 and 1988, and served as Minister of States for Mines in the federal cabinet of Brian Mulroney from 1984 to 1986.

Philip Layton's great grandson, Jack Layton is national leader of the New Democratic Party. Jack Layton (b. 1950) has dedicated himself to public service throughout his life. He served on Toronto City Council, also serving at times during that period as acting mayor and deputy mayor of Toronto. He became federal NDP leader in 2003. 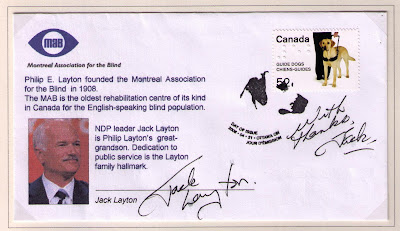 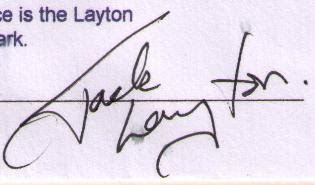 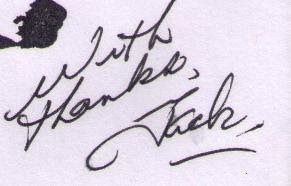 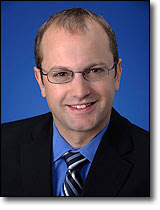 Mike Layton, son of Jack Layton, was elected to Toronto City Council in the 2010 city council election. Layton had worked for Environmental Defence a national environmental charity that fights to protect the environment and human health and reduce Canada’s contributions to climate change.
Posted by philcovex at 7:34 AM