The 1973 cover shown below addressed from Melbourne, Australia to Downside Cobham, England is a postage due collector's gem. In this article I provide an explanation of the various postal markings applied by the Australian, British, and Canadian post offices. 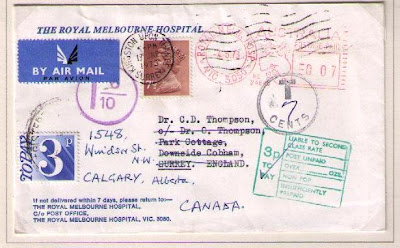 The fraction is explained as follows:

(An explanation of the tax fraction system can be found in my earlier article. Click HERE)

The British post office used the Australian tax fraction to calculate the amount due in British currency. The British international letter rate (5p) was multiplied by the tax fraction (6/10): 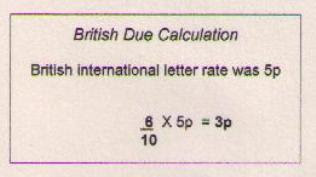 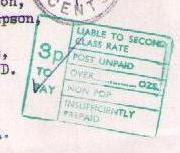 The amount due was paid:

The Australian and British tax assessments were correct.

1) The letter was re-posted by air mail to Canada:

2) An air mail etiquette was applied and a British 7 1/2 p stamp affixed:

Upon arrival in Canada, this properly franked air mail letter was incorrectly taxed 7 cents by the Canadian post office:

I have no idea how the Canadian postal official arrived at 7 cents; however, had the error not been made, the cover wouldn't be as interesting.

Posted by philcovex at 4:21 AM