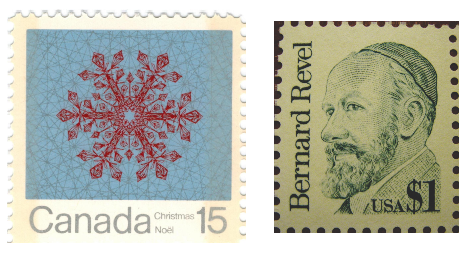 The 1971 Canadian Christmas stamp shown above and the 1986 U.S. $1.00 stamp honouring Jewish educator Bertrand Revel share a common design element : a hidden Star of David, a symbol of Jewish identity. While the star on the U.S. stamp was found shortly after the stamp was issued, the hidden star in the Canadian stamp is revealed for the first time in this posting.

In 1986, the United States Postal Service issued a $1.00 stamp to commemorate the birth centennial of Bernard Revel. One year after the stamp was released it was revealed  that a  tiny six-pointed a Star of David had been etched in Revel's beard. An employee of the Bureau of Engraving and Printing  had secretly altered the master die of the stamp. However, the Revel stamp was not recalled because it had been distributed nation-wide. 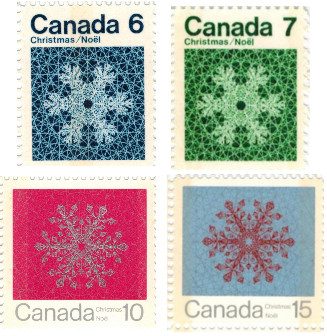 
Snowflake designs reproduced on the 1971 Christmas issues are creations of Miss Lisl Levinsohn, of Toronto, whose intricate pen drawings are considered by many among the best of the kind in the world. In reproducing the snowflake designs, the contemporary style and fine delineation of line have been preserved by special attention to printing techniques.

The release continued with a brief biography of the artist:


Responding to the potential serenity of life on the shores of Lake Ontario, Miss Levinsohn emigrated to Canada in 1964 from the United States where she had lived after leaving her native Vienna, Austria, as a young child in 1937. Prior to adopting Canada as her home, professional figure skating, advertising, drafting, designing and mathematics had occupied her time, principally in the New York area. Although youthful aspirations pointed her to a career in writing, two years after leaving the United States she began to produce the drawings, frequently consisting of some sixty-seven thousand carefully plotted lines, which have since gained international recognition.


An acquaintance of  the artist  has informed me that Ms. Levinsohn found it ironic that she was asked to design a Christmas stamp given her Jewish background and deliberately incorporated a six-pointed star in her drawings.  The star can be seen in the center of the snowflake of the 10c and 15c stamps but not the centers of the 6c and 7c stamps.

Strictly speaking, Ms. Levinsohn's star in the 10c and 15c stamps is not a Star of David since she drew a six-pointed star rather than a hexagram. A  hexagram would have been been easily discovered as was the Star of David in the Revel stamp. Instead, Levinsohn's message of irony has been hidden for over thirty years.
Posted by philcovex at 8:24 AM