In 1893, many Canadian post offices were supplied with a new postmark to obliterate stamps called the "squared circle".  The cancels, in use for about ten years,  consisted of horizontal bars with a circular centre containing the date and place of posting. Squared circles have been a popular area of philatelic specialization for many years.. Organizers of the 1967 Belleville stamp show QUINPEX produced a squared circle to mark the event held on October 14.. Since the cancellation was not supplied by the Canada Post Office it falls under the category of "cinderella" cancellation. Nevertheless, it's a great Centennial Year philatelic souvenir. 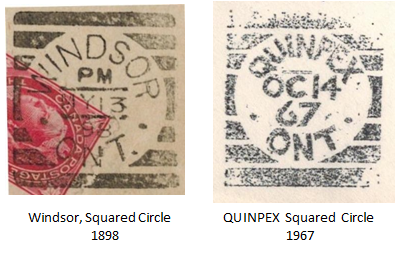 The QUINPEX squared circle was applied to the  first day cover below.  However, it is not possible to establish when the marking was applied.