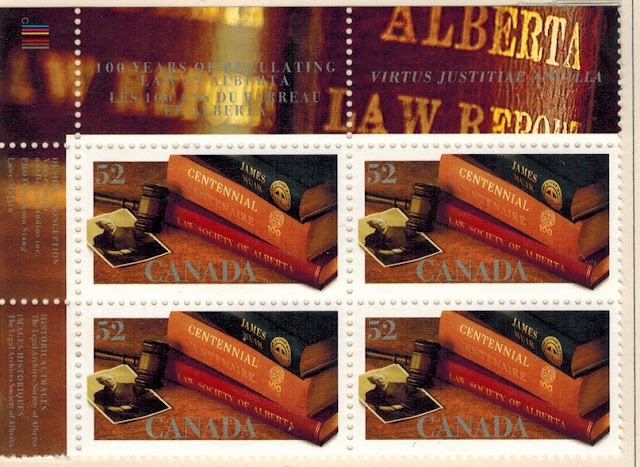 The Law Society of Alberta (LSA) was created in 1907 pursuant to the Legal Professions Act. The Society's mandate is to serve the public interest by promoting a high standard of legal services and professional conduct. To commemorate the LSA's centenary, Canada Post issued a single 52 cent stamp on September 13, 2003. 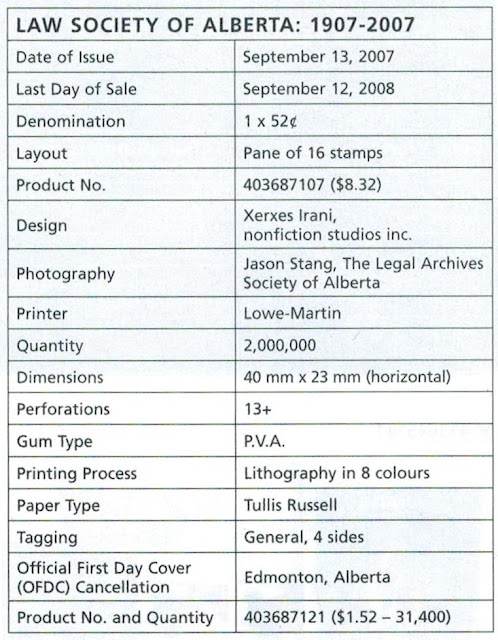 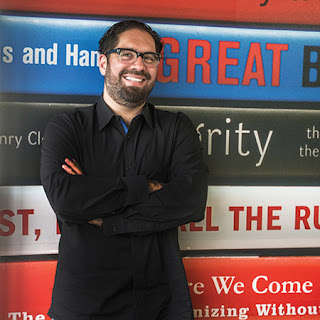 Mr. Irani provided insight into his design at the First Day Ceremonies held in Edmonton on September 13, 2007. Mr. Irani kindly provided me with a copy of his address which is transcribed below. 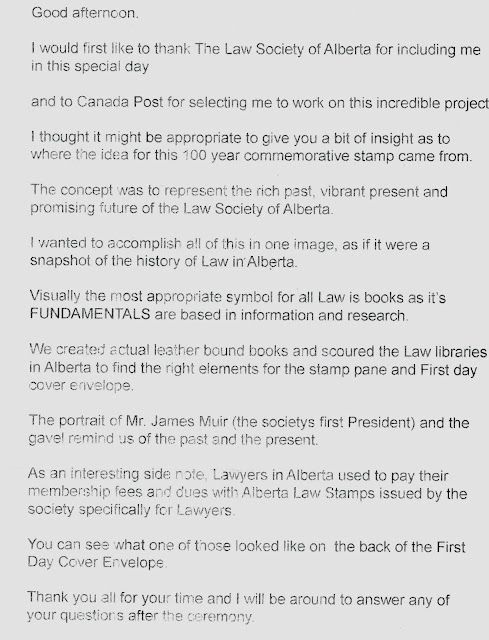 I would first like to thank the Law Society of Alberta for including me in this special day and to Canada Post for selecting me to work on this incredible project.

I thought it might be appropriate to give you a bit of insight as to where the idea for this 100 year commemorative stamp came from.

The concept was to represent the rich past, vibrant present and promising future of the Law Society of Alberta.

I wanted to accomplish all of this in one image, as if it were a snapshot of the history of Law in Alberta.

Visually the most appropriate symbol for all Law is books as its FUNDAMENTALS are based in information and research.

We created actual leather bound books and scoured the Law libraries in Alberta to find the right elements for the stamp pane and First day cover envelope.

The portrait of Mr. James Muir (the society's first President) and the gavel remind us of the past and the promising future of the Law Society of Alberta.

As an interesting side note, Lawyers in Alberta used to pay their membership fees and dues with Alberta Law Stamps issued by the society specially for lawyers.

You can see what one of those looked like on the back of the First Day Cover envelope.

Thank you for your time and I will be around to answer any of your questions after the ceremony. 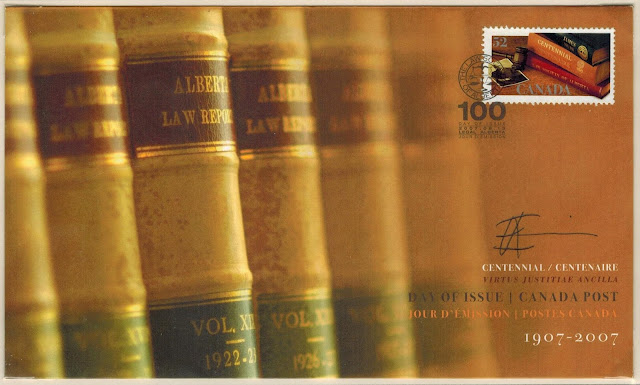 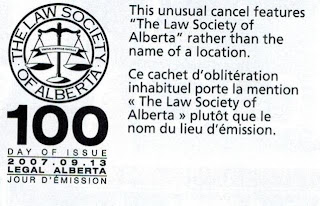 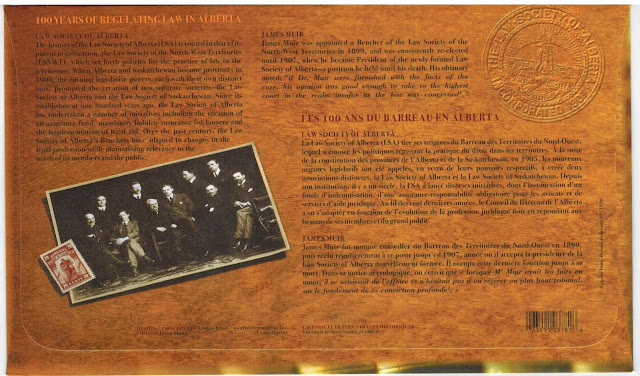 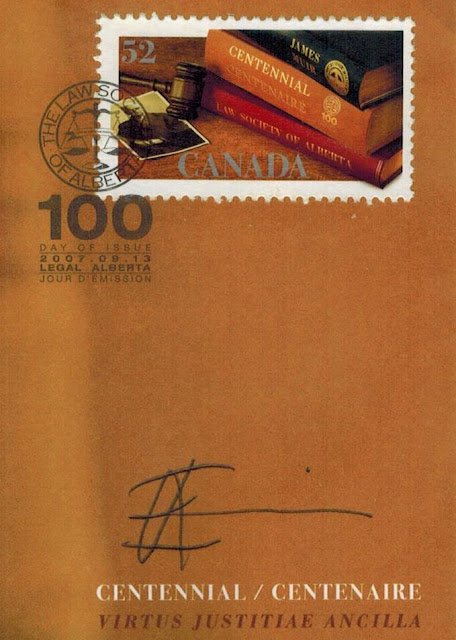 I prepared the covers shown below. 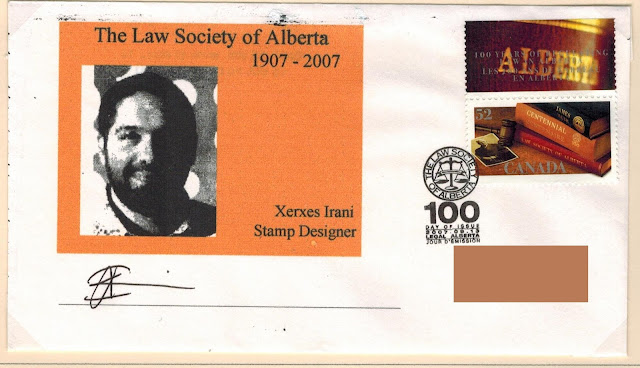 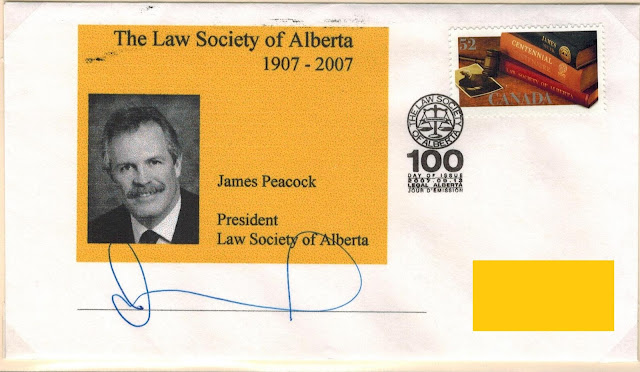 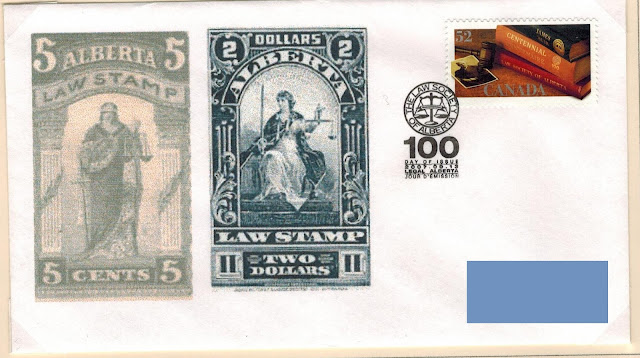 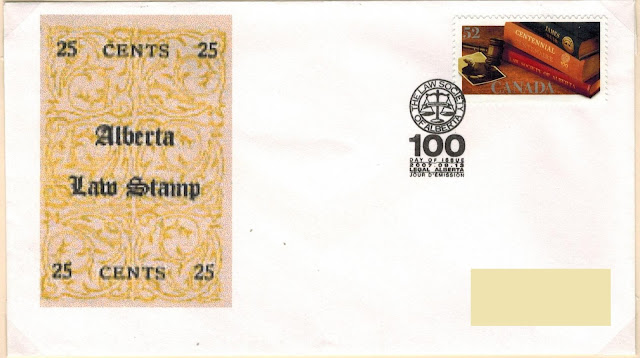 Many thanks to Mr. Xerxes Irani for his generous assistance.