In 1975, Canada Post Office introduced a machine cancellation  in Toronto which  did not identify the post office by name but only by its postal code:

At that time Canada  Post Office was starting to consolidate mail processing at central locations. Mail from several post offices was transported to mechanized plants for cancelling and sorting. Instead of providing a geographical location of the processing plant in the machine postmark,  a practice carried out at United States facilities, Canada Post Office decided to  replace the mail plant's city name with the facility's postal code on the machine cancellation hub.

When first introduced, the loss of city identifiers in postmarks was unpopular among postal historians. Peter Wiedemann of the Postal History Society of Ontario, an early critic of the  nameless postal code  postmarks,  called them "idiot cancels". Today, almost forty years later, about two dozen processing plants handle most of Canada's mail and use postal code cancellations to postmark letters.

This post shows  the various types of postal code machine cancellations in use at processing centres and post offices from 1975 to the 2000s. (The current ink jet spray cancellations are also nameless cancellations but these postmarks have been described in an earlier posting and not included here.)

This article is organized as follows:

The first Postal Code cancellations to appear were those used on  Pitney-Bowes cancellation machines.The hub reads "POSTES CANADA POST" at the top of the circle with the postal code of the mail facility at the bottom of the circle. Hubs are 22 mm in diameter.

The seven-wavy line obliterators were only used on the Pitney-Bowes cancellers. 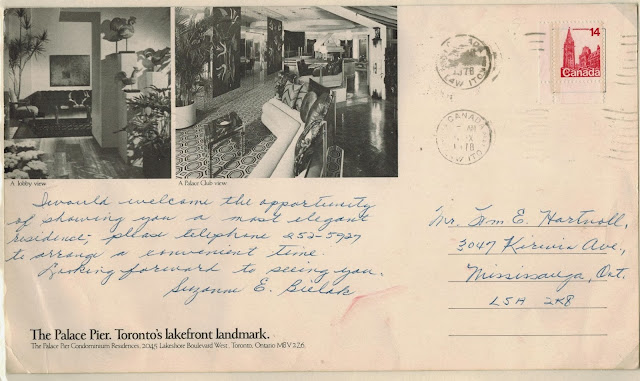 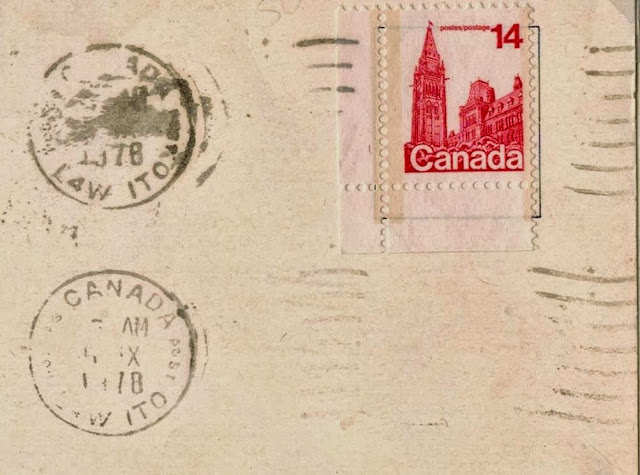 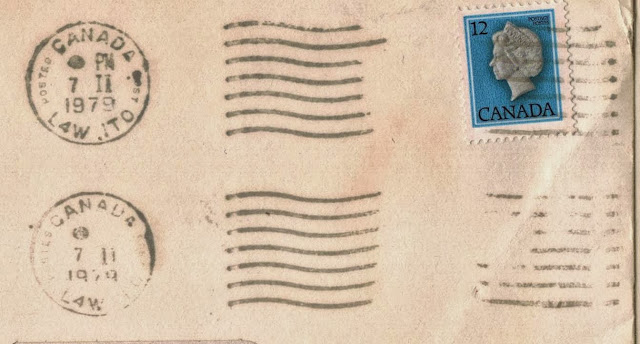 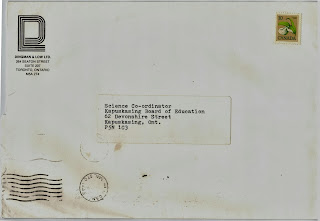 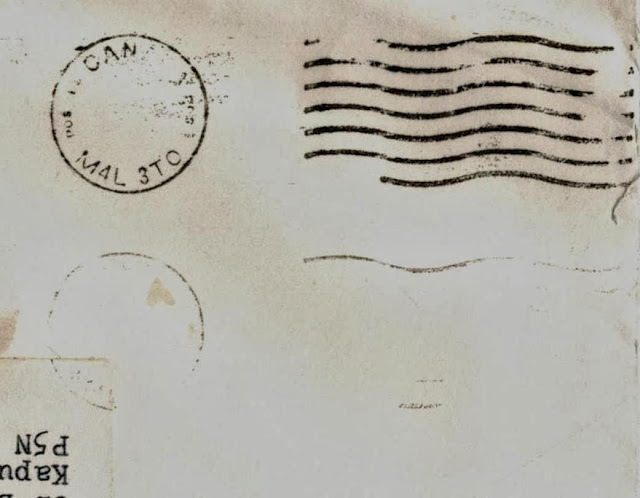 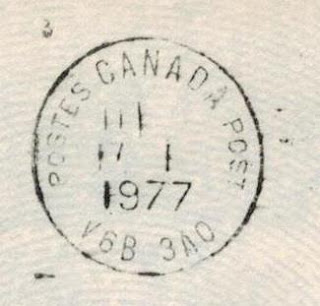 The Toshiba CFS machines, introduced in 1975, could process 20,000 letters per hour. The canceller hub reads "POSTES CANADA POST" at the top of the circle with the postal code of the mail facility at the bottom of the circle. Hubs are 20 mm in diameter.

As with the earlier Pitney-Bowes RFCs (Raoid Facers Cancellers), the postage stamp on an envelope is located by the use of photelectric cells, and through the use of a series of belts, all envelopes are fed into the cancelling equipment inverted. Unlike the earlier equipment, the stamps are located in one of two positions, in the front (or lead) position or the back (or trail) position. The machine numbers appear on the hub in the upper left hand corner. The trail hub is identified by a small horizontal bar to the lower left of the hub.

The lead and trail hubs for M1P 4T0 (Toronto) are shown here:

An Olympic slogan was used by some offices in 1992. 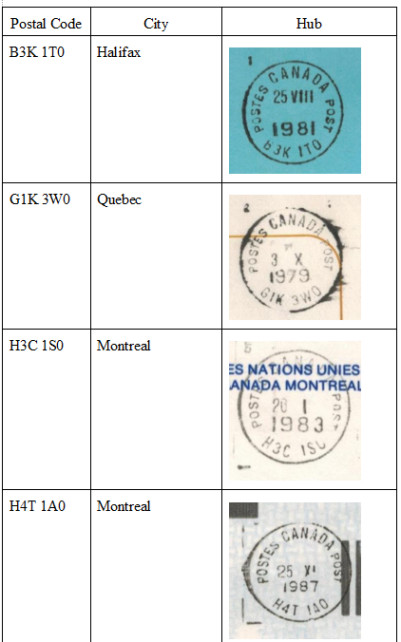 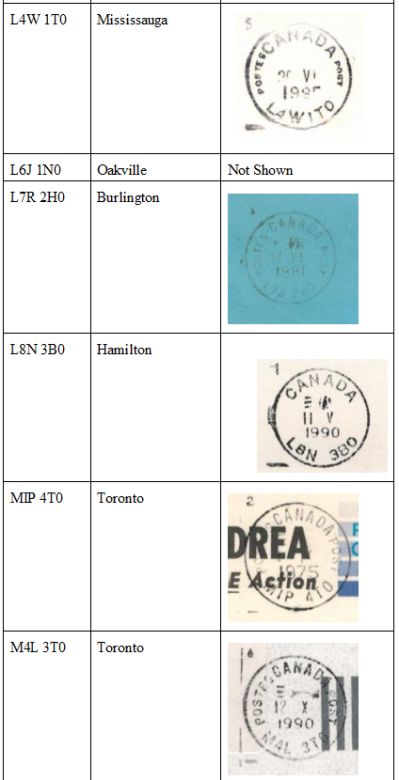 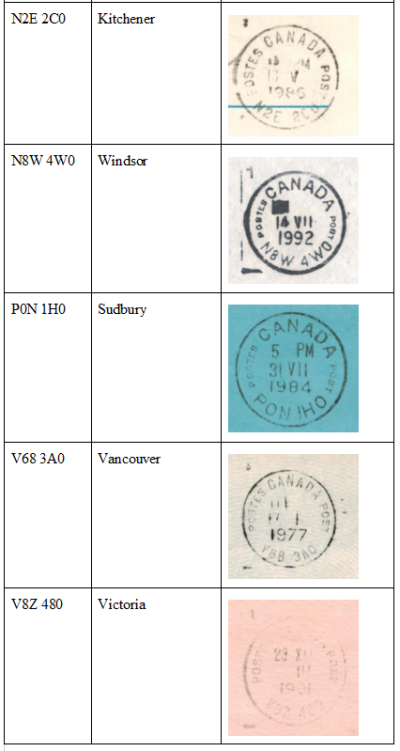 b) Toshiba "CANADA" and Postal Code

In the early 1990s Toshiba cancelling hubs which read "CANADA" at the top of the hub instead of "POSTES CANADA POST" were introduced. In addition to the "Postal Code/ Code Postal" slogan obliterators, traditional slogan cancellation dealing with events and promotions were used.

The Klussendorf machine cancellations have been discussed in an earlier posting. Most Klussendorf hubs identify the name of the post office since these machines were distributed to small post offices.

The cancellation used at Knowlton, Quebec stands out because the dater does not have the town name nor the province. Instead, at the top of the dater is "Canada" replacing the post office name and at the bottom, where most Klussendorf hubs have the provincial or territorial abbreviation, is Knowlton post office's  postal code J0E 1V0 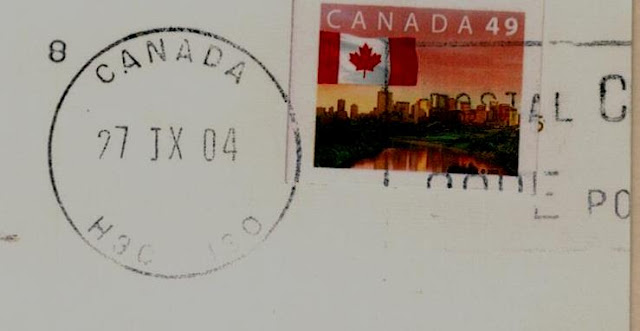 Cancellation machines can be identified by measuring hub diameters. 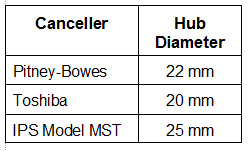 In 1992 Canada Post introduced Optical Character Reader machines which were programmed to read the postal code on letters and apply appropriate bar codes representing the postal code.  The OCRs were equipped with Inkjet spray-on printers  to cancel mail processed by the OCR.

It was not uncommon for spray cancels to be applied overtop Toshiba postmarks. Letters that first went through the Toshiba CFC received a Toshiba cancel then when the letters passed through the OCR machine  an ink jet spray cancel was applied.
('Spray-On Postmarks", Dale Speirs, PHSC Journal 114, June 2003)