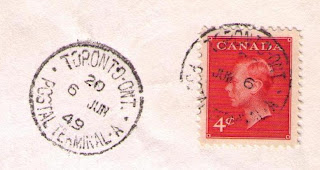 
In a previous post, the difficulties associated with the 1949 King George VI definitive issue were discussed. The initial printing consisted of stamps lacking the words "Poste/Postage" in the design. Scheduled to be issued June 6, 1949, to commemorate the King's birthday, the Canada Post Office withheld the release of the stamps. Instead, a revised set was designed and printed with the words "Poste/ Postage. The revised set was issued on November 19, 1949. The original stamps without the words "Poste/Postage" were released without fanfare in early 1950. The cover below is of special interest because it is a first day cover of the stamp which should not have been sold on June 6, 1949. 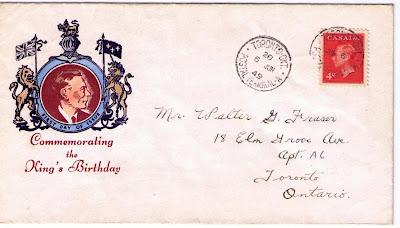 A premature first day cover of the unrevised 4 cent 1949 definitive stamp, postmarked at Toronto, Postal Terminal "A", on June 6, 1949, the day the stamp was originally scheduled to be released.

This is the first such cover seen by the author. I would appreciate information about the above cover and would like to see other June 6, 1949 covers. Please contact philcovex@gmail.com.
Posted by philcovex at 7:41 AM