This post looks at two post cards mailed from Canada to Belgium at the turn of the 19th century.
The first post card, shown below, was prepaid correctly at the 2 cents UPU post card rate. 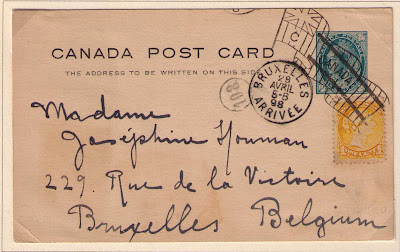 
The second card was underpaid 1 cent and taxed by the Canadian and Belgian Post Offices.The deficient postage on short paid post cards to Universal Postal Union countries was calculated in centimes of the Latin Monetary Union. Several European countries maintained their currencies at par with the French franc which was based on the gold standard. Belgium was a member of the Latin Monetary Union. 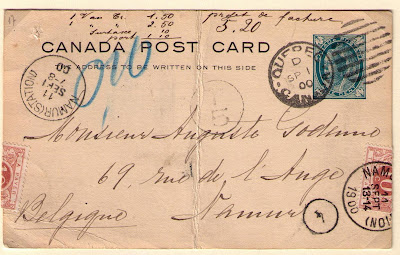 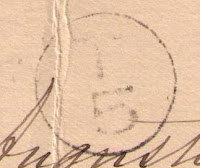 According to the UPU rules, the despatching country marked the single deficiency due in centimes. The conversion rate was 1 Canadian cent = 5 centimes. The T 5 handstamp indicated that the amount underpaid was 5 centimes.

The Exchange Office receiving the underpaid item doubled the amount shortpaid. That amount would be converted from centimes to local currency if the country of destinations's currency was not at par with the French franc. In this case no conversion was necessary and the amount to be collected was 10 centimes, double the deficiency. 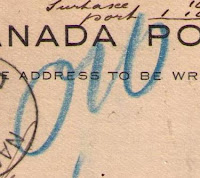 The Belgian 10 centimes postage due was applied in an interesting fashion. The Belgian Post Office folded the card vertically down the middle and sealed the halves with the postage due stamp. This prevented the addressee from reading the contents of the card until the taxe was collected.

Posted by philcovex at 9:43 PM