The  Air Letter shown below was sent from Jack Sissons,H-Block, HMCS Scotian (Halifax dockyard), July 29, 1945, to a member of the U.S. 539th Amphibious Tractor Batallion which was located in the Philippines at that time. The air letter is loaded with news. There is a personal account of the Halifax explosions of July 18 -19, 1945, and a reference to the VE-Day riot in Halifax. On top of that, as the letter was being written, radio news reported that an airplane had crashed into the Empire State building. 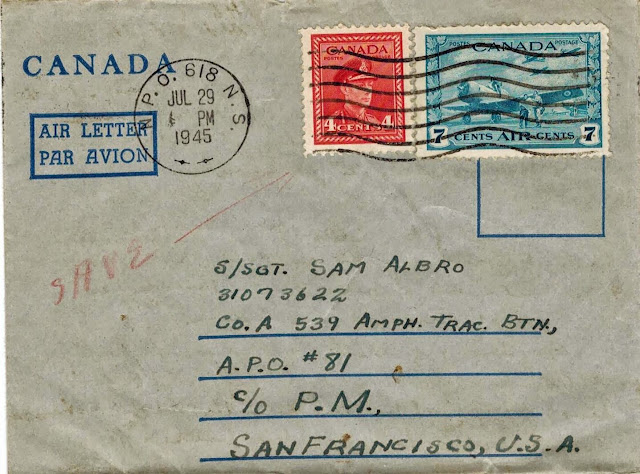 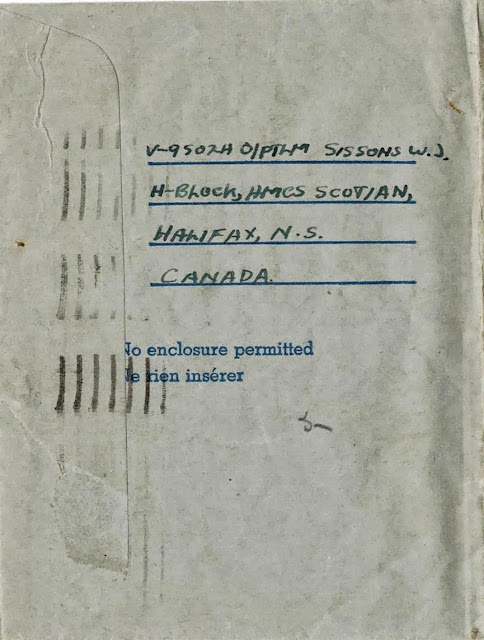 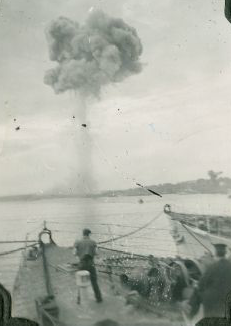 In the evening of July 18, 1945, an ammunition barge blew up at the naval magazine jetty on Bedford Basin, Halifax harbour. Fire spread quickly to adjacent piles of ammunition causing a chain reaction of fire, explosion and concussion rocked Halifax for a day.

This is the account written by Sissons in his air letter: 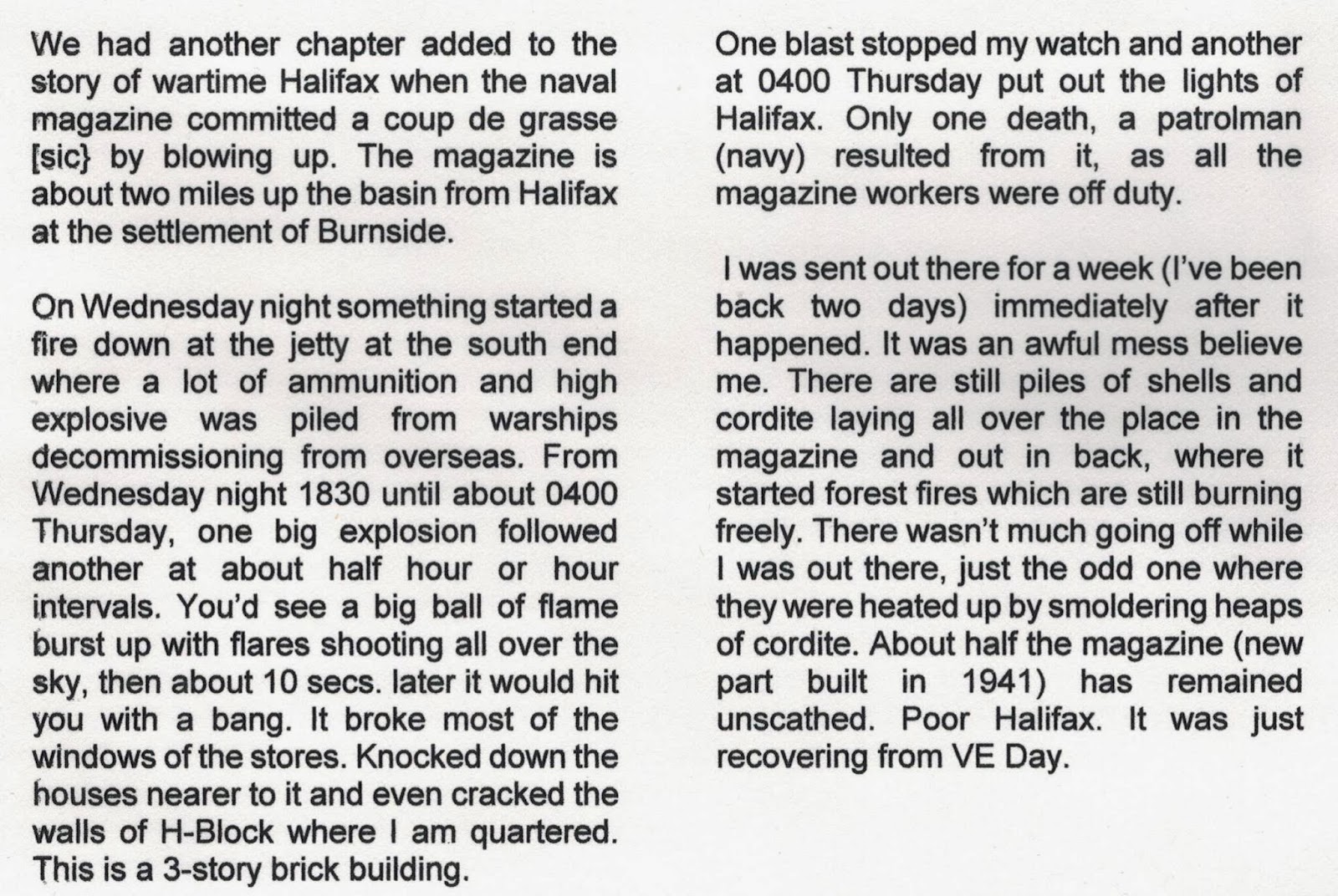 Sissons writes about the effect of the explosions on Halifax : "Poor Halifax. It was just recovering from VE Day." Sissons was referring to the V-E Day riots in Halifax described as follows by the Canadian War Museum on its web site:


The population of Halifax nearly doubled during the war as service personnel poured into the port city by the tens of thousands. Many of the military resented the overcrowding and strained facilities, and the way they believed themselves ignored by Halifax's permanent residents. Bad feelings, combined with the poor preparations of military and local authorities for VE Day, turned spontaneous celebrations into a rampage. Liquor stores and restaurants had been closed so that everyone could enjoy the holiday, leading thousands of sailors and soldiers, along with many civilians, to "liberate" liquor and beer on a big scale. This in turn fuelled large-scale vandalism and looting, both in Halifax and next-door Dartmouth. 564 businesses suffered damage and 207 shops were looted. Three rioters died. Some of the rioters received lengthy prison sentences from the local criminal courts, but most sentences were later reduced. A federal inquiry later blamed the navy for poor discipline of its personnel. The navy's top officer on the east coast was fired. 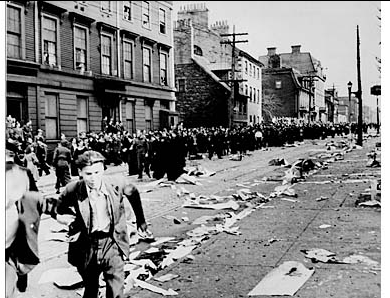 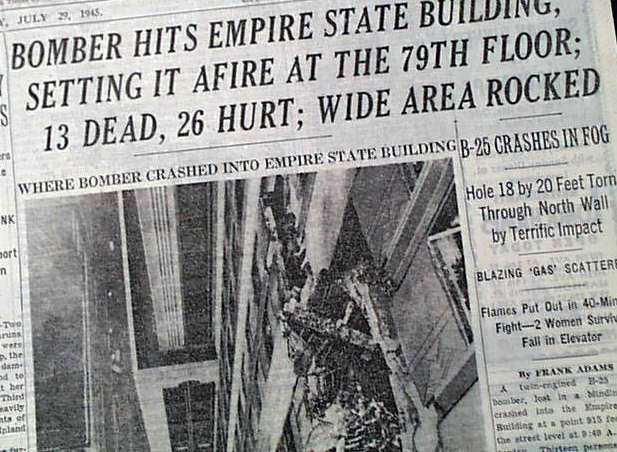 On Saturday, July 28, 1945, a B-25 Mitchell bomber lost in fog over Manhattan crashed into the 79th floor of the Empire State Building, killing 14 people. 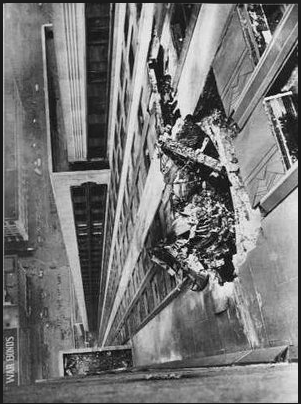 
It just came over the radio that an aiplane flew into the 70th or so story of the Empire State Bldg starting a fire with casualties.

Sissons and the addressee Sam Albro were both from Alberta and Sissons shares news he has received from his mother.

I just got a letter from mother. She said it was really hot out there. Averaging over 70 all week at over 90 on Thursday when it had the highest in Canada.

Gordon and Isabelle are apparently well settled in the Grenada Apts ( up from Eaton's store). They will be there until the end of September, when they hope to have their house of first street built. Gordon has bought a 1930 Ford coupe converted into a truck for his use in getting to the plant and for hauling lumber ( stored at the plant) for his house when he starts building.

Lorna just got back from her holidays last Sunday. She and a friend went by train up to Waterways or Ft. McMurray near Lake Athabaska in Northern Alberta. They apparently has a grand time all the way.

Minor (?) is at scout camp out from Edmonton. I guess he's really having a grand time because he's sent no letters home telling them about it mother said.

Tom is still at Kingston taking his army course. They appear to be working him hard, but he seems to be enjoying it. 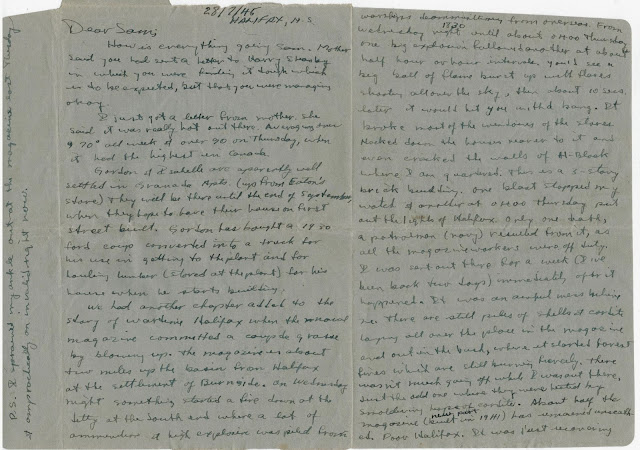 Reading the Sisson letter makes me want to know more.  Why did Sam wind up serving with American forces in the Philippines ? Did Gordon and Isabelle enjoy their new home? What happened to Jack after the war?  What was Lorna's relation to Jack?

Posted by philcovex at 4:27 AM