An earlier post dealt with the postal markings used at the Welland post office in the 19th and 20th centuries. This article looks at a some of the industries which were established in Welland during the 20th century making Welland a leading Canadian industrial centre and its citizens prosperous.

A 1947 survey of buying power covering all cities in Canada and the United States of over 10,000 population showed the average Welland family income, before taxes was $4,566, compared to the Ontario average of $3,670. The survey also found that the community's purchasing power was 68% above that of the average Canadian community regardless of size. (Welland Tribune, August 17, 1947).  Unfortunately most of the industries which contributed to Welland's economic success in the last century have now closed, ceasing operations entirely or  moving  to more profitable locations.

[Readers interested in exploring the topic further should get the following books authored by the late William L. Lewis: Aqueduct Merrittsville Welland : A History  of the City of Welland (3 volumes)]

The Frost Wire Fence Co, a branch of its Cleveland, U.S. parent company, manufactured wire fences and steel framed gates sold in England, Australia and Europe. The company built a two story brick factory in 1901, which would later become the site of Atlas Steels. In 1904 the company moved  to Hamilton, a better shipping location. 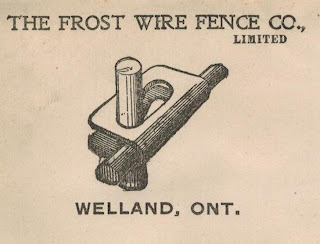 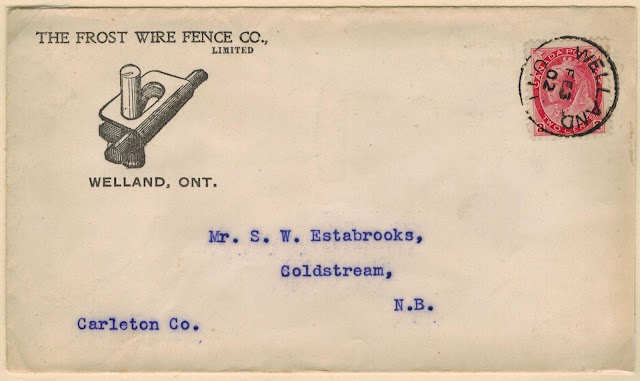 The Plymouth Cordage Company, producer of rope and twine, opened its Welland plant in 1906. High Canadian tariffs on rope provided the incentive for the U.S. based company to set up operations in Canada. Welland was selected because of its hydro-electric and transportation advantages. 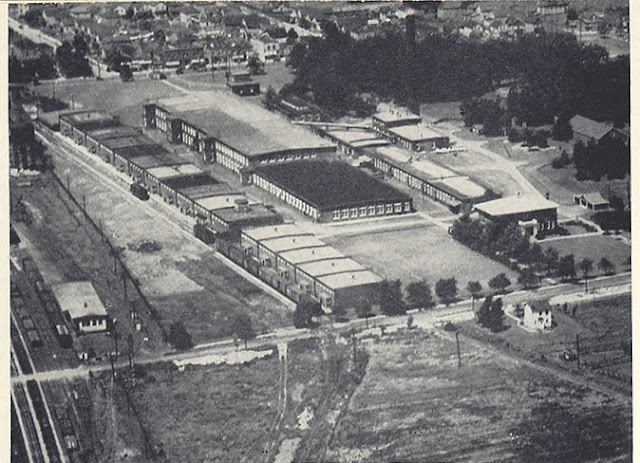 The "Cordage" employed up to 500 workers.  Housing and recreation facilities were provided for employees. Plymouth Cordage brought many Italian workers from Massachusetts and encouraged employees to invite relatives from the U.S. and Italy to work at the Welland plant. Thus began the ethnic diversity which we find in Welland today. Plymouth Cordage ceased operations in July 1969. 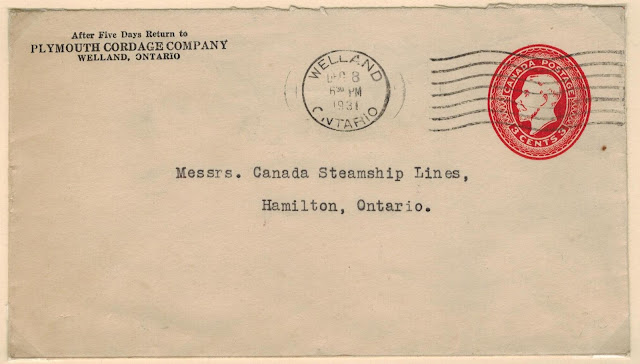 
[An interesting Harvard Business School article, The Corporation as Family, discusses how corporations such as Plymouth Cordage Company attempted to develop loyal and productive workers in the early 20th century.]

In 1907, the Titusville (Pensylvania) Forge Company established the Canada Forge Company in Welland. A second U.S. drop forge company, Billings and Spencer Ltd., also set up a factory in Welland which opened in 1907. The companies amalgamated in 1912 to form Canada Foundries and Forgings Limited.

Canada Foundries and Forgings Limited, now called Canada Forgings Inc., is the oldest manufacturing company still operating in Welland. The Company runs two plants, one for closed die forgings and the other for open die forgings. 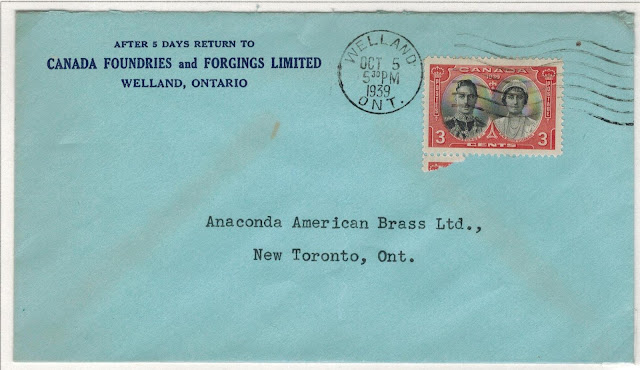 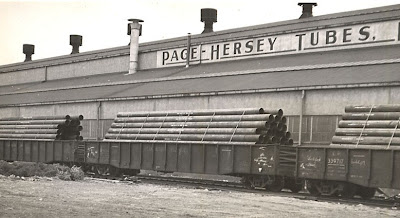 In 1910, Page-Hersey Iron Tube and Lead Company of Guelph opened a pipe manufacturing plant in Crowland Township, just outside Welland city limits. Page-Hersey was a major of supplier of pipe products during WWI. During the second world war, the company renamed as Page Hersey-Tubes,Limited, manufactured shells and mortars as well as tubing.In the 1950s, Page-Hersey pipes were shipped to Edmonton for the construction of the gas pipeline. 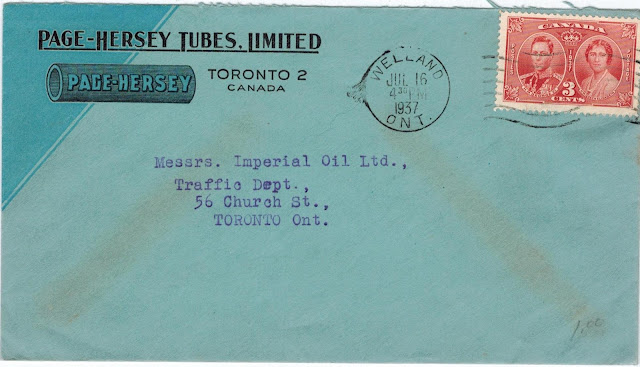 John Deere operated in Welland from 1911 to 2010 . Deere  closed its Welland plant putting 800 people out of work, and shifted its manufacturing to plants in the United States and Mexico.

In 1910, The Dain Manufacturing Company of Ottunwa, Iowa, established a Canadian plant in Welland for the manufacture of rakes and hay harvesting equipment. 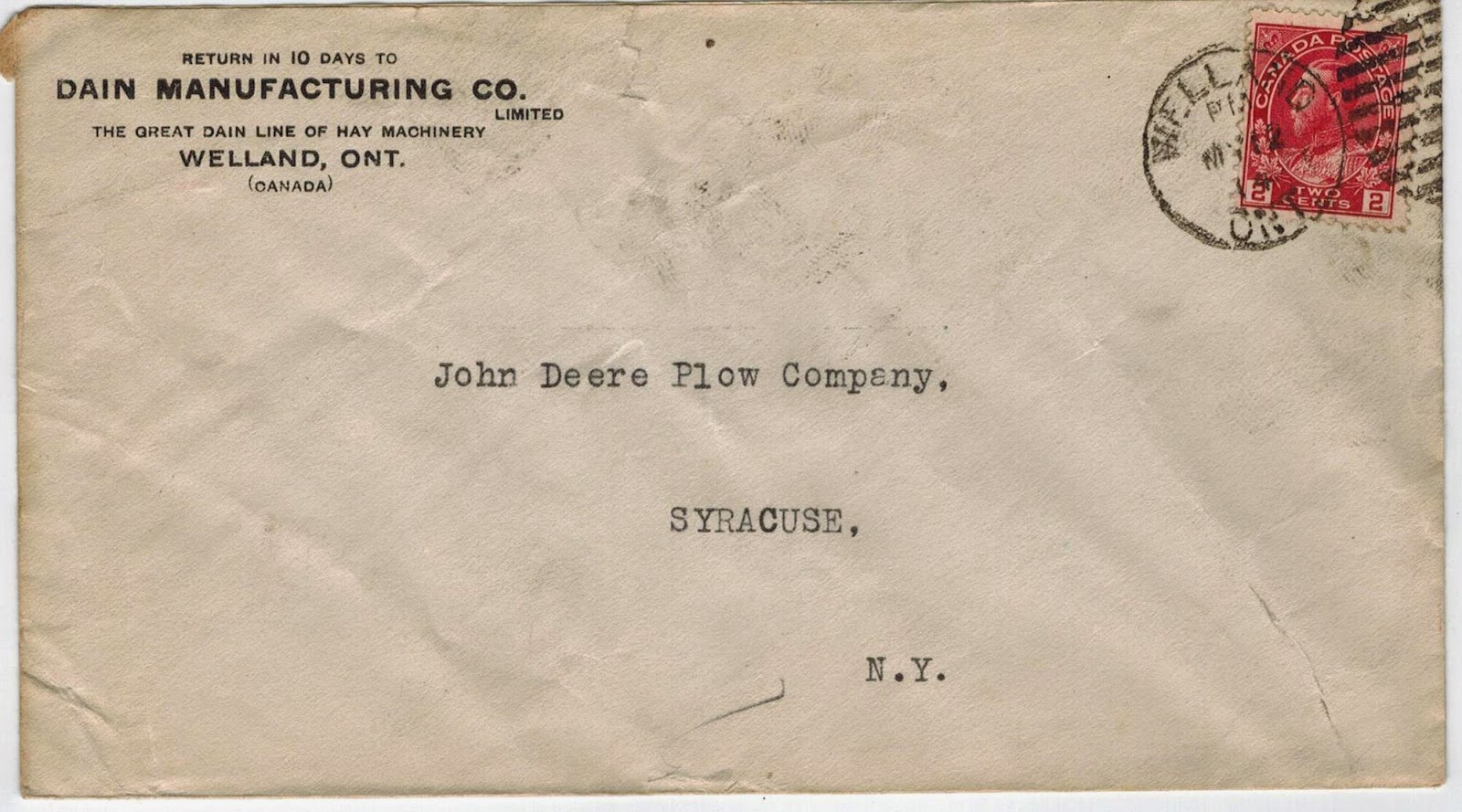 Welland to Syracuse, May 12, 1914
2 cents letter rate to the United States

In October 1911, the Dain Manufacturing Company was taken over by John Deere a maker of agricultural implements. 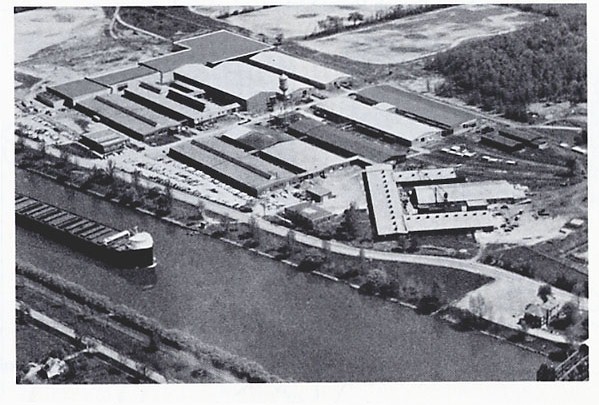 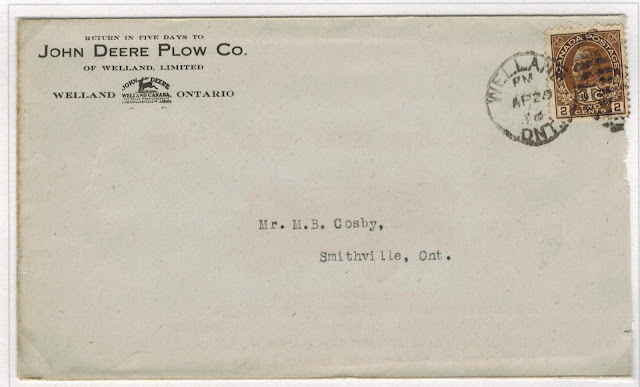 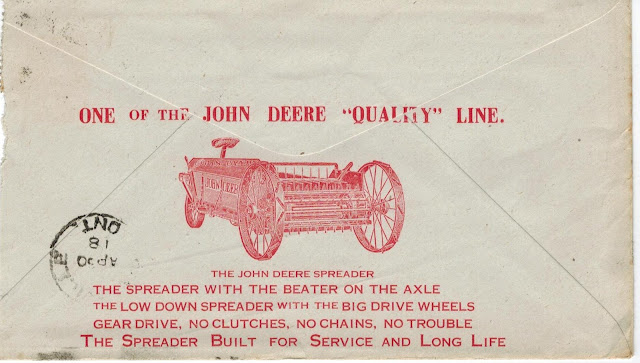 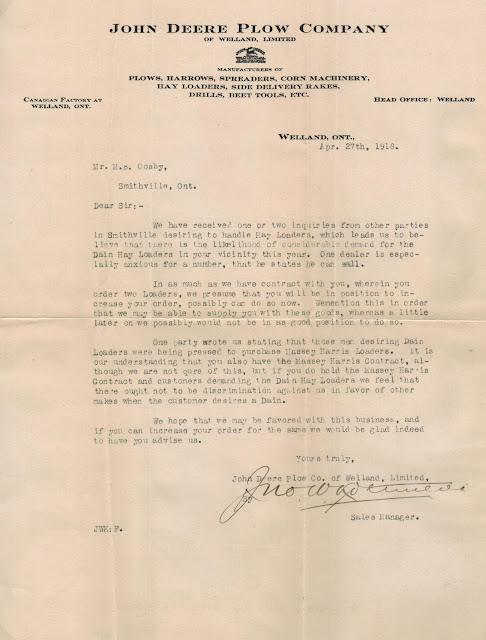 Empire Cotton Mills of Montreal established its Welland operation in 1913, attracting textile workers  from Quebec. Welland's large and vibrant francophone community traces its roots to the days of the "Cotton Mill". Wabasso Cotton Company took over the company in the late 1950s and continued its operation until 1985. 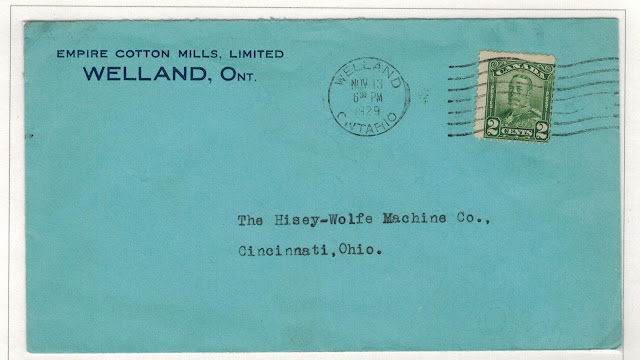 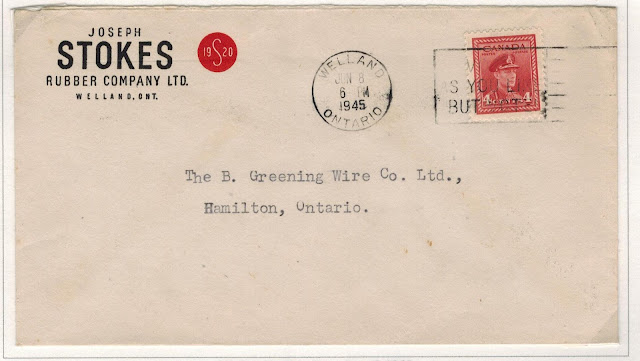 At one time Atlas Steels was Welland's largest employer. The company started with a few dozen workers in 1928 and had a workforce of 3,000 by 1942.The factory extended nearly a mile along the Canadian National Railway tracks. 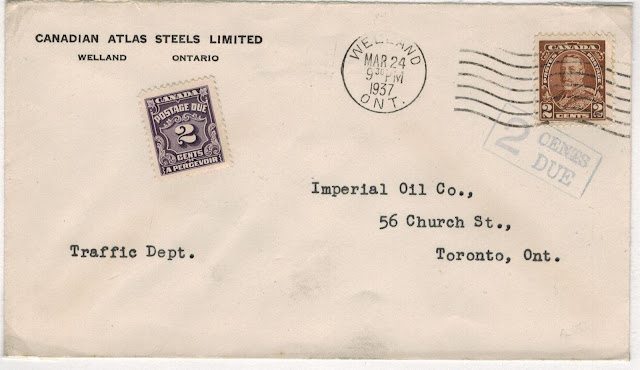 Posted by philcovex at 7:57 PM