In this post covers from 1910 and 1904 are shown to illustrate the application of UPU regulations with respect to redirected and insufficiently paid international mail.

Redirected international letters were not liable to additional postage unless redirected to an address requiring a higher rate of postage than the first address. The additional fee was either prepaid when the letter was redirected or postage due charges collected on delivery to the redirected address. Only the single deficiency was to be collected.

The letter below was mailed from Como, Quebec to Croydon, England, and was properly prepaid 2 cents, the rate to Britain. The letter was redirected to Lausanne, Switzerland, for which the rate from Canada would have been 5 cents. A charge of 15 centimes was levied by the Swiss post office which represented the difference between the amount of postage already paid and the postage which would have been paid if the letter had been originally sent to Switzerland. 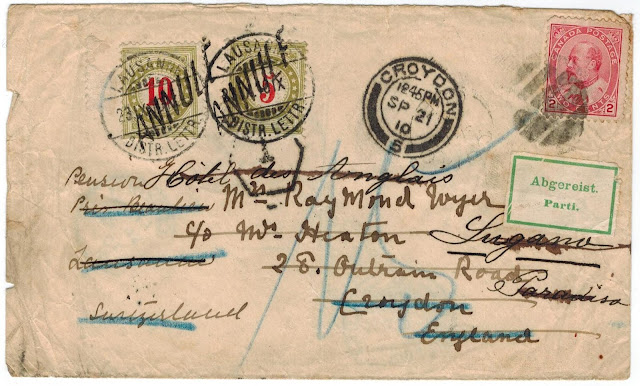 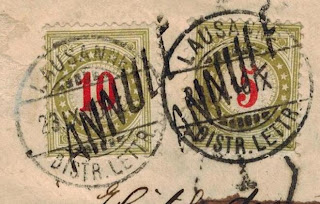 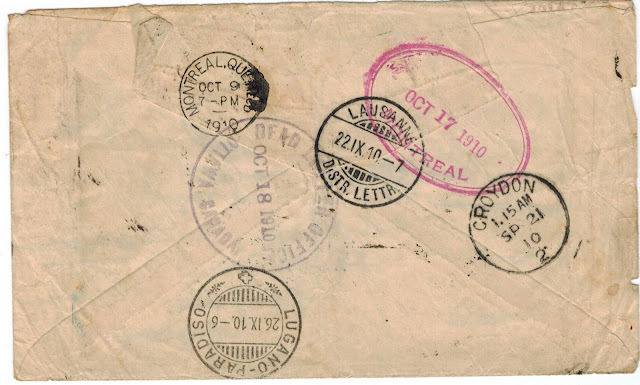 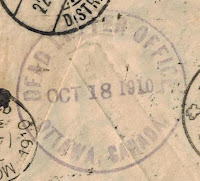 The tax on short paid letters and post cards was double the deficiency. Until 1907, the country of origin marked the letter with a "T" and the insufficiency (single amount) was expressed in centimes. The destination office charged the article with twice the insufficiency, converting centimes into its local currency, if necessary. In October, 1907, the terms of the UPU Convention of Rome came into effect. The method of marking short paid items was changed. The country of origin was to mark the short paid item with a T and double the amount of the insufficiency in centimes.

The post card below from Montreal to Milan posted in 1904 was short paid 1 cent. What is interesting to note is that the "T" marking was not applied in Canada but by the British post office in London. 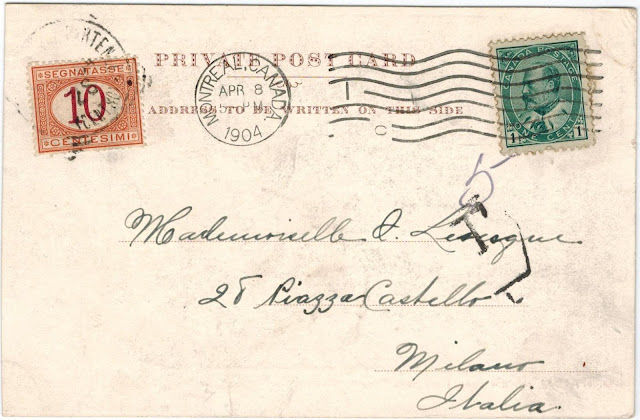 The amount to be collected in Italy was double the deficiency, i.e. 10 centimes. Since 25 centesimi (Italian) = 25 centimes, the amount due was 10 centisemi.
Posted by philcovex at 8:20 AM