A model of a $2.00 stamp commemorating Queen Elizabeth's Diamond Jubilee was unveiled in Ottawa recently. The stamp copies the design of the famous 1897 Queen Victoria Diamond Jubilee series. Unfortunately the engraving of the "2012" Queen is dreadful and must be changed before the stamp is issued. 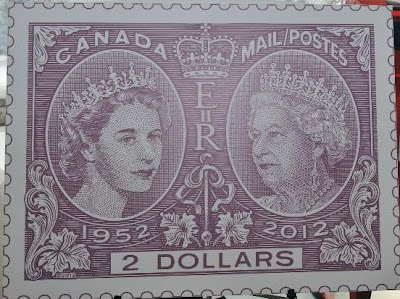 It appears that the well-known and lovely engraving by Silas Robert Allan for the 1954 "Wilding" definitive issue has been used as a model for the engraved image on the left. The new engraving is adequate but not particularly inspiring. A different photograph of the 1952 Queen should have been selected for the engraving. 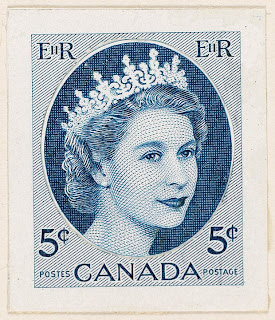 The most serious problem lies with the image of the "2012 Queen", on the right, engraved by Jose Peral . The engraving is unflattering and unappealing. Mr. Peral has engraved several stamps and banknotes in the past and has produced good work with landscapes, animals, and anonymous faces.

Jose Peral engraved the design of the $10 whale definitive

However, it is apparent that Mr. Peral's forte is not the human face: 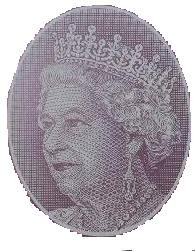 It is ironic that the Canada Post Office had the same problem (ugliness) in 1953 when it released the Coronation commemorative (The Coronation Issue : A New Low in Attractiveness) and the first Elizabethan definitives (Karsh Isssue) in 1953. Perhaps this time Canada Post can do it right.

Not surprisingly, Canada Post ignored my post and did issue the stamp "engraved" by Mr. Peral.
Posted by philcovex at 10:22 AM