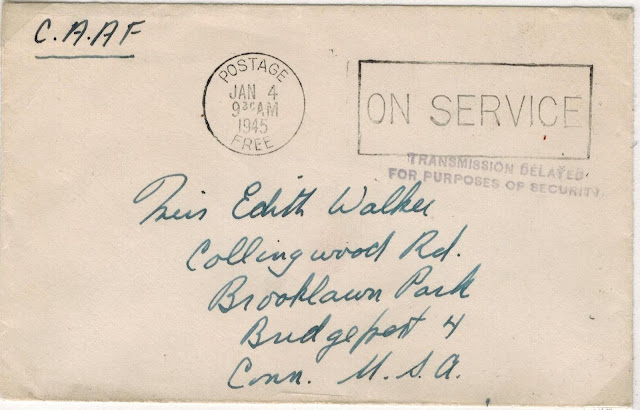 The cover shown below was mailed by a member of the C.A.A.F. (Canadian Army Active Force) to Bridgeport, Connecticut.

In addition to the date, January 4, 1945, the machine cancellation's hub contains the text "POSTAGE FREE". The slogan "ON SERVICE" explains why the postage was free.

A second interesting aspect of the cover is the "transmission delayed" handstamp:

TRANSMISSION DELAYED
FOR PURPOSES OF SECURITY

The serviceman who mailed this letter was likely being shipped overseas from Halifax, and the letter was detained until the convoy arrived at its destination.

The machine cancellation and transmission delayed handstamp were used in Halifax starting in 1941.
Posted by philcovex at 8:27 PM