[ A recent acquisition of a 1949 Canadian cover to St. Helena has inspired this posting] 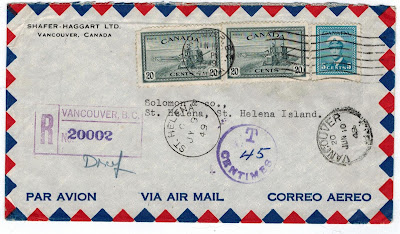 Saint Helena, the place of Napoleon Bonaparte's exile from 1815 until his death in 1821, is  located about midway between South America and Africa.. A British Crown  colony from 1834 to 1981, today  St. Helena is part of the British Overseas Territory of Saint Helena, Ascension, and Tristan de Cuha, Its reputation as one of the most isolated islands in the world should end in 2016 when St. Helena Airport, now under construction, is expected to open.


Prior to 1978, Union-Castle Line ships serviced Saint Helena. Since then, the British Government has operated ship service from Cape Town.

Transit time to England for the above cover was about one month.

At that time, Shafer-Haggart Ltd. (now Shafer Commodities Inc. an agricultural trading company) was an exporter of canned west coast salmon and fruits and vegetables. Solomon & Company has dominated the trade of St. Helena since it was founded by Saul Solomon in the late 1700s. Today, Solomon's is involved in all aspects of the island's economy such as wholesaling, retailing, bulk fuel, bakeries, insurance, building, financial services, butchery and livestock. The St. Helena government bought a 32% share of Solomon's in 1968. 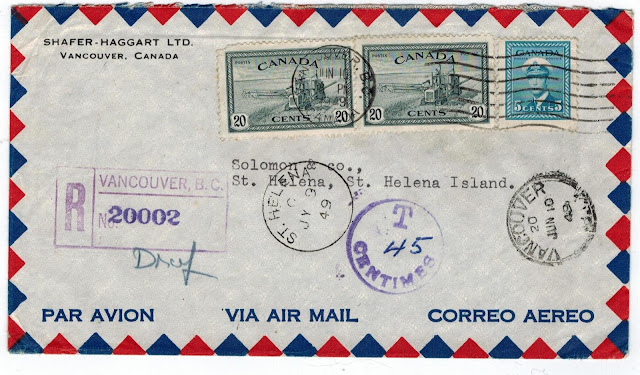 Assuming this was a registered, double weight ( one-half ounce) lette,r the total amount to be prepaid would have been 60 cents:

The amount affixed, 45 cents, was insufficient to prepay the postage and registration fee. The letter was taxed 45 centimes by the Canadian post office.

Since the letter was registered, the following section of the Canada Official Postal Guide would have applied:


363. Registered articles are subject , in addition to regular postage, to a special registration fee of 10 cents to be prepaid by postage stamps. If, however, unpaid or insufficiently prepaid registered letters or postcards addressed to a Postal Union Country have been inadvertently accepted, they will be forwarded to destination under registration subject to collection on delivery of single the total deficiency as regards postage and registration fee.


The amount due was therefore 15 cents or 45 gold centimes. 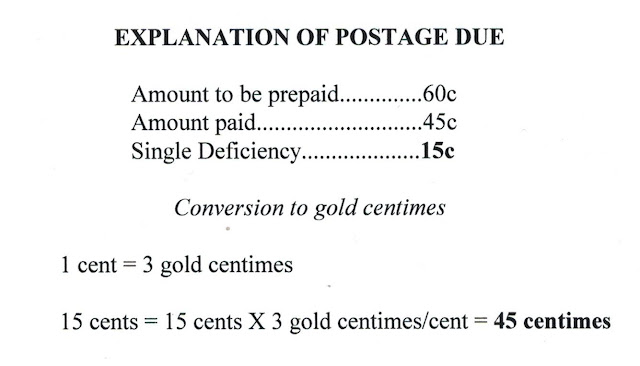 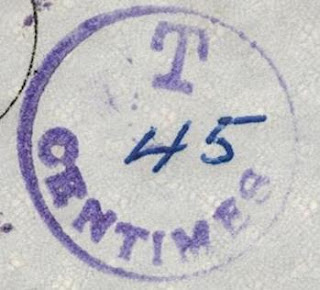 The registration may not have been requested by the sender but was assumed by the Vancouver post office, and which therefore resulted in single rather than double deficiency taxation. There is no indication that the St. Helena post office charged the addressee.

The transit time of one month for an air mail letter from Canada to St. Helena was slow,

The transit time of one month for an air mail letter from Canada to St. Helena was slow,but the surface letter mailed from Toronto in 1949 took 2 months to arrive at St. Helena! 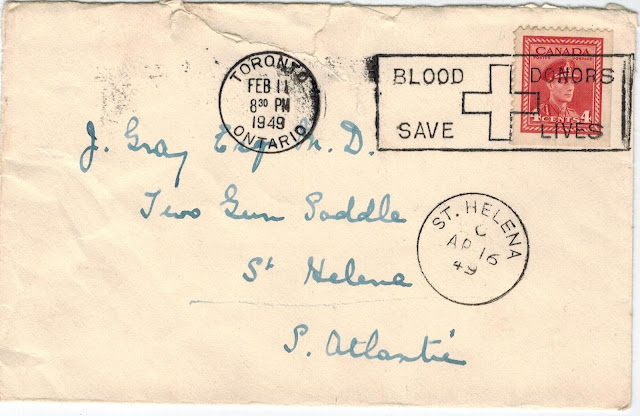