Canadian troops of "C" force were sent to Hong Kong in November, 1941 to reinforce the colony's defences from possible Japanese attack.

Of the 1,975 Canadians from the Royal Rifles and Winnipeg Grenadiers who went to Hong Kong, approximately 290 Canadian soldiers were killed in battle. Those who survived the battle became Prisoners Of War (POWs) and many endured torture and starvation by their Japanese captors. Approximately 264 more died while in captivity, for a total death toll of 554. In addition, almost 500 Canadians were wounded.

In the prison camps, Canadian POWs became weak and malnourished from a starvation diet. They lived in primitive huts and were forced to work in construction projects, shipyards and mines.

The cover below was mailed from Winnipeg on November 16, 1942, to Private Morris Peterson of the Winnipeg Grenadiers who had been "Taken Prisoner of War in Hong Kong". 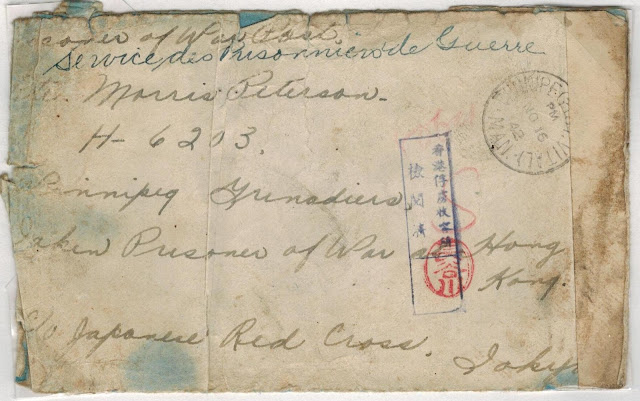 The Sai Wan War Cemetery locate in Chai Wan, Hong Kong contains the graves of the soldiers who died during the Battle of Hong Kong.

The Hong Kong Memorial Wall, unveiled in Ottawa  on August 15 2009,  is a six-metre granite wall, etched with the names of all the Canadians who fought in the Battle of Hong Kong.  On one side are the names of the 961 members of the Royal Rifles, and on the other side are the names of 911 Winnipeg Grenadiers.  The 106 members of brigade headquarters, including doctors, dentists and chaplins, are listed on either end of the memorial.

Posted by philcovex at 8:27 AM