A cover is an historical artifact which captures a moment in Canadian history. The cover which is the subject of today's post takes us to World War II and the Canadian textile industry, and serves as a catalyst to learn more about St. Stephen, New Brunswick. 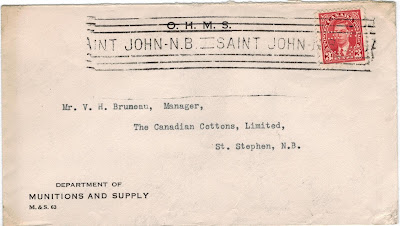 The cover was sent by the Department of Munitions and Supply in St. John, N.B., to The Canadian Cottons, Limited (Canadian Cottons), St. Stephen, N.B. The 3 cent letter rate was prepaid with a "Mufti" definitive stamp which had been perforated with the initials OHMS. A dated cancellation should have been used to obliterate the stamp but in this case the undated SAINT JOHN N.B. roller cancellation was applied.

Commercial covers obtained by collectors rarely contain the correspondence and the above cover is no exception. However, it is likely that it concerns the supply of textiles from Canadian Cottons for the war effort.

A "MILLTOWN, N.B." circular date stamp cancellation was applied to the back of the cover on February 11, 1942. 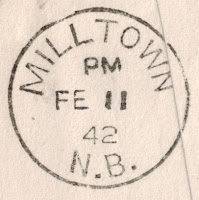 Milltown, a town adjacent to St. Stephen, was the site of Canadian Cottons, which explains the Milltown receiver cancellation.(St. Stephen and Milltown amalgamated in 1973 to form St. Stephen) 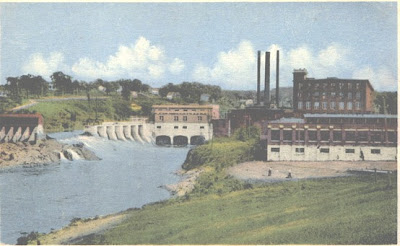 St. Stephen is on the St. Croix River across from Calais, Maine. Since the late 1700s, the towns have maintained close economic and social relationships. (A book published in 1875 provides a delightful flavour of those ties.) 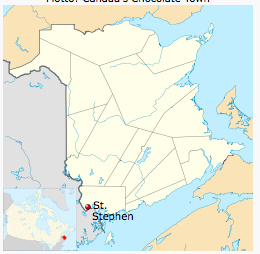 St. Stephen's economy was centered on the lumber and ship building economy until the late 1800s. Milltown was the site of several lumber and grist mills.In early 1880 a group of lumber merchants began promoting a large cotton mill because the market for New Brunswick lumber had collapsed in the 1870s. The St Croix Cotton Manufacturing Company (later Canadian Cottons, Limited) opened its mill, the second largest in Canada, in 1882. The mill closed in 1957.

Labour History In New Brunswick (LHTNB) , a joint University-Community organization, has this description of the Milltown Cotton Mill on its website:


The mill was one of the biggest and longest-operating cotton mills in the province and attracted workers from all parts of New Brunswick as well as from other provinces and England, Scotland and the United States. By 1950 about 1,000 workers were employed there. The mill is known in New Brunswick labour history for its record of labour activism, which goes back to the early years in the 1880s. In the 1950s the workers' union, Local 858, Textile Workers' Union of America, played a leading part in community efforts to save the mill from the shutdowns that were affecting the entire Canadian textile industry.

A volunteer group led by Bill Eagan, whose mother and father both worked at the mill, raised over $180,00 for a monument paying tribute tribute to the Millworkers. On October 6 2007, the Milltown Cotton Mill Workers Monument was officially unveiled featuring a bronze statue by sculptor Peter Bustin which portrays millworkers sharing a moment together during their workday. 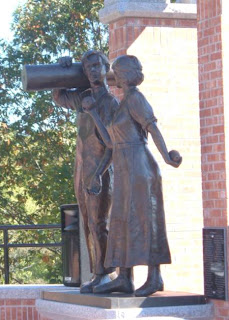 A female worker holds spindles of cotton yarn while a male worker heaves a bolt of woven cotton onto his shoulder. 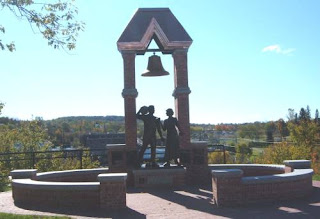 The Monument and its surroundings

The St. Stephen monument and the efforts of LHTNB should serve as models for communities across the country wishing to pay tribute to their labour history.

The story of St. Stephen isn't complete without talking about chocolate. In 1873 chocolate manufacturer, Ganong Bos. Limited, was founded in St. Stephen, and unlike the cotton mill is still going strong with its head office and manufacturing facilities located in St. Stephen. In 1999 a Chocolate Museum opened showcasing Ganong's history. 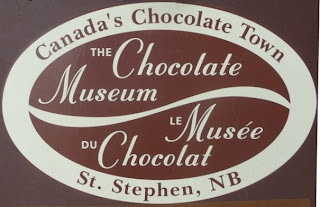 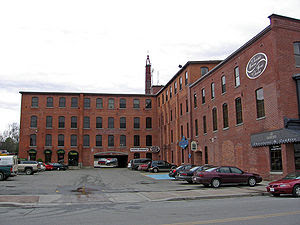 The Chocolate Museum, is housed in the old Ganong factory. 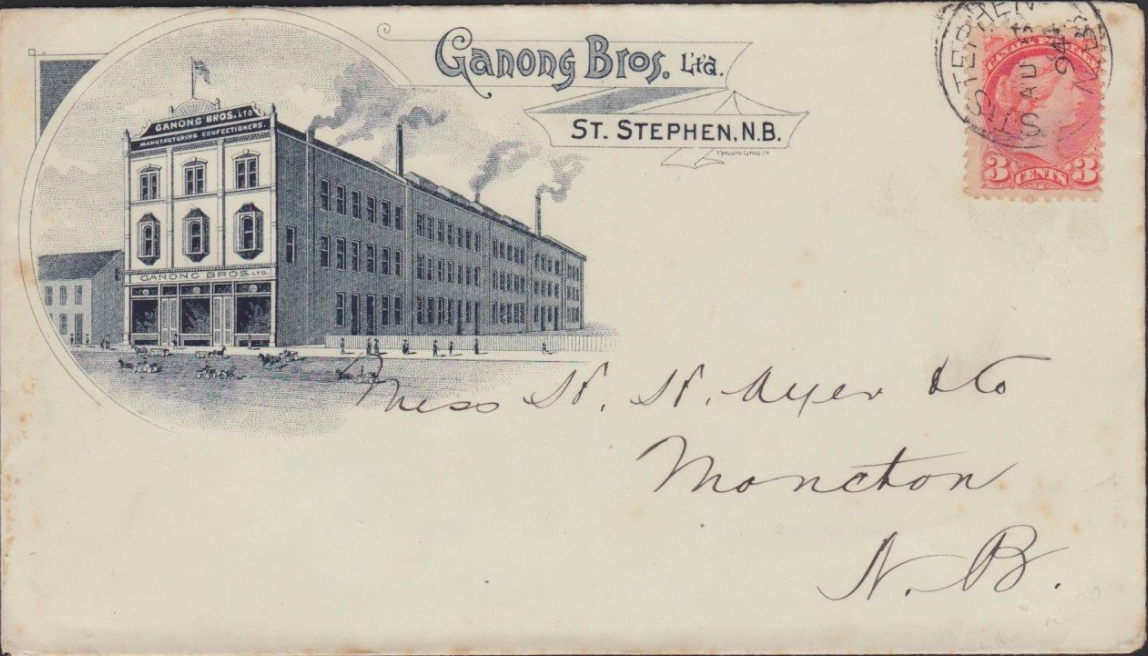 NOT IN AUTHOR'S COLLECTION 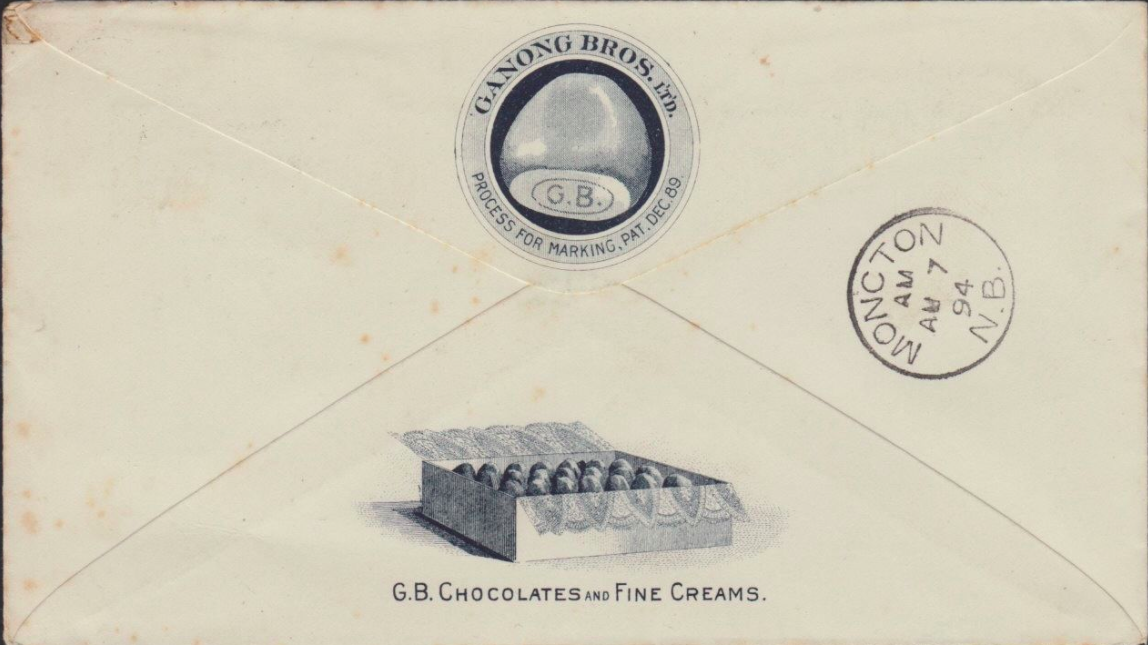 NOT IN AUTHOR'S COLLECTION

In 2000, St. Stephen was officially registered as ‘Canada’s Chocolate Town’ as a mark of the importance of chocolate in its past and present. St. Stephen's chocolate heritage is celebrated annually during its Chocolate Fest held the first full week of August.

This post which began as as analysis of a cover mailed in 1942 grew into a story going back to the 18th century, taking us to the present day. It is remarkable how a postal cover can spark such an exploration.
Posted by philcovex at 9:51 AM