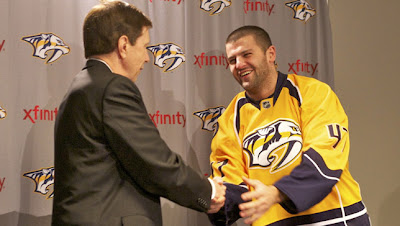 On March 21, 2012, Nashville Predators President of Hockey Operations/General Manager David Poile announced that forward Alexander Radulov would be rejoining the team effective immediately. This post provides a philatelic element to this story. First though, a bit of Radulov history.

Russian born Alexander Radulov started his North American hockey career playing for the Quebec Rempars of the Quebec Major Junior Hockey League. In his years in the Quebec League he was absolutely amazing. He delivered an incredible performance in the Remparts' 2006 Memorial Cup championship game victory over the Moncton Wildcats. In the 6–2 win, he scored two goals and assisted on three more, winning the Stafford Smythe Memorial Trophy as the tournament MVP.

Radulov was signed to a three-year NHL contract by the National Hockey League's (NHL) Nashville Predators in 2006 and began his professional career with the Predator's farm team, the Milwaukee Admirals of the American Hockey League (AHL). He was called up in 2006 and played most of the 2006-2007 season and the complete 2007-2008 season with the Predators scoring a total of 44 goals as a Predator.

In his third contract year with the Predators, Radulov stunned the sports world when he announced that he would he had signed a three-year deal with Salavat Yulaev Ufa of the newly created Russian Kontinental Hockey League (KHL). According to the Nashville Predator press release:

Radulov and the Predators have reconciled their differrences and Radulov has agree to play under the final season of his three-year entry level contract signed in 2006.

Radulov represented Russia in the last five World Championships, winning titles in both 2008 and 2009. It is his success with the Russian National team in the 2008 International Ice Hockey Federation World Championship which leads us to the philatelic side of this story.

The 2008 IIHF World Championship was played between May 2 and May 18, 2008 in Halifax and Quebec City. Russia won the tournament defeating Canada in the gold medal round. 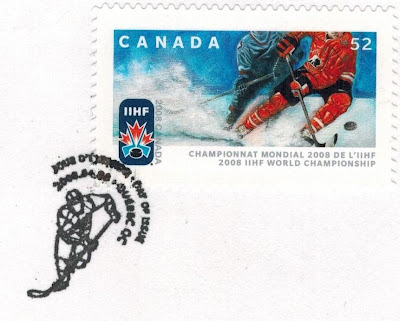 On April 3, 2008, one month before the Championship series began, Canada Post issued a stamp commemorating the event, designed by Lionel Gadoury and Dave Hurds and based on an illustration by Ho Che Anderson.

Canada Post provided this description of the stamp's design:

Based on an illustration by Ho Che Anderson, this dynamic image captures the energy and excitement of the game at its best. "With this stamp we wanted to highlight the game, not individual players," says Liz Wong, Manager of Stamp Design and Production at Canada Post. But that proved a challenge, because hockey in Canada is so closely associated with its star players. Designers Lionel Gadoury and Dave Hurds solved the problem by avoiding photography on the stamp. "An illustration can be more generally representative," says Gadoury, "and it also allowed us to create an iconic image with a heroic quality." This approach was designed to appeal particularly to young hockey fans and stamp collectors, he says. "We hoped to capture what kids are seeing in the cards they collect and in video games - a slightly exaggerated, comic-book style." Anderson is also a comic book illustrator, and his style fit the bill. His original stamp illustration conveys a sense of power and action, with much drama in the contrasts of white ice and a darkly silhouetted background player. The asymmetrical placement of the players gives a sense of speed, and the wider image dimensions offer a panorama that heightens the drama.

I prepared first day cover envelopes, affixed the IIHF stamps and forwarded them to the National Philatelic Centre in Antigonish to have the "Day of Issue" cancellation applied. Two cancellations were available, one for each of the host cities, Halifax and Quebec.

Stamp designers Lionel Gadoury and Dave Hurds kindly signed the covers which featured their contribution and are shown below: 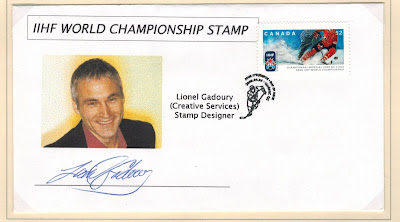 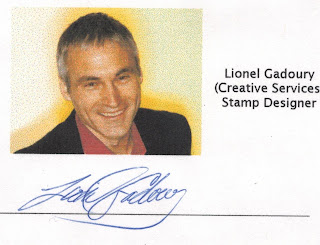 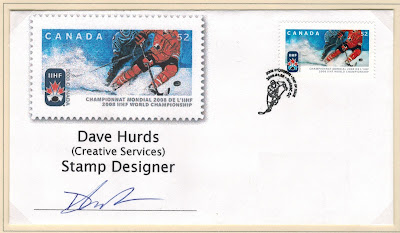 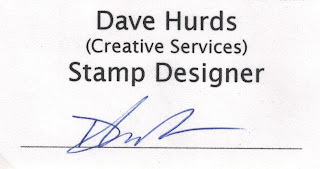 I thought it would be great to have a hockey player sign a first day cover. I sent a cover before the start of the tournament to the tournament's press relations officer in Quebec City asking her if she could obtain an autograph for me. I did not expect a response and was surprised and pleased to see that she had obtained Alexander Radulov's autograph. I imagine that she had known him from his earlier stay with the Quebec Remparts. 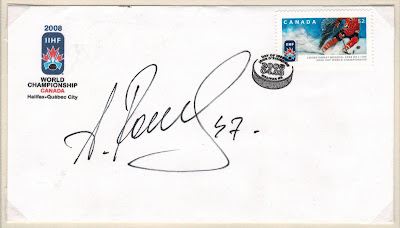 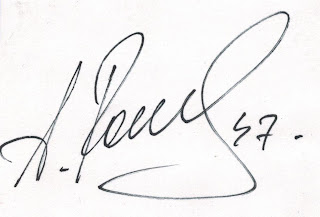 
I've always appreciated the kindness of Mr. Radulov and the designers and the tournament press officer for their cooperation. The covers are great hockey souvenirs.