The cover below is an example of an S.S. River Denis cover with a fake paquebot cancellation. 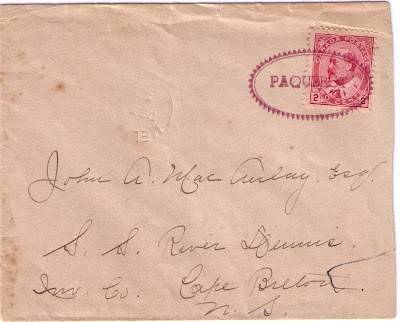 I don't know what the perpetrator's motives were, but his fakes continue to be sold as genuine items. I have advised one large U.S. auction house and two eBay vendors within the past few months that their S.S. River Dennis covers were fakes. Fortunately, the auction house withdrew the lot. One disingenuous eBay vendor told me he didn't know what to do with the information. I suggest that holders of these fakes mark them as such in indelible ink. If put up for sale, they should be identified as being fakes, fantasies, fraudulent items, or whatever.

The Maritime Postmark Society journal, the Seaposter had an article in it's 3-4/2008 edition titled "Cover Fakery with S.S. River Dennis". Unfortunately only the title of the article is available online.
Posted by philcovex at 8:16 AM