The Coronation Issue 1953
"A New Low in Attractiveness"

May and June 1953 were difficult times for Canada Post Office officials responsible for approving stamp designs. The press and the public were highly critical of the Queen Elizabeth definitive stamps (Karsh Issue) released on May 1, 1953, and of the Coronation commemorative stamp issued a month later. As discussed in an earlier post, the problem with the Karsh definitives was not the actual design but the engraving of the Queen's portrait. The Canadian Bank Note Company engraving was poorly executed and bore only a passing resemblance to the Queen. The criticism caused the Post Office to replace the Karsh definitives within a year.

The second design catastrophe facing the Post Office was the Coronation commemorative issued on June 1, 1953 based on a sculpted profile of the Queen: 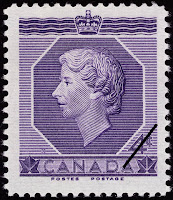 The stamp was criticized even before it was issued. A Toronto newspaper called it an "atrocity". After its release, in a column titled "Mediocrity in the Post Office", the editor of BNA Topics wrote, "the persons or persons responsible for the design of recent Canadian issues have certainly hit a new low in attractiveness of design and in the overall effect". The editor reported receiving the following comments from BNAPS members:

"I don't know to whom to write and let off steam about the God-awful mess which was delivered to us this morning in the shape of a 4 cent stamp."

"Can't the B.N.A. Society get up a petition or send a bomb to the Postmaster-General which will wake him up a bit?"

"I have just been sending off airmail first day covers to England and I am so ashamed of the stamps that I am putting an apology inside."

"She should try Gillette Blue Blades for this 5 o'clock shadow. What a mess!"

The purpose of this post is to provide an explanation for the design failure of the Coronation commemorative.

The Coronation stamp was designed by Emmanual Otto Hahn who had earlier created the striking $1.00 "Totem Pole" stamp and the attractive "Wildlife" stamps of 1953. 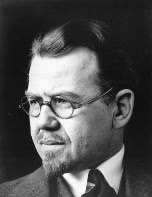 Hahn was a renowned sculptor who was well-known for his design of Canadian coins. For his design of the Coronation stamp, Hahn drew upon his sculpting talent to create a sculptured profile of the Queen which he used for the Queen's image rather than a photograph from life.

Hahn used a photograph taken by Karsh in 1951. The original photograph (below left) was a pyramidal profile. When Prince Philip pointed out that correct usage would require that both heads be on the same level, Karsh replied that he would like temporarily to make this his own design.
(Life Magazine, October 1, 1951) 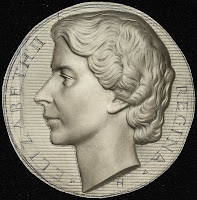 National Archives of Canada
Sculpture based on the Karsh profile photograph 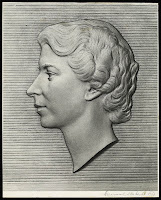 The essays below capture the three-dimensional effect of the sculpture: 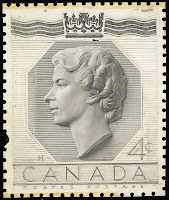 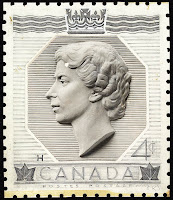 Unfortunately, engraving could not produce a convincing three-dimensional cameo effect. This was not the fault of the engraver who in this case was master engraver Silas Robert Allen.

The progress proofs below show how Allen tried to create the desired sculpted effect. 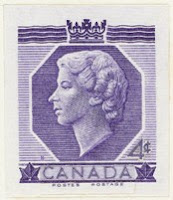 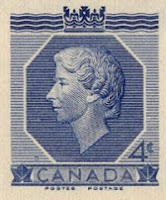 Despite Allen's best effort he was unable to translate Hahn's design because of line engraving's limitations. This is apparent if we consider the Machin definitives.

The Machin Sculpture and Photogravure

In 1968, the United Kingdom issued a definitive stamp based on a sculpture by designer Arnold Machin. Unlike the Canadian Coronation commemorative, the Machin design was admired and the Machin stamps have remained in production since 1968 making the Machin sculpture the most-reproduced work of art in history with over 300 billion stamps printed.

In a 1981 Arnold Machin gave a talk at the National Postal Museum and explained how the Penny Black, the world's first postage stamp, inspired his design of the Queen Elizabeth stamp.

The Penny Black is remarkable for its simplicity and elegance, and if it is thought that my design has captured something of these qualities I have cause to be flattered by your remarks. After 141 years the Penny Black still remains the one unchallenged masterpiece of the philatelic world, and so when I was asked to submit designs for the present stamp I thought it would be helpful to me in solving the design if I could discover why it was so satisfactory and so lasting.

One of the things that intrigued me was the fact that the Penny Black, as you know, is a portrait of the very young Queen Victoria yet it remained unchanged throughout her long reign without at any time appearing incongruous. If this youthful portrait had been a photograph, no matter how beautiful or how well designed, I am sure it would have had to have been changed from time to time as the Queen grew older. 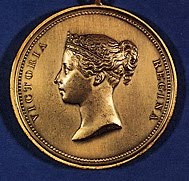 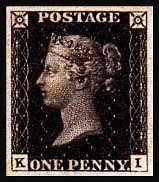 But this portrait was, in fact, skillfully engraved from a very fine sculptured coin relief by Wyon, and this method produced not only a good portrait but created a classical and timeless symbol of Royalty.

It was this observation that made me realize that the best result would be achieved by a similar approach and so I based my design on a sculptured relief rather than a photograph from life; but because the technique of stamp production has changed from the days of the Penny Black, which was engraved, the modern photogravure technique makes it possible to produce a more convincing three dimensional cameo effect, and this was what I was aiming for.

The problem with the 1953 Coronation stamp, then, was not in the design nor with the engraving. The Coronation stamp was a failure because line engraving was not a suitable technique to produce a cameo effect. The photogravure technique, not available in Canada, would have produced the stamp Emmanuel Hahn was aiming for.
Posted by philcovex at 1:16 AM