During the Vietnam war, letters and cards mailed by U.S. servicemen to Canadian addresses were mailable free of postage. Free Mail to Canada was introduced by the U.S. Post Office on March 1, 1966 but not all postal employees were aware of the privilege and some free mail was incorrectly rated for collection of postage due from the Canadian addressees. Postal employees were advised of the situation in the August 18, 1966 issue of the Postal Bulletin: 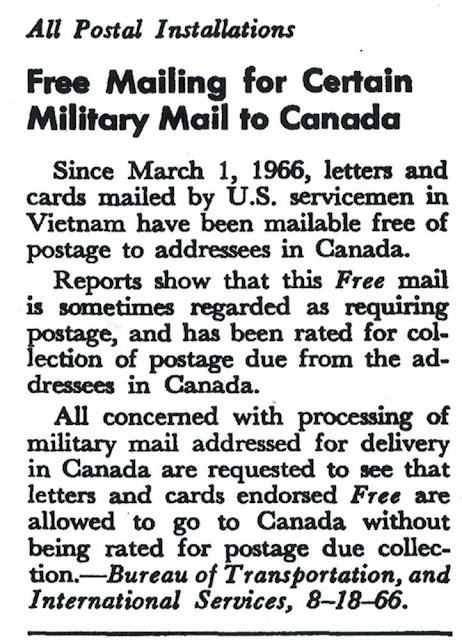 The cover shown below is an example of free U.S. military mail from Vietnam to Canada. The letter was mailed in 1968 from the 65th Engineering Battalion, 25th Infantry Division (U.S. Army) base camp at Cu Chi, to Joseph E. Seagram and Sons, Waterloo, Ont. 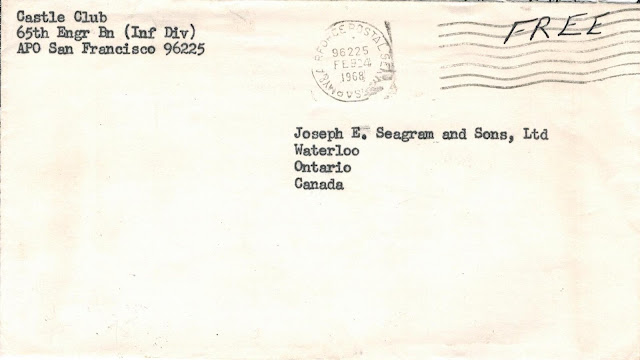 APO number 96225 was assigned to the 25th Infantry Division

The "Castle Club" was an enlisted men's club for the
65th Engr. Bn. at Cu Chi

The Cu Chi base, about 40 miles northwest of Saigon, was one of the six most important American military establishments in Vietnam. It was the headquarters for the whole area to the north-west of Saigon towards Cambodia. 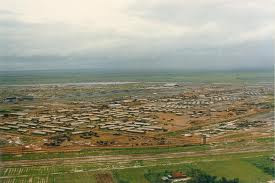 From 1966 to 1970, the 25th Division fought the North Vietnamese Army and the Viet Cong north and west of Saigon.

In 1965, the Battalion deployed to Vietnam and during its deployment participated in twelve Vietnam campaigns, receiving a Meritorious Unit Commendation, two awards of the Republic of Vietnam Cross of Gallantry, and the Civil Action Honor Medal. The Battalion departed Vietnam in December 1970.

Posted by philcovex at 5:24 AM