This post deals with franking and free mail privileges in Canada to 1875. Mail posted as Canadian governance evolved from colonial to Dominion status are shown. It should be noted that this post should serve as an introduction rather than as a comprehensive treatise of the subject.

Postmasters were granted the privilege of free mail transmission as described in Art. XIII of Instructions to a Deputy Postmaster 1830 :


Your own bona fide postage to the extent of Double Letters, or half ounce packages, you are authorized to have free, but you have not the right of franking except at your own post office, and...that Postmasters, when exercising this right of franking their Letters are expected to write their names on the face of the Letter at the top.


The examples shown below were mailed by Upper Canada postmasters. The first letter was mailed on October 29, 1831, by Joseph Wheatly the postmaster of Howard (Kent County) to the postmaster of Vittoria. The Howard office was opened in 1831 and operated under that name until 1851 when it was renamed Morpeth. 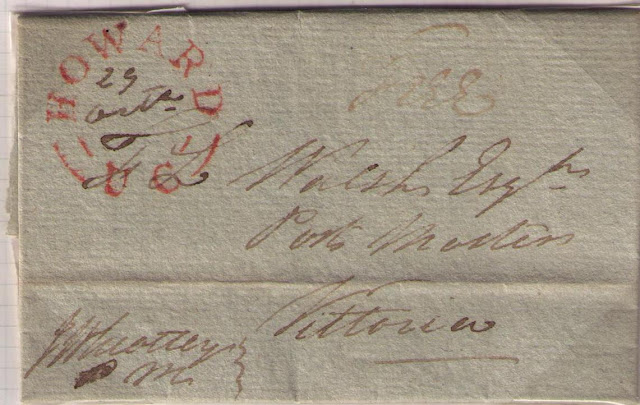 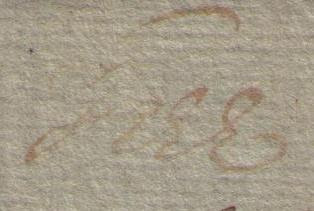 
Postmaster Wilson Mills of Delaware (Middlesex West) mailed the next letter (shown below) addressed to the postmaster at Queenston, on January 5, 1839. 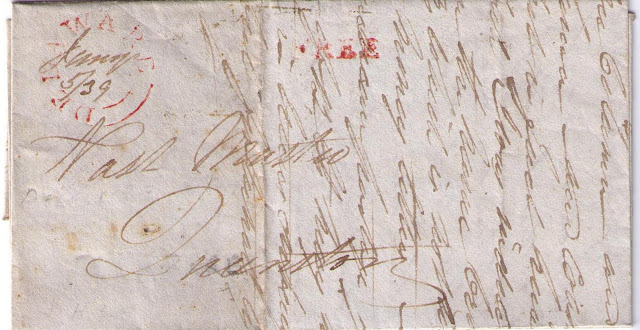 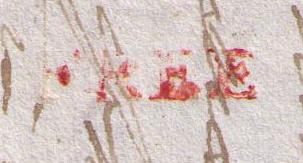 The third letter was mailed by Peter Keefer, the Thorold (Welland county) postmaster, to the Receiver General's Office, Toronto, on July 6, 1840. 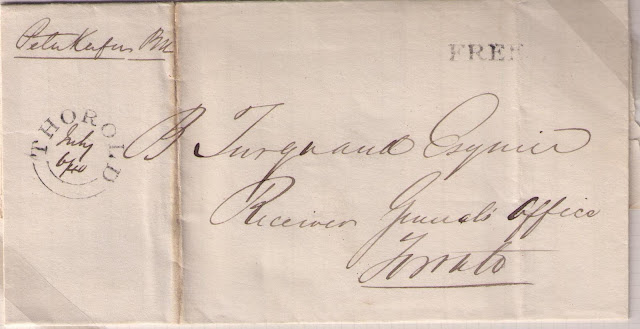 On March 15, 1839, the House of Assembly requested that the Lieutenant General (Sir George Arthur) provide information regarding the Court of Requests:

In response to the request, the Lieutenant General's office transmitted the following letter to Commissioners of the Court of Requests: 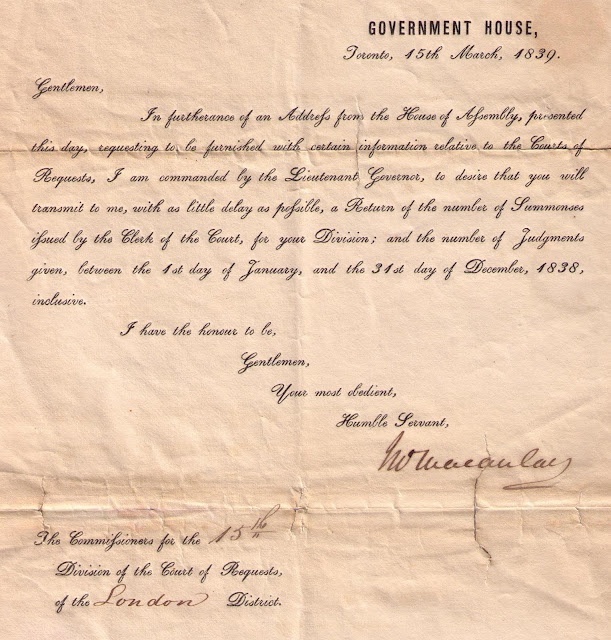 In furtherance of an Address from the House of Assembly, presented this day, requesting to be furnished with certain information relative to the Courts of Requests, I am commanded by the Lieutenant Governor to desire that you will transmit to me, with as little delay as possible, a Return of Summonses issued by the Clerk of the Court, for your division... Macaulay

The above letter was mailed free from Government House, Toronto, March 15, 1839, to the 15th Division, Court of Requests, London District. 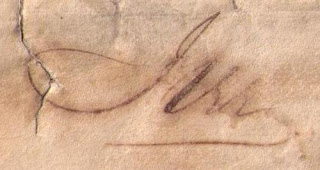 The letter was redirected to Stratford from London on March 21, 1839. 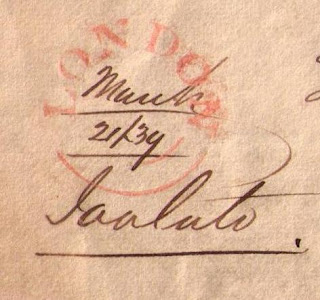 The letter below was mailed by David Roblin, Member of the Legislature for the Canada West riding of Lennox Adddington during the 6th Parliament of the Province of Canada. Sessions of the 6th Parliament were held in Toronto in 1858 and then in Quebec from 1859 to 1861. 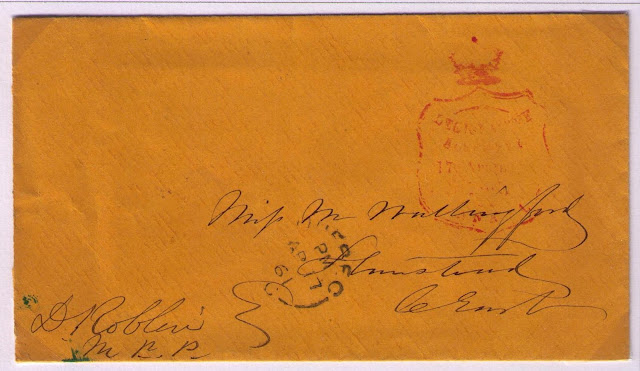 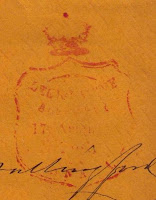 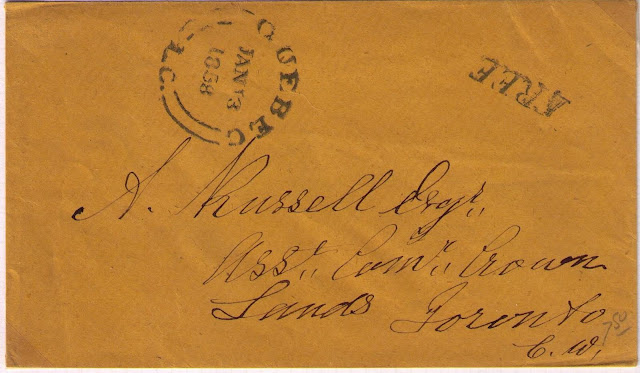 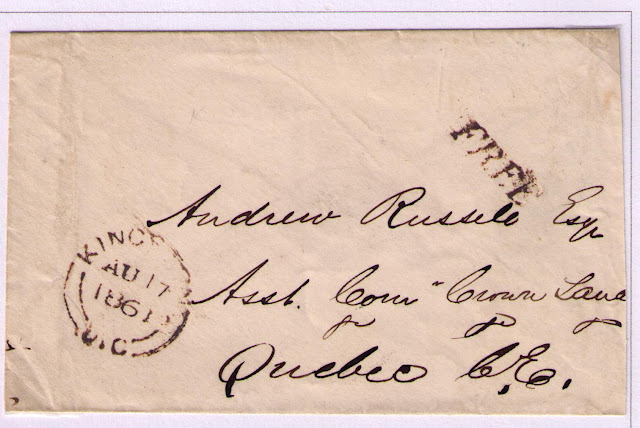 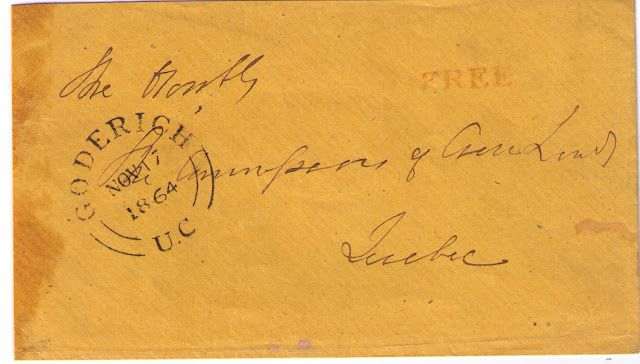 Goderich to the Commissioner of Crown Lands, Quebec, November 17, 1861 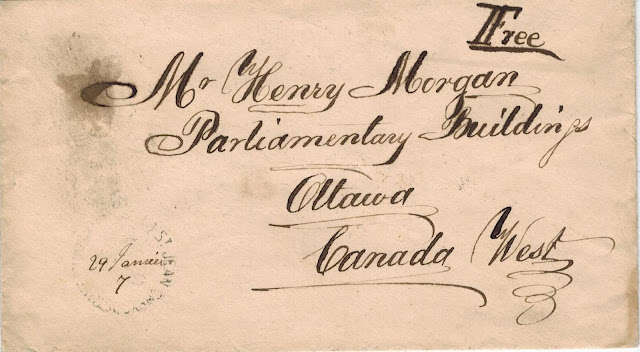 In 1867, the Provinces of Canada, New Brunswick, and Nova Scotia joined to form the Dominion of Canada.

All letters or other mailable matters addressed to or sent by any Department of the Government at the seat of Government, at Ottawa, was exempt from Canadian Postage. (The Post Office Act 1867, s. 207) 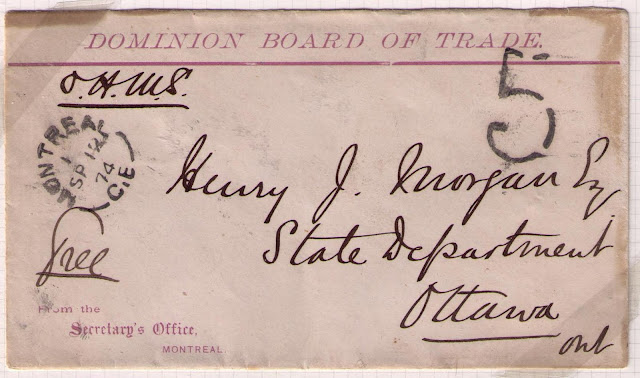 The above letter sent from the Dominion Board of Trade in Montreal on September 12, 1874, to the State Department, Ottawa was exempt from postage. However, it was not unusual for such letters to be incorrectly rated. Here we see that an unpaid 5 cents handstamp was applied by the Montreal post office. Recognition of the free status of the letter was subsequently noted in manuscript: 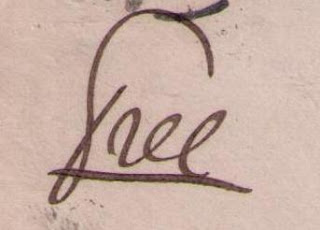 b) Members of the House of Commons

All letters and other mailable matter addressed to or by any Member of the Senate of of the House of Commons at the seat of government during any session of Parliament or during the ten days preceding the meeting of Parliament were exempt from Canadian postage. (The Post Office Act 1867, s. 207)

From Members of Parliament

John Bolton, Member of Parliament for the riding of Charlotte, New Brunswick, mailed the letter below to Mrs. John Bolton, Calais, Maine, on December 9, 1867. Since the franking privilege had effect only with respect to Canadian postal rates, this letter should have been prepaid. 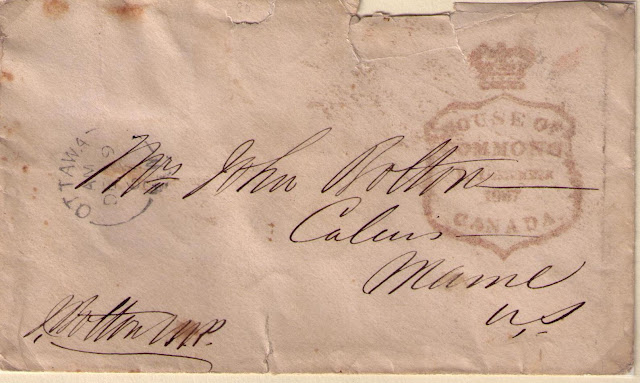 House of Commons Shield postmark, December 9, 1867.
This letter should have been prepaid. 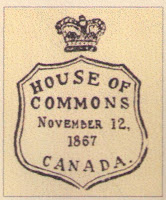 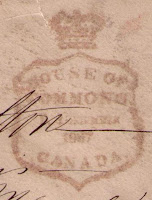 Jarrett tracing of the House of Commons shield postmark (left)


The second letter was mailed to a Canadian address and correctly sent free. By 1870, an attractive House of Commons "Free" post mark had been introduced. 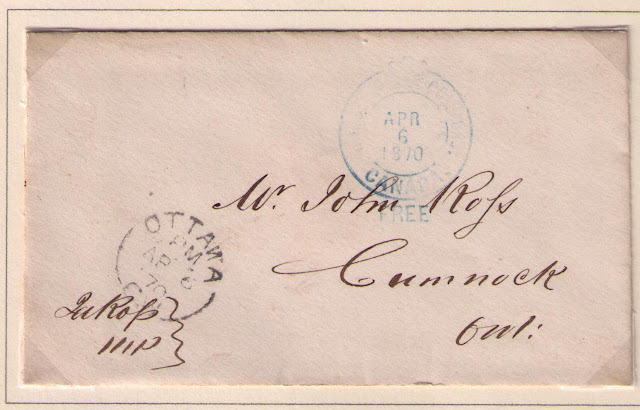 From James Ross, Member of Parliament for the Ontario riding of Wellington Centre.
House of Commons, April 6, 1870 to Cumnock, Ontario, April 6, 1870
(Cumnock is an Ontario "ghost town" today) 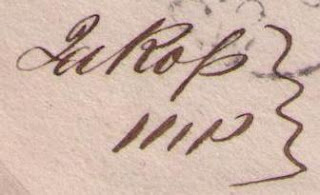 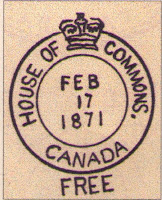 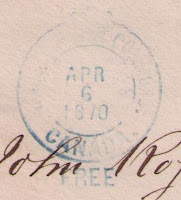 
To Members of Parliament 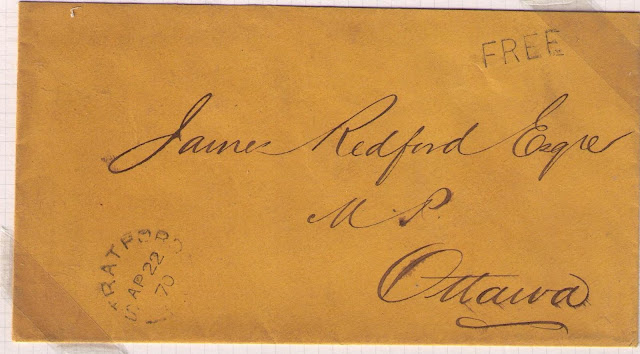