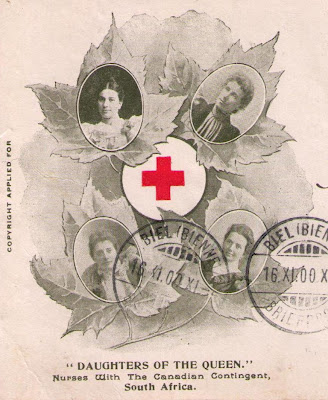 Canada sent troops overseas for the first time to serve in the South African (Boer) War. From 1899 to 1902, over 7000 Canadians including 12 nurses served overseas. The first group of nurses sailed with the Second Canadian Contingent, arriving in Capetown between February 17 and March 21, 1900. There were four nurses : Miss D. Hercum, Miss M. Horne, Miss M. Macdonald and Miss M.P. Richardson. The nurses were assigned to Col. G.S. Ryerson, Canadian Commissioner of the British Red Cross Society and saw active service stationed at Bloemfontein.

Ed Richardson wrote about Boer War auxiliary service covers in a 1956 BNAPS Topics article, from which much of the information used for this post has been obtained.

"Daughters of the Queen" cover

Among the patriotics discussed in the Richardson article was a cover prepared for the Red Cross Society of Canada which was described as follows:

In sepia green, miniature portraits of the four nurses appear superimposed upon four maple leaves, arranged around the emblem and words in red, "Red Cross Society." At the bottom is a legend, in three lines: "DAUGHTERS OF THE QUEEN"/ Nurses With The Canadian Contingent/ South Africa. Along the left end of the envelope and reading up is "Authorized for the benefit of the Society,-Copyright apld."


The cover shown in Mr. Richardson's article was mailed from Toronto on September 11, 1900.

The design of the post card shown below is similar to the cover described by Mr. Richardson except that all written references to the Red Cross Society have been omitted and "ADDRESS ONLY THIS SIDE" was printed on the front of the card. 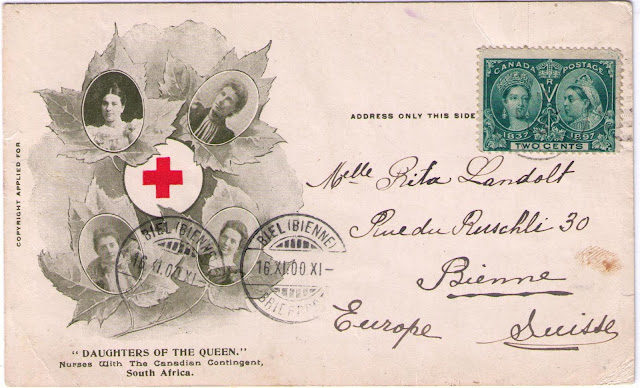 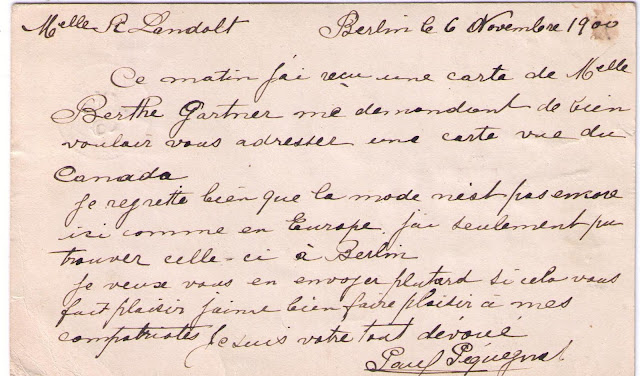 The sender writes that he had received a post card that morning from Miss Bertha Gartner requesting that he send a Canadian illustrated post card to the addressee, Ms Landolt. He tells Miss Landolt that these cards weren't yet popular in Canada as they were in Europe and advises that he was only able to obtain this card in Berlin!
Posted by philcovex at 2:08 AM