On January 17, 2000,  Canada Post issued a stamp for its "Millenniun Collection" honoring Vienna-born endocrinologist Hans Selye (1907-1982) whose scientific work at the Université de Montréal  greatly increased our understanding of the biological factors causing stress and of how to control it. 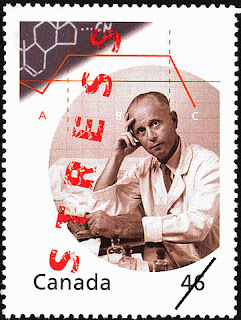 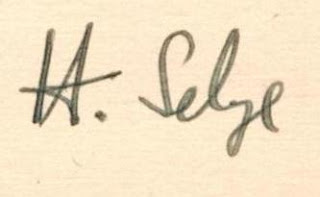 The Canadian Institute of Stress , founded by Dr. Selye, provides this biography on its website:


Hans Selye is internationally acknowledged as "the father of the stress field" and, as such, a Canadian resource to the world. Since publishing the first scientific paper to identify and define "stress" in 1936, Dr. Selye wrote more than 1700 scholarly papers and 39 books on the subject. At the time of his death in late 1982, his work had been cited in more than 362,000 scientific papers, and in countless popular magazine stories, in most major languages and in all countries worldwide. He is still by far the world's most frequently cited author on stress topics.

Dr. Selye gained enduring international respect not only for his scientific innovations, but equally for his commitment to sharing the practical benefits of his work with everyday people. Two of his books, "The Stress of Life" and "Stress Without Distress" were unequalled bestsellers (the latter in 17 languages). His collaborative research with Dr. Richard Earle, resulted in his two final contributions "Stress and the Workplace" and "Your Vitality Quotient".

The postcard shown below, signed by Dr. Selye. is a request for a reprint of a scientific article written by Dr. R. Choisy in Rev. Med. de la Suisse Romande. 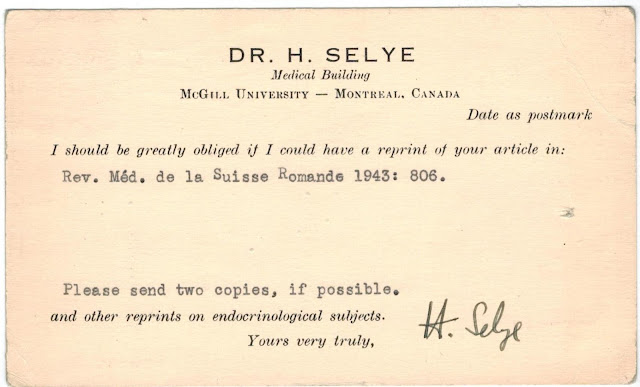